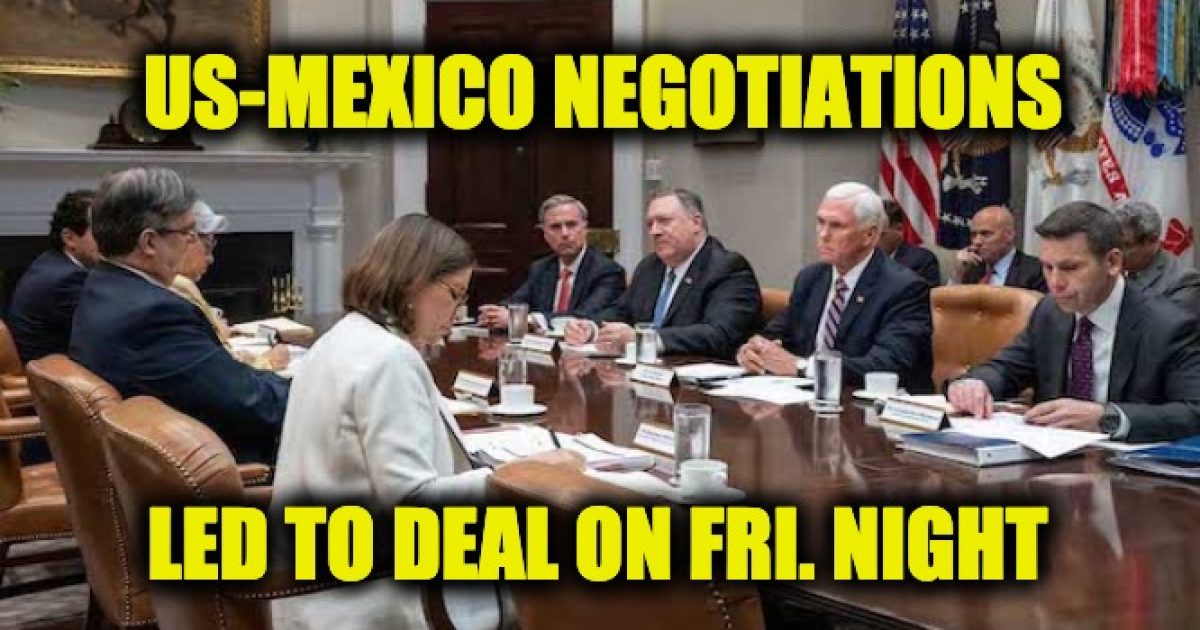 With agreement on the last-minute deal, Mexico avoided being saddled with tariffs. President had promised to impose tariffs beginning Monday, June 10th on all Mexican goods if they didn’t come up with a plan to stem the tide of illegal immigrants coming into the U.S., But late Friday night, the State Department announced a deal was made, and the tariffs will be taken off the table indefinitely, once again proving the president’s skill at the “Art of the Deal.”

But wait! On Saturday the New York Times said, Nay, Nay that deal was made in March, the president used an old agreement to back out of the upcoming tariffs that may hurt the American economy, and would be especially difficult for those Americans addicted to avocados and guacamole.

Is the NY Times correct? No! It’s not surprising that the Times published fake news, they do that often. But this story is worse. This time their report is sneakily fake–they took something that was almost true and spun into a big lie.

Friday’s joint declaration says Mexico agreed to the “deployment of its National Guard throughout Mexico, giving priority to its southern border.”

But the Mexican government had already pledged to do that in March during secret talks in Miami between Kirstjen Nielsen, then the secretary of homeland security, and Olga Sanchez, the Mexican secretary of the interior, the officials said.

If there was a prior agreement, where was it?  One rule of International deals is precisely the same as in business,” any contract that is only verbal and not written down is worth the cost of the paper it’s printed on,”  Not only was this announcement written down but it was issued as a joint announcement in conjunction with Mexico.

Actions are worth more than words. If this deal was made in March,  why didn’t Mexico start moving National Guard Troops to its southern border until Friday, June 7th, the date the State Dept.and Mexico issued their joint announcement outlining their deal?

The centerpiece of Mr. Trump’s deal was an expansion of a program to allow asylum-seekers to remain in Mexico while their legal cases proceed. But that arrangement was reached in December in a pair of painstakingly negotiated diplomatic notes that the two countries exchanged. Ms. Nielsen announced the Migrant Protection Protocols during a hearing of the House Judiciary Committee five days before Christmas.

That is true. But the NY Times probably didn’t read what the Joint Announcement. The two countries didn’t claim this was a new program, it said the deal expands the program. Specifically, the announcement said,

The United States will immediately expandthe implementation of the existing Migrant Protection Protocols across its entire Southern Border.” This means that those crossing the U.S. Southern Border to seek asylum will be rapidly returned to Mexico where they may await the adjudication of their asylum claims.

In response, Mexico will authorize the entrance of all of those individuals for humanitarian reasons, in compliance with its international obligations, while they await the adjudication of their asylum claims. Mexico will also offer jobs, healthcare, and education according to its principles.

The President says there are more elements of the deal with Mexico that have yet to be released.

…..Mexico was not being cooperative on the Border in things we had, or didn’t have, and now I have full confidence, especially after speaking to their President yesterday, that they will be very cooperative and want to get the job properly done. Importantly, some things…..

…..there is not, we can always go back to our previous, very profitable, position of Tariffs – But I don’t believe that will be necessary. The Failing @nytimes, & ratings challenged @CNN, will do anything possible to see our Country fail! They are truly The Enemy of the People!

The NY Times story is reminiscent of an old joke about Microsoft:

A helicopter was flying around above Seattle when an electrical malfunction disabled all of the aircraft’s electronic navigation and communications equipment. Due to the clouds and haze, the pilot could not determine the helicopter’s position and course to fly to the airport. The pilot saw a tall building, flew toward it, circled, drew a handwritten sign, and held it in the helicopter’s window. The pilot’s sign said “WHERE AM I?” in large letters. People in the tall building quickly responded to the aircraft, drew a large sign and held it in a building window. Their sign read: “YOU ARE IN A HELICOPTER.” The pilot smiled, waved, looked at her map, determined the course to steer to SEATAC airport, and landed safely. After they were on the ground, the co-pilot asked the pilot how the “YOU ARE IN A HELICOPTER” sign helped determine their position. The pilot responded, “I knew that had to be the Microsoft building because, like their technical support, online help and product documentation, the response they gave me was technically correct but completely useless.”

The NY Times about the Mexico deal was technically correct-nearly correct but spun into a lie–a huge lie.