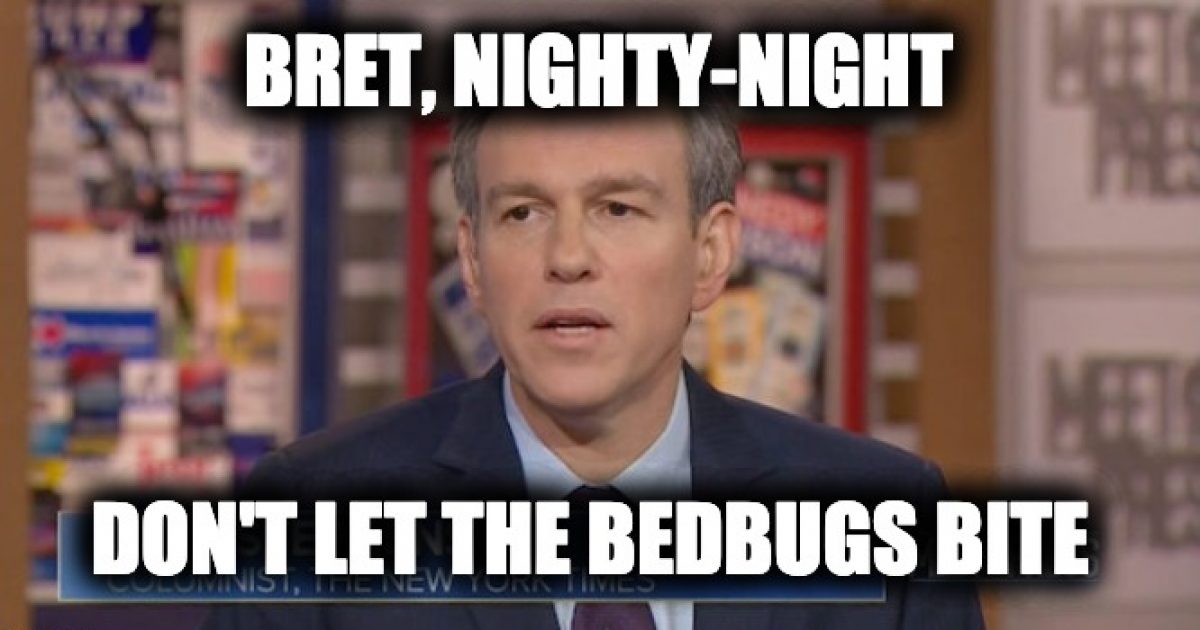 The New York Times, the bible of progressivism, is facing intense ridicule after an internal memo noted that the newsroom is infested with bedbugs. One Times writer, Bret Stephens really lost it after being called a bedbug.

The internal memo was leaked to the New York Post:

According to an internal memo obtained by The Post, the NY Times said it “discovered evidence of bedbugs in a wellness room on the second floor, a couch on the third floor and a booth on the fourth floor.”

“In an abundance of caution, the second-floor room has been temporarily closed, the booth has been blocked off and the couch has been removed to be treated and professionally cleaned,” the memo said. Exterminators also swept the area, according to the memo.

The Post also noted that the wellness room and furniture “were all added to make the place feel more, oh, startupy and digital and youthful back in 2017,” one source sarcastically noted. “You wouldn’t have had any of this stuff in the old newsroom of chairs and desks.”

But some crucial questions were not answered. How long has the NY Times been infested with bedbugs?  Do bedbug bites make one biased, or worse do they force people to make up stories as is the tradition of the NY Times? Why haven’t the rats who run amok in the newsroom eaten the bedbugs? Is it possible the bedbugs have been messing with the brains of NY Times writers for decades? If the bedbugs affected the newsroom, did they also get into the brains of other liberal media like the Washington Post or MSNBC?

See I told you the bedbugs went to other Liberal media headquarters:

Must be why Jen Rubin is so crabby.

And all this time I’ve been thinking the rats in the newsroom were the problem.

My reaction to Bret Stephens just now discovering that people are mean on Twitter. #BretBug pic.twitter.com/gVrweCDiYL

The New York Times is infested with bed bugs? Karma is a bitch! What’s next? Rats?

Bret Stephens was a popular target.

What a jerk, he copied the guys boss, the provost.

I had to ask a question,

@bretstephensNY Hey Bret if I come to your house to call you a bedbug to your face, will you feed me? Kosher food? I will bring desert.

When asked which desert, I reminded him that I keep Kosher so I would probably bring the Negev.

I would have copied Bret’s boss, but the NY Times doesn’t believe in talking to or reading information from conservatives.

Yes, but if you get rid of them then who is going to write the news articles? #RAID

This guffaw-inducing situation comes days after the paper’s editor, Dean Baquet, was heard on an audio recording admitting that he built his paper entirely around the fake “Russia” hoax story and is now stuck with where to take the paper since the “collusion” accusation has been debunked. But on the bright side, this bed bug report is not fake news.