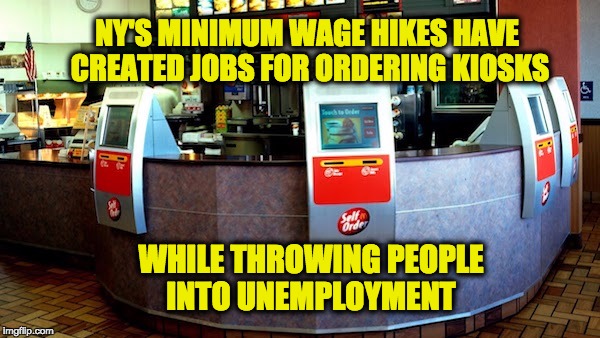 Note: While this report is about NY State, the effect of the increases in minimum wage are being felt in all states who have proceeded with this liberal policy.  Those effects generally include prices rising,  businesses closing, and too many of the people who the increase were trying to help losing their jobs.

Beginning on the last day of 2015, NY State began to slowly raise the minimum wage with the intention of bringing it to $15/hour by 2019. The NY minimum wage hikes are proving to be particularly damaging to the restaurant industry where the minimum wage increases have been higher other industries.

And on Dec. 31, the minimum wage for fast food employees rose as high as $12 in New York City,… Meanwhile, the statewide minimum wage rose to between $9.70 and $11 an hour for non-fast food, non-tipped employees.

As expected those increases are already having a sour effect on the restaurant Industry:

The Empire State lost 1,000 restaurants last year and the number of jobs as cooks, servers and dishwashers grew by an anemic 1.4 percent. That’s a far cry from the 4.4 percent annual growth the state’s eateries enjoyed from 2010 to 2015, according to the Employment Policies Institute, a nonprofit research group.

A thousand restaurants, the usual result of one of liberal NY Gov. Cuomo’s programs. Cuomo is pushing hard to implement every job-killing progressive program possible, he’s already pushed through oppressive gun laws, banned fracking which would add jobs and income to the state, and made sure the state would attract  criminally trespassing aliens.  The guy wants to be the 2020 Democratic Party nominee.

In New York City, where the Restaurant business is a big part of the economy the minimum wage rise is hurting employment.  At 3.4% 2016 job growth in NYC fast food restaurants is less than half the 7% average growth between 2010 and 2015, Its dropping even faster in 2017 growth through May is only 2%.

“This is a drop-off in restaurant growth that didn’t even show up during the great recession,” said Michael Saltsman, managing director of the Employment Policies Institute. “It’s compelling evidence that something big is going on.”

“It’s a miserable business at the moment,” said Andrew Schnipper, who owns five burger joints in Manhattan called Schnipper’s Quality Kitchen. “Most restaurateurs are far less profitable than they were a year ago.”

Restaurant employment across the country has been slowing down this year, but not by the same steep declines as in New York, say experts.

“It’s not unusual for growth like that to be sustained forever,” said James Parrott, an expert on city and state economics, who recently left the Fiscal Policy Institute. “Restaurant employment [in New York] overall is still increasing and average wages grew about 6 percent in 2016.”

But at what cost, ask some restaurateurs.

Schnipper’s, for example, has 10 percent fewer employees than it did a year ago and many of its current workers have reduced hours. The chain raised its menu prices by up to 4 percent last year and is planning another hike this summer and another one in January when the minimum wage in the city rises to $13. Meanwhile, sales have slipped this year.

As for the fast food industry the are beginning to automate their restaurants, which will end up throwing more people out of work. And as the full-service restaurants which are already working with smaller staffs, begin to raise their prices, customers will begin to stop coming, leading more closures and unemployment. While the $15 minimum wage is understandably appealing to restaurant workers, it is beginning to force some of those workers to lose their jobs. This will accelerate as Cuomo’s wage increase continues grow toward their 2019 target. In two years as more of the restaurant employees find themselves looking for a job, I wonder how many of them will say they would prefer their old jobs at a lower wage, than unemployment.