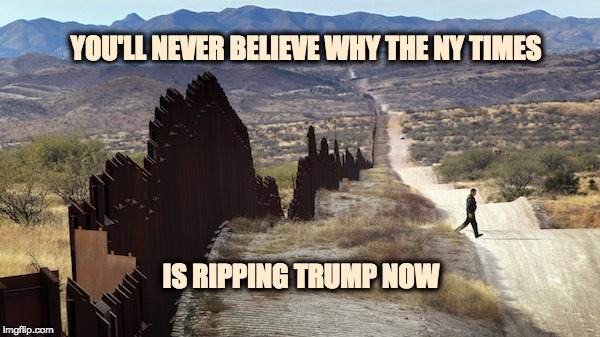 Most of the people who will read this post will be happy that illegal immigrants are staying home….unless of course they are on the left. This latest NY Times hit piece is an indication of how utterly distorted the Left’s worldview has become.

An article appearing in today’s New York Times has emblazoned across its top a photograph of a forlorn-looking man, sitting on the edge of a bed, his eyes downcast. Standing across the room from him is a young girl who looks sympathetically at the man — her father — as if to say, “It’s OK, Papa, maybe next year.”

The photo, commissioned by the Times, might have been meant to accompany a story about a child being denied a life-saving operation or something equally heart-rending. But it wasn’t. Here are the first few paragraphs of the article it does accompany:

His bags were packed, and the smuggler was ready. If all went well, Eswin Josué Fuentes figured he and his 10-year-old daughter would slip into the United States within days.

Then, the night before he planned to leave, he had a phone conversation with a Honduran friend living illegally in New York. Under President Trump, the friend warned, the United States was no longer a place for undocumented migrants.

Shaken, Mr. Fuentes abruptly ditched his plans in May and decided to stay here in Honduras, despite its unrelenting violence and poverty. He even passed up the $12,000 in smuggler fees that his sister in the United States had lined up for the journey.

“I got scared of what’s happening there,” Mr. Fuentes said.

While some of Mr. Trump’s most ambitious plans to tighten the border are still a long way off, particularly his campaign pledge to build a massive wall, his hard-line approach to immigration already seems to have led to sharp declines in the flow of migrants from Central America bound for the United States.

From February through May, the number of undocumented immigrants stopped or caught along the southwest border of the United States fell 60 percent from the same period last year, according to United States Customs and Border Protection — evidence that far fewer migrants are heading north, officials on both sides of the border say.

Gee It sounds like a good thing. But the clear message from the liberal media is that protecting our borders is somehow heartless — that Donald Trump’s so-far successful plan for staunching the flow of illegal immigrants into the nation is an act of aggression.

How did we reach this point? As recently as July 4 of 2016 — almost a year ago to the day — as reliably liberal a news outlet as PBS lamented that Barack Obama — champion of the Left — had failed in his efforts to reform immigration and curb the hordes of people sneaking across the border:

When his presidency ends in January, Obama will leave behind an outdated and overwhelmed system, with some 11 million people living in the U.S. illegally.

The missed goal is part of a legacy that included a sometimes contradictory mix of policies — some aimed at bringing immigrants “out of the shadows,” others at removing them from the U.S.

How did we as a nation go from viewing illegal immigrants’ entry into the nation as a problem to seeing it as a quasi-humanitarian initiative to be encouraged? It’s called progressivism.