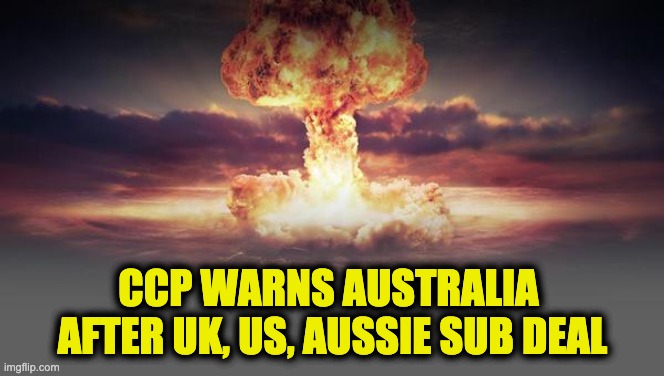 France may be upset at being left out of the cold by AUKUS, but China is absolutely livid.  nuke Australia

The submarine deal between the UK, Australia, and the USA exploits a fundamental weakness in China’s navy — the war below the waterline. Biden announced the agreement with the leader of the United Kingdom and good ole what’s his name the Prime Minister of Australia whose name Biden forgot on Wednesday.

It has kicked up a hornet’s nest with the Chinese communists, and they are spitting threats. Again.

The US, UK and Australia have announced a new alliance named “AUKUS” to target China, and they even made a deal to provide nuclear submarines to Australia. Chinese military experts warned that such a move will potentially make Australia a target of a nuclear strike if a nuclear war breaks out even when Washington said it won’t arm Canberra with nuclear weapons, because it’s easy for the US to equip Australia with nuclear weapons and submarine-launched ballistic missiles when Australia has the submarines.

…Li Haidong, a professor at the Institute of International Relations of China Foreign Affairs University, told the Global Times on Thursday that AUKUS is at the core of the US alliance system to contain China with extreme hostility, and it should not be underestimated. If Donald Trump or a Trump-like president returns to the White House one day, this alliance could bring unpredictable and catastrophic consequences.

“The US is using the same approach employed to contain Russia in Europe after the Cold War to contain China in the Asia-Pacific region. Washington is building a NATO-like alliance in the region, with AUKUS at the core, and the US-Japan and US-South Korea alliances surrounding it, and the Quad at the outermost level, because India, not an US ally, can’t be trusted by the US,” Li said.

They try to make the West out to be the aggressors here when China has been openly playing to make moves against their neighbors. Xi made explicit threats against Taiwan in his 100th anniversary of Communism speech — the one he insists Chinese Christian leaders teach their congregations… ‘or else.’

We’re supposed to pretend as though China didn’t move to seize Hong Kong while the rest of the world was distracted by the Pandemic? Xi’s Sneeze proved a very convenient distraction for them, wasn’t it? Never let a crisis go to waste, right? They have also made nuclear threats against Japan, should Japan be ‘foolish enough to act in their own self-defense.

They’re rattled. They know a weakness of theirs is being exploited.

With China’s economy resting on a house of cards and a massive demographic bomb ticking more loudly with every passing year, China’s apparent strength is built on a foundation of sand, and they know it.

Trump showed the world that it’s possible to stand up to China; all it takes is a spine and some principles—Biden has neither.