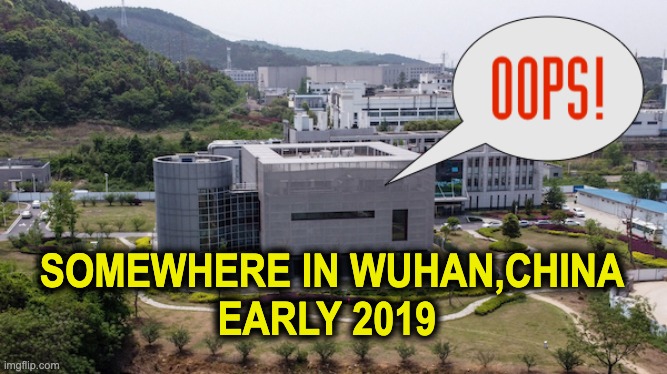 Matthew Pottinger, the current Deputy National Security Advisor, is saying that it is the most “credible” theory is that the virus escaped from the Wuhan Institute of Virology. Who could’ve predicted that? Wuhan lab

Well, in April 2020, several right-wing media outlets called it, and so did a whole bunch of conservatives on Twitter. Just not the Media. Fox News, the Epoch Times, and ClashDaily all had articles citing everything from examinations of the strain of SarsCOV-2 to Five Eyes intelligence reports suggesting that the virus came from the lab in Wuhan, China.

Welcome to the club, late-comers!

It would’ve been nice if there was a bit of a quicker reporting on this. Perhaps when Five Eyes suggested that the virus began in the lab?

But hey, perhaps we’re asking too much of the agenda-driven Media to follow leads and report facts promptly. After all, we saw how the Media buried the story about Hunter Biden’s Laptop From Hell until after the election, right?

Deputy DNS Pottinger is a well-respected member of the Trump administration.

“Mr. Pottinger, who speaks fluent Mandarin, previously worked as a journalist for Reuters and The Wall Street Journal, including seven years as its China correspondent,” notes the Daily Mail. In 2005, Pottinger became a Marine and worked as a military intelligence officer. In 2017, he was asked to join the US National Security Council, later becoming the Asia director before assuming his current role. The article adds, “His older brother, Paul, is a virologist at the University of Washington.”

Pottinger said that Chinese leaders are finally admitting that the early claim that the virus originated in a wet market a few miles from the lab in Wuhan was false.

Mr Pottinger said that the latest intelligence points to the virus leaking from the top-secret Wuhan Institute of Virology, 11 miles from the market, saying: ‘There is a growing body of evidence that the lab is likely the most credible source of the virus.’

He claimed the pathogen may have escaped through a ‘leak or an accident’, adding: ‘Even establishment figures in Beijing have openly dismissed the wet market story.’

The comments, which were made during a Zoom conference with MPs on China last week, come as a team of experts from the World Health Organisation prepare to fly to Wuhan to investigate how the pandemic began.

Critics fear the probe will be a whitewash given China’s influence on the WHO.

Deputy DNS Pottinger made the comments during a virtual conference with politicians from the United Kingdom.

Former Tory leader, Iain Duncan Smith, said that he heard that a whistleblower from the Wuhan Lab has come forward to U.S. authorities, which is strengthening the position that the origin of the virus was indeed the lab and not from the wet market.

‘I was told the US have an ex-scientist from the laboratory in America at the moment,’ he said. ‘That was what I heard a few weeks ago.

‘I was led to believe this is how they have been able to stiffen up their position on how this outbreak originated.’

He added that Beijing’s refusal to allow journalists to visit the laboratory only served to increase suspicion that it was ‘ground zero’ for the pandemic.
Source: Daily Mail

The Sunday Times reported, “Late last year, foreign journalists were barred from visiting an abandoned copper mine in the southwest of the country, where the closest known relative of Sars-Cov-2 was discovered in 2013 by Chinese virologists and taken back to the Wuhan laboratory. A bat research team had samples taken on a recent visit to the mine confiscated.”

In 2013, Wuhan virologist Dr. Shi Zhengli, known as “batwoman” for her research in coronaviruses in bats, discovered RaTG13 in a mine after six workers died from an unknown illness in 2012 and brought the samples to the lab in Wuhan.

The viral sequence in SARS-CoV-2 is very similar to RaTG13. Strangely, this similarity hadn’t been thoroughly examined by scientists or reported on by the media early on in the pandemic.

The world needs to know how this virus became a pandemic. We really needed to know about a year ago, but those of us wondering if it had escaped from the lab in Wuhan were dismissed as “xenophobic conspiracy theorists.”