The Democrat Party Has A New 2018 Message 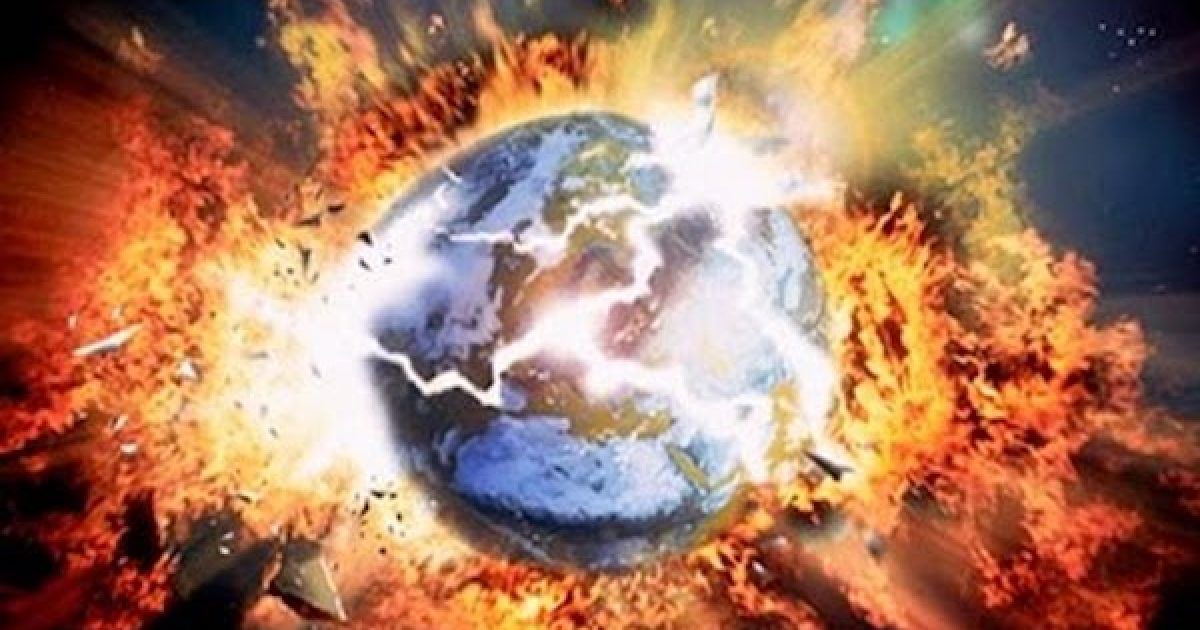 Many pundits have wondered when will the Democrats finally come up with a unified message for the American voters. Truth be told they have had one ever since President Trump took office, namely, ” OMG It’s The End Of The World, Millions Will Die!”

With almost every major (and even a few minor) pieces of legislation (or judicial nominee) that the GOP or President Trump proposes the Democrats respond with… “but Millions will Die” trying to convince America that trump’s policies are going to lead to the end the world. Besides being false upon hearing these claims over and over it makes one wonder if they should pay their bills. After all, if the world is going to end why bother?

Let’s do some recapping, shall we?

Liberals argued that if we pulled out of the Paris Climate Change Accords that President Obama illegally (entering into a treat without the consent of the legislature is unconstitutional and non-binding) entered us into, that millions of people would die.

If Trump pulls the US out of the #ParisAgreement he will be committing a traitorous act of war against the American people. My statement: pic.twitter.com/Qjgxm4fELp

An editor from Vice News claimed all of our children would die because we weren’t in the Paris Accords anymore. (She later deleted the tweet.)

your kids are gonna die from climate change after we pull out of the Paris climate deal too!! pic.twitter.com/gTHj11PNbg

And Finally here’s Scientific America claiming that our stepping out of the accords would turn the world into a desolate wasteland.

What will the world look like if the U.S. bails on the Paris climate deal? https://t.co/ywfDw3PmEg pic.twitter.com/ARE4u7zCmm

Former Clinton advisor and leftwing economist Larry Summers poo-pooed President Trump’s tax plan, saying it would kill millions of people. Instead of death and destruction, the President’s tax plan has put more money back into people’s pockets, help reinvigorate the economy, led to an explosion in jobs, and the first real wage increases we’ve seen in a decade. If that’s mayhem… I’m not sure what these liberals think the word means.

Here are a few other lefties promising doom and gloom.

Nancy Pelosi: “[Tax reform] does violence to the vision of our Founders.”

This is categorically false.

The Founding Fathers fought a revolution over taxes, despite paying as little as 1-2% of their income in taxes.https://t.co/Lgt7hmjQSG pic.twitter.com/FWmZyrPP72

And Nancy again, this time saying that the tax bill would be ‘the end of the world.’ Seriously.

“No, it is the end of the world. The debate on health care is life, death. This is Armageddon. This is a very big deal, because you know why? There’s really a very hard way to come back from this. They take us further, more deeply into debt. What can you do but raise taxes? They throw a few crumbs to the middle class. What they give with one hand they take away in bounty with the other.”

By the way, the “end of the world” stuff wasn’t the only lie the Democrats were telling. Senator Kamala Harris (D-CA) tried to argue that some middle-class Americans would actually get tax INCREASES. Boy, was she wrong.

A few weeks before the vote, rising Democratic star and many on the left’s favored 2020 presidential candidate Sen. Kamala Harris spread the false claim that all middle class families making less than $86,000 a year would get a tax increase. The claim ended up getting slammed even by the left-leaning Washington Post, who gave Harris and the Democrats who produced the fake talking point Four Pinocchios.

When the Republicans tried to repeal Obamacare, the Democrats immediately claimed that it would lead to hell on earth in the USA. Socialist Bernie Sanders (I-VT) (recently, the runner-up Presidential candidate from the Democrat Party) argued that doing so would be worse than having another 9/11 every year.

“Now obviously nobody can predict exactly how many people will die if they lose their coverage. Nobody can make that prediction. But what experts at the Harvard School of Public Health estimate, is that if 23 million Americans were to be thrown off the insurance they currently have, which is what the House bill would do, up to, up to 28,000 Americans every single year could die. That is nine times more than the tragic losses we suffered on 9/11, every single year.”

And more from Bernie, via the Daily Wire:

Socialist loonbag Senator Bernie Sanders (I-VT) raged, “If this legislation is passed and millions of people are thrown off health insurance … thousands of Americans will die.” He continued, “I think that legislation is disgusting. It is immoral. It must be defeated and I hope there is enough sense amongst some of the Republicans.”

Thankfully, even the liberal Washington Post couldn’t stomach Bernie’s lies, giving him 4 Pinocchio’s for his slander against the GOP.

But as Forbes explained, the idea that repealing Obamacare would “kill” anyone was patently absurd. The vast majority of those who would lose their Obamacare insurance are actually also enrolled in Medicaid, meaning that almost no one would involuntarily “lose” their healthcare coverage because of Obamacare reform.

Net Neutrality was only a thing for about two years. From June 2016 to June 2018 the Obama-era FCC attempted to give the government control of the Internet, ostensibly to ‘keep the internet free.’ If you give it any thought, the idea is nonsense. How could giving government control over something make it more “free.” That’s illogical. Regulating things, by definition, makes them less “free.”

So when President Trump was elected, and the FCC leadership changed their first major decision was to end net neutrality and return the Internet to its previous state of absolute freedom. This move sent the left into an apoplectic fit of nonsensical rage. (Here are 7 reasons that net neutrality is idiotic.) They began arguing that by ending net neutrality Republicans were ushering in the destruction a free and fair Internet! The web as we knew it would never be the same… oddly, none of the doom and gloom has come to pass. Even more interesting, all of the worries that net neutrality supporters have long worried about… have never been a problem. Ever.

But still, the Democrats fear-mongered.

If #NetNeutrality is eliminated, the Internet may start to resemble a toll road, with the highest bidders cruising along private “fast lanes” while the rest of us inch along a single, traffic-choked public lane.

Ben Shapiro explains why most of the left’s outrage is totally unreasonable.

Here’s what’s not reasonable: the suggestion that your internet use is likely to change radically from what it was in 2015, before net neutrality went into effect. Here’s what else isn’t reasonable: people of the Left who think that Facebook, YouTube, and Twitter operate fine in the free market, and that consumers don’t have to worry about discrimination thanks to open competition, but that the same doesn’t apply to ISPs.

In any case, the doom and gloom are wildly overstated. If we really wanted to open up the internet, we’d truly need to focus not on national policy and major corporations, but on local regulatory regimes that restrict the building of new broadband networks.

Without net neutrality, the Internet is genuinely free. If corporations begin monopolizing our access to the Internet, we already have recourse through the government’s power to break up monopolies. The left’s answer to their fears of tech industry control of the internet, by handing control to the government, is actually worse than the problem itself.

I’m not even sure how Democrats are connecting their dots here, but I’ll let you try to figure that out for yourself.

Let your Senators know: there is nothing moderate about stripping rights away from women.

We must do everything we can to #DefendRoe and #SaveSCOTUS.

And finally, Kavanaugh is a threat to MILLIONS because… birth control?:

Forget abortion or same-sex marriage—contraception could be banned under Justice Kavanaugh https://t.co/W8qg7txtFQ

David French at the National Review was floored by these ridiculous and inane concerns from the left:

Keep in mind, this is for a nominee so mainstream — so much a part of the conventional Republican establishment — that it’s easy to imagine a President Rubio or a President Jeb Bush putting him on the Supreme Court. He’s not remotely radical. His jurisprudence is squarely within the originalist tradition, and the main critique endured during the run-up to his nomination (including from me) was that he was too safe, that the Court needed a bolder choice.

Judge Brett Kavanaugh was the safest, least bold, choice that President Trump could have made. If he, a mainstream judge with a long history of mainstream legal opinions (He’s so milquetoast that Current Justice, Elena Kagan, hired him to work for her at Harvard Law!), is too controversial to be easily confirmed… then the Democrats have lost all perspective on the Court and on American jurisprudence.

But Kavanaugh isn’t the story here. The point to all of this is that over the last year and a half, Democrats have repeatedly claimed that GOP-led issues would lead to death, destruction, and calamity (even Armageddon). Yet, none of that has come to pass

Ordinary Americans are beginning to wonder just how insane the fear-mongering from the left is going to get?

Are these the same millions whose lives were threatened by pulling out of Paris Accord, then again by Trump’s Tax Reform, and now once more? I am beginning to think you guys have a horde of crisis actors whose sole job is to have their lives threatened by Trump constantly.

6. The Pressure on Kim Jung Un and North Korea

Remember “rocket man?” Remember when President Trump threatened Kim Jung Un with all the “fire and fury” of America? That pressure type of pressure led to the Trump/Kim summit which so far hasn’t led to an agreement but has eased tensions and stopped Kim’s nuclear and ballistic missile tests.

But According to Democrats and their pawns in the MSM that kind of talk was going to cause a nuclear war. Politico, for example, Politico reported  “one former senior Defense Department official put it to me the other day, “How do we do ‘fire and fury’ without buying a worldwide conflagration?”

Chuck Schumer called Trump’s comments “reckless” and added, “We need to be firm and deliberate with North Korea, but reckless rhetoric is not a strategy to keep America safe,”

North Korean Leader Kim Jong Un just stated that the “Nuclear Button is on his desk at all times.” Will someone from his depleted and food starved regime please inform him that I too have a Nuclear Button, but it is a much bigger & more powerful one than his, and my Button works!

That comment caused minority leader Chuck Schumer (D-NY) put his glasses down to the tip of his nose and state:

WOW did you know that? Then why did our NATO Allies work so hard to please the American President at the 2018 summit?

If you love our country, help me put this lunacy in check. Tell @realDonaldTrump this is not normal behavior. Any @HouseGOP members want to make sure Congress has some say before he pushes that button? https://t.co/qI7pVc3I5I

Despite the opinions based on the Democratic Party strategy like those above, the world isn’t ending. What that means is that the Democrats are recklessly trying to divide and fear monger the public. It also indicates that we should all go ahead and pay our bills.

The End Of The World

The End Of The World