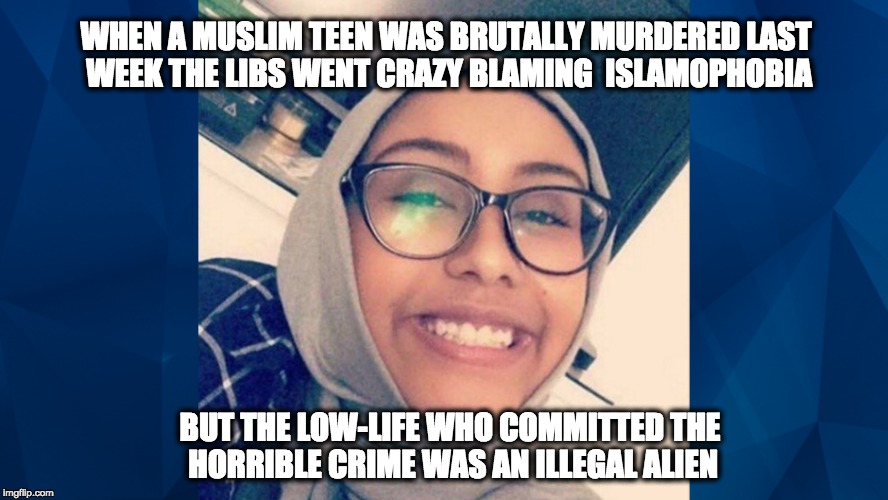 Muslim activists, liberal agitators, and their partners in the major media outlets all argued that this was a disturbing example of the rampant Islamophobia that they can’t seem to find many other examples of.

Left wing news outfit Fusion breathlessly reported that Hassanen had been murdered on her way out of her mosque. The implication being that this was obviously Islamophobia at work…

Nabra Hassanen was murdered on her way home from a mosque in Virginia following overnight Ramadan prayers.

The terrorist supporting anti-Semitic activist Linda Sarsour implied to her followers that Muslim people are not safe anywhere in America:

Trump had chance 2 save Nabra Hassanen, but instead he encouraged hate against Muslims & now we have a girl beaten to death 4 being Muslim! https://t.co/ZfysYXZYlu

just reading up on the tragic death Nabra Hassanen. totally heartbroken. we MUST stand up against Islamophobia

Little did he know that it wasn’t islamophobia that killed Nabra Hassanen… it was illegal immigration.

A 22-year-old man accused of killing a 17-year-old Muslim girl in Virginia on Sunday morning is an illegal immigrant from El Salvador, a spokesperson for U.S. Immigration and Customs Enforcement (ICE) tells The Daily Caller.

The suspect, Darwin A. Martinez Torres, was arrested on Sunday in the death of Nabra Hassanen, a high school student from Reston, Va. Police say he beat Hassanen with a metal baseball bat in what is being described as a road rage incident…

Local police and ICE were slow in confirming whether Torres is in the U.S. illegally. But in a statement issued Monday afternoon, an ICE spokesperson confirmed that the agency has lodged a detainer request against the El Salvadoran national, indicating that he is an illegal alien.

“On June 19, ICE lodged a detainer on Darwin Martinez Torres, a citizen and national of El Salvador, with the Adult Detention Center in Fairfax, Virginia. ICE lodges detainers on aliens who have been arrested on local criminal charges when the agency has probable cause to believe an alien is removable from the United States. Mr. Martinez Torres has no prior encounters with ICE,” ICE spokesperson Carissa Cutrell told TheDC.

Cutrell specifically confirmed that Torres is an illegal alien.

Nabra Hassanen’s death is a tragedy and the man who killed her should be punished to the fullest extent of the law, but this is yet another example of liberals rushing to use every opportunity possible to politicize tragedy. If you do a little research on social media there are many examples of “Trump blaming” from the Left, but the reality is that if anyone (other than Torres) is to blame for Hassanen’s death… it’s liberals. Liberals have fought against deporting illegal immigrants. Liberals have fought against punishing illegal criminals for the laws they’ve broken. It’s been liberals who have fought the rule of law every step of the way, and it’s liberals who are most to blame (other than the lawbreakers themselves) for the crimes committed by illegal immigrants.

CBS had more on the story this morning..apparently it was road rage by an illegal immigrant.