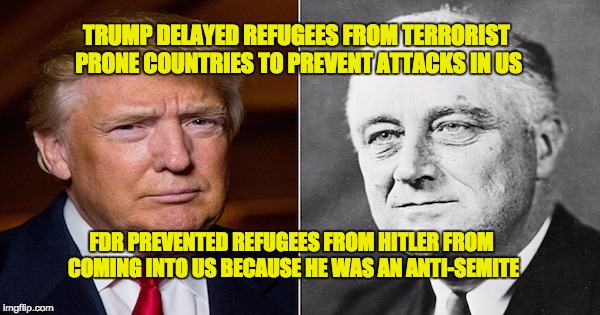 Liberals of course are going crazy. They say that Trump created this order because he is Islamophobic. They’ve even come up with a ridiculous comparison, “Anne Frank was a refugee also.” Indeed she was, but the reason for Trump’s action was totally different from the reason Anne Frank and many like her were prevented from coming to the US.

In June 2016 then CIA Director Brennan said during congressional hearings that one of the ways terrorists infiltrate western nations is by embedding themselves within groups of refugees.

Brennan explained that ISIL has been recruiting and training westerners to infiltrate their countries of birth and commit terrorist acts. Interestingly, he identifies refugee flows as one of the ways terrorists can infiltrate. That seems to suggest that the United States needs to be very careful who it lets into the country, “which hasn’t been a priority for this administration, but there seems to be one presidential candidate who wants to put a temporary stop to immigration from certain countries that house I mean international terrorists.”

And the group is probably exploring a variety of means for infiltrating operatives into the West, including refugee flows, smuggling routes, and legitimate methods of travel. Further, as we have seen in Orlando, San Bernardino, and elsewhere, ISIL is attempting to inspire attacks by sympathizers who have no direct links to the group. Last month, for example, a senior ISIL figure publicly urged the group’s followers to conduct attacks in their home countries if they were unable to travel to Syria and Iraq.

President Trump’s action delays acceptance of refugees until the DHS can figure out how to ensure they’ve kept the embedded terrorists from hiding within the crowds of legitimate refugees. His motivation is to prevent terrorist attacks in the United States.

In the case of the Holocaust, the Nazi’s weren’t embedding themselves with the Jewish refugees. It wasn’t even suspected. The Jewish refugees were kept out because FDR was a bigot, his hatred of Jews caused thousands to be added to the ranks of Hitler’s victims.

Some point to the fact FDR didn’t bomb and destroy the train tracks that were shipping Jews to the concentration camps. Others say that bombing wouldn’t have prevented anything. The real question needing to be explored is why didn’t FDR allow more Jews into the country? And why didn’t he pressure Britain to allow Jews to move from Nazi controlled areas into what was then called Palestine?

In the book “FDR and the Holocaust: A Breach of Faith,” historian Rafael Medoff suggests that Roosevelt failed to take relatively simple measures that would have saved significant numbers of Jews during the Holocaust, because his vision for America was one that had a small number of Jews. In other words, FDR doomed many Jews to suffer not because he wanted them to die, but because he didn’t want more Jews living in his neighborhood.

In a piece for the Brandeis Center, Medoff shared some of the hateful/public anti-Semitic statements Roosevelt made when he let his guard down:

In 1936, he characterized a tax maneuver by the publisher of the New York Times as “a dirty Jewish trick.” In 1938, FDR privately suggested to Rabbi Stephen S. Wise, one of the era’s most prominent American Jewish leaders, that Jews in Poland were dominating the economy and were to blame for provoking Antisemitism there.  In 1939, Roosevelt expressed (to a U.S. senator) his pride that “there is no Jewish blood in our veins.”  In 1940, he dismissed pleas for Jewish refugees as “Jewish wailing” and “sob stuff.” In 1941, President Roosevelt remarked at a cabinet meeting that there were too many Jews among federal employees in Oregon.

Perhaps his distaste for Jews was the reason that, while there were many actions FDR could have taken to stop or slow down the Holocaust, he didn’t. “He could have quietly permitted the immigration quotas to be filled to their legal limit — that alone would have saved 190,000 lives,” Medoff said.

On Roosevelt’s most blatant acts of bigotry involved the St. Louis whose story was  told by Pamela Adams at Constitution.com

The reason for the delay, announced Friday, was to protect American lives. The Holocaust refugees were kept out because of the bigotry of liberal hero FDR that caused approximately 200K extra Jews die in the Holocaust, because he didn’t want more Jews living in America.

Bottom line: it is pure nonsense, an intellectually dishonest — or at least ignorant — argument to compare the two groups of refugees or the belief systems of the two presidents.