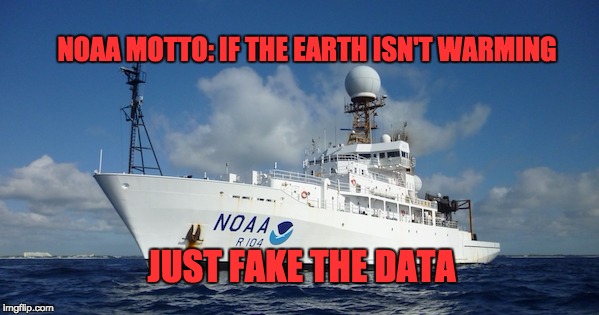 Just before the Paris climate conference at the end of 2015, the National Oceanic and Atmospheric Administration (NOAA) released a study saying that the pause in global warming that started in 2008 never happened, and world temperatures were rising faster than originally thought. This study dominated the headlines when it was released, the global warming enthusiasts were all screaming about how right they were. But they were wrong! The NOAA numbers were bogus–hyped up for the Paris conference.

The UK Daily Mail was contacted by a whistle-blower who proved beyond a shadow of a doubt that the study was based on bad data.

…the whistleblower, Dr John Bates, a top NOAA scientist with an impeccable reputation, has shown The Mail on Sunday irrefutable evidence that the paper was based on misleading, ‘unverified’ data.

When the paper was to be released Bates vehemently objected to the data used, however his superiors overruled him. The Doctor called it “blatant attempt to intensify the impact’ of what became known as the Pausebuster paper.”

Apparently the NOAA wanted to create a paper that “destroyed” the idea of a global warming pause.

Some scientists argued that the existence of the pause meant the world’s climate is less sensitive to greenhouse gases than previously thought, so that future warming would be slower. One of them, Professor Judith Curry, then head of climate science at the Georgia Institute of Technology, said it suggested that computer models used to project future warming were ‘running too hot’.

Assumingely that was the motivation for using bogus numbers to create the “Pausebuster” study.

In an exclusive interview, Dr Bates accused the lead author of the paper, Thomas Karl, who was until last year director of the NOAA section that produces climate data – the National Centers for Environmental Information (NCEI) – of ‘insisting on decisions and scientific choices that maximised warming and minimised documentation… in an effort to discredit the notion of a global warming pause, rushed so that he could time publication to influence national and international deliberations on climate policy’. Dr Bates was one of two Principal Scientists at NCEI, based in Asheville, North Carolina.

The NOAA’s 2015 paper was based on two sets of temperature data, the land surface and the sea surface.  Both sets of data used for the study were garbage.

The NOAA has already decided the sea data will have to be tossed out and revised, and it’s only a year and a half after the study was put together.  Apparently the data used “unreliable methods which overstated the speed of warming.”

Average sea surface temperatures are [usually] calculated using data from weather buoys. But NOAA ‘adjusted’ these figures upwards to fit with data taken from ships – which is notoriously unreliable. This exaggerated the warming rate, allowing NOAA to claim in the paper dubbed the ‘Pausebuster’ that there was no ‘pause’

Revised data will show both lower temperatures and a slower rate in the recent warming trend.”

It gets worse.  There has never been a final approved, verified version of the data created. AND because the computer that processed the software suffered a complete failure, much of the data was gone. In other words the very basic requirement of a legitimate scientific study, that it can be replicated by other scientists, is impossible.

In the weeks after the Pausebuster paper was published, Dr Bates conducted a one-man investigation into this. His findings were extraordinary. Not only had Mr Karl and his colleagues failed to follow any of the formal procedures required to approve and archive their data, they had used a ‘highly experimental early run’ of a programme that tried to combine two previously separate sets of records.

This had undergone the critical process known as ‘pairwise homogeneity adjustment’, a method of spotting ‘rogue’ readings from individual weather stations by comparing them with others nearby.

However, this process requires extensive, careful checking which was only just beginning, so that the data was not ready for operational use. Now, more than two years after the Pausebuster paper was submitted to Science, the new version of GHCN is still undergoing testing.

Think about that, they used software that still isn’t approved for use.

But none of the above stopped the study from being the talk of the Paris Climate Conference. The study’s lead author,Thomas Karl was a close contact with Obama’s chief science adviser, John Holdren, in other words the bogus study had a direct line to the White House.

Dr. Bates told the paper he decided to become a whistle blower after he saw reports in the media including the Washington Post and Forbes that scientists were worried the new Trump administration would toss or fail to maintain NOAA’s climate records.

Dr Bates said: ‘How ironic it is that there is now this idea that Trump is going to trash climate data, when key decisions were earlier taken by someone whose responsibility it was to maintain its integrity – and failed.’

The paper contacted Mr. Karl who denied he was rushing to get the NOAA study out before the Paris conference. However he did admit the data had not been archived when the paper was published. And when the final, approved and ‘operational ’version of the GHCN land data was released it would be ‘different’ from that used in the paper’.

But Mr. Karl shouldn’t feel bad, his fake study which eliminated the warming pause, is as legitimate as the study that proved 97% of Climate Scientists believe in the global warming hypothesis.

Last month when writing to launch his Ladybird book about climate change, Prince Charles stated boldly: ‘There isn’t a pause… it is hard to reject the facts on the basis of the evidence.’ Well Charlie, you used a bogus study, using bogus data. And its hard to reject that fact based on the evidence.  God gave two eyes, two very over-sized ears, and one mouth. Perhaps you should use your eyes and ears to check the information twice, before you use your mouth.