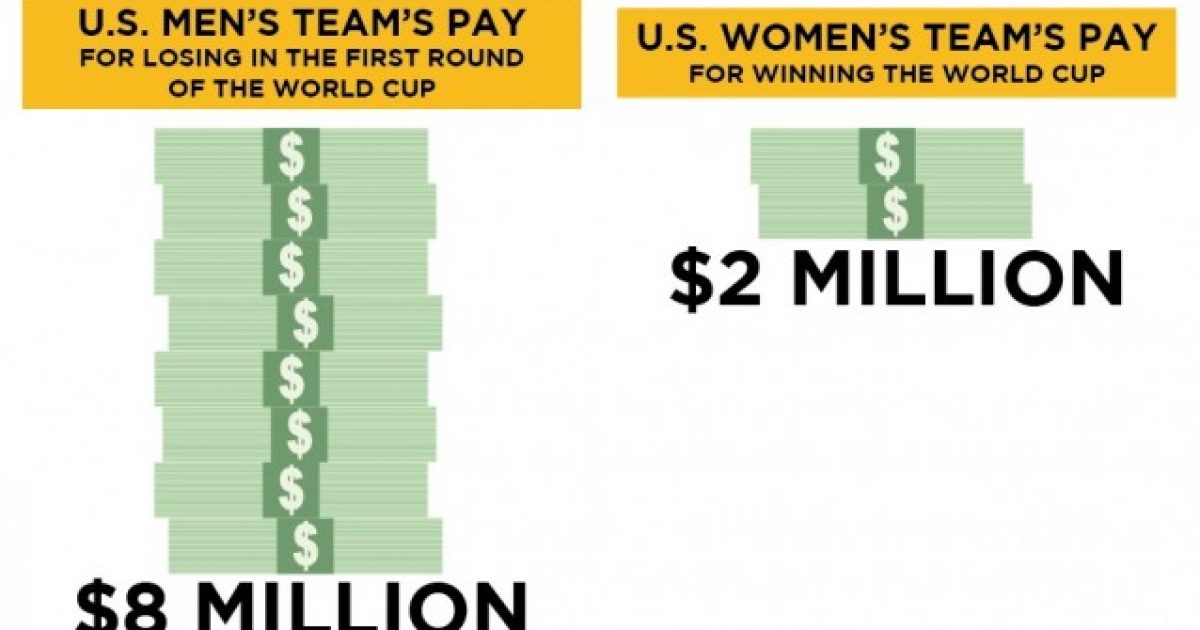 Now that the U.S. Women’s Soccer team has won the World Cup, the progressives are screaming that the winning women’s team received less money than the men’s team received not making it past the first round.  The chart above from a ThinkProgress  post complaining about the pay difference is correct. The chart is correct but the post is naive’ as is the post in CNN complaining about the pay for the winning women.

I know little about soccer and my interest in the sport is less than my knowledge. I do however know about sports marketing and sponsorships, and how that money affects what athletes get paid. So does, as it turns out the Washington Post:

For the U.S. national team’s stunning 5-2 win over Japan at the Women’s World Cup on Sunday, a rout that made the Americans the first team ever to win three world championships, soccer’s global governing body will award the team $2 million — about 5 percent of the $35 million FIFA gave to the German victors of last year’s World Cup.

And while viewers made the Sunday match by far the most-watched soccer game in American TV history, little of that excitement could be seen in the tourney’s marketing deals. Fox grabbed an estimated $17 million in ads from corporate sponsors of the elite women’s matches — a tiny fraction compared to the $529 million ESPN pocketed in sponsorship revenue from last year’s tournament in Brazil.

Yes Sunday’s game had incredible viewing levels but those levels were a surprise, nobody expected them. Which means advertisers underpaid for their advertising. Having had to negotiate with Fox TV ad sales in the past, I can assure you that this mistake will not happen again.

Here’s the truth, the only way for the women’s team to get as much money as the men’s team is for their entire tournament to get the same sponsorship dollars (TV, corporate, stadium, and team, etc.) than the men. While the women won, with the exception of the final game they did not draw the same audience as the men during the course of the tournament.

The basic rule is Audience+Interest=Sponsorship $$$ and Sponsorship $$$=Money For Team. Its really as simple as that. The women’s tournament will probably generate higher sponsorship dollars next time in anticipation of a higher audience and interest, but it still will not be at the same levels as the men until they can prove the high ratings of this past Sunday was more than a one-time occurance.

CNN and Thinkprogress naively believe its about gender discrimination, but its all about the consumer.  They should be urging people to tune into the next women’s tournament and to buy products that support the team. In the end it has nothing to do with the broadcaster that carries the game or FIFA, attracting more consumers is the ONLY way for the team to make more money.