No Way! Mitt Romney DID NOT Leave The Door Open To Running in 2015 (And Lloyd Did Not Get Mary) 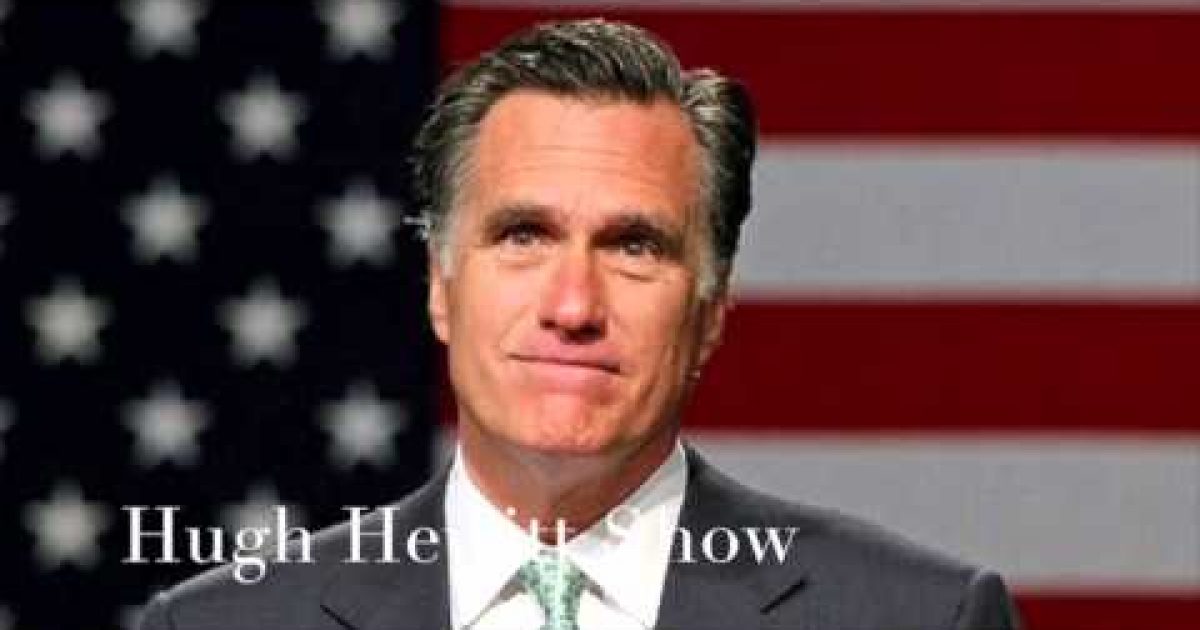 (Scene from the movie Dumb and Dumber)

Almost every news outlet that covered Tuesday’s Mitt Romney interview with Hugh Hewitt said the 2012 candidate left the door to running in 2016 slightly ajar. They got the story wrong. As a regular listener to the Hugh Hewitt show, I listened to the entire interview live. The truth is Mitt Romney said it over and over again: “I will not run in 2016.”

He said it before the four minute clip that was sent to the media:

He said it after the four minute clip sent to the media:

Romney: I want the country to win. I do not want to see Hillary Clinton as our next president. So I stepped aside so someone who has a better shot will be able to step forward.

During the entire interview a determined Hewitt kept finding different ways to ask the same question, in the end Romney stood his ground, saying, “I had the chance of running. I didn’t win. Someone else has a better chance than I do.”

Romney did say circumstances can change but after Hewitt’s relentless questioning, Romney did  quote Dumb and Dumber by offering the host his “one in a million” chance of running: if all the other candidates got together and said, “Hey, we’ve decided we can’t do it, you must do it.” In other words, he isn’t running. Note: At the end of Dumb and Dumber Lloyd does not get Mary

Read and listen to below the 4 minute segment sent to the media:

Hewitt: Now Governor Romney, because you were the governor of the Commonwealth, you know your revolutionary history. And so I want to throw a little Thomas Paine at you from December 23rd of 1776. They call it the darkest hour of the Revolution. It’s before Trenton and the Delaware crossing, after six months of misery and defeats. And Thomas Paine writes the famous opening lines of the crisis: “These are the times that try men’s souls. The summer soldier and the sunshine patriot will in this crisis shrink from the service of their country, but he that stands it now deserves the love and thanks of man and woman.” So here’s the question. If you personally believed, I mean, really, genuinely believed that you were the only candidate who could beat Hillary, and that belief was confirmed by your family and your friends and respected political advisors, would you not then feel obliged to run?

Romney: (laughing) Well, Hugh, the reason I came to the conclusion I did, which is this is not the right time for me to run, is because of my belief that someone else stands a better chance of winning than I do. Had that not been the case, had I believed I would actually be best positioned to beat Hillary Clinton, then I would be running. But I actually believe that someone new that is not defined, yet, someone who perhaps is from the next generation, will be able to catch fire, potentially, build a movement, and be able to beat Hillary Clinton. If I thought that weren’t the case, well, I would have been running. But I think we’ve got a number of very good people looking at this race. I’m expecting someone to be able to catch fire and get the job done.

Hewitt: Now I’m pressing, and I’m pressing an advantage of long acquaintance, and so forgive me for this, but that’s subject to change, right? People’s candidacies implode, circumstances change. People who organized campaigns approach you. And so I’m not asking you to, I wouldn’t presume to ask you to say “Yeah, I’m in the race.” But circumstances change. And if you thought that in fact it were not that way, that you thought you were the only one who could do this, you’d change your mind, wouldn’t you?

Romney: (laughing) I’m not going there, Hugh. I know you’re going to press, but you know, this is something we gave a lot of thought to when early on I decided we’re not going to be running this time. And again, we said look, I had the chance of running. I didn’t win. Someone else has a better chance than I do. And that’s what we believe, and that’s why I’m not running. And you know, circumstances can change, but I’m just not going to let my head go there. I remember that great line from Dumb and Dumber, where the…

Hewitt: So you’re telling me I have a chance?

Romney: There you go, you remember. You’re telling me I have a chance? That’s one of a million.

Hewitt: Hey, all, the takeaway is already circumstances can change. I know how we’re going to play this. But I hope it’s not the Harold Stassen nonsense, which overlooks the far more unlikely comebacks like Reagan’s and Nixon’s, and Dewey’s and Stevenson and William Jennings Bryant. In fact, not even Stassen became a joke until his ’64 run. His previous four runs were all very serious affairs. Here’s what your running mate said yesterday on this show.

Ryan: I would welcome it. I’ve told him that, I was with him last Thursday. I think he should run. I think people are getting to know who he really is. I think there’s buyer’s remorse, and I think he’d make an outstanding president. He says emphatically, though, that he won’t do it. You know, I just wish he would. I think he’d be a unifier. But I just, I’ll take Mitt at his word, and he’s pretty clear he’s not going to do it.

Hewitt: See, he’s not as abrasive as I am. And so you have been very clear you’re not doing it now. I just keep looking for that, I get asked everywhere I go because I wrote the book about you, have you heard if there’s any door open. And I said no, I haven’t. He always says no, no, no, but I’ve always also said that I thought if you thought you were the only guy who could win, you’d do it.

Romney: Well, you know, let’s say all the guys that were running all came together and said, “Hey, we’ve decided we can’t do it, you must do it.” That’s the one of the million we’re thinking about.