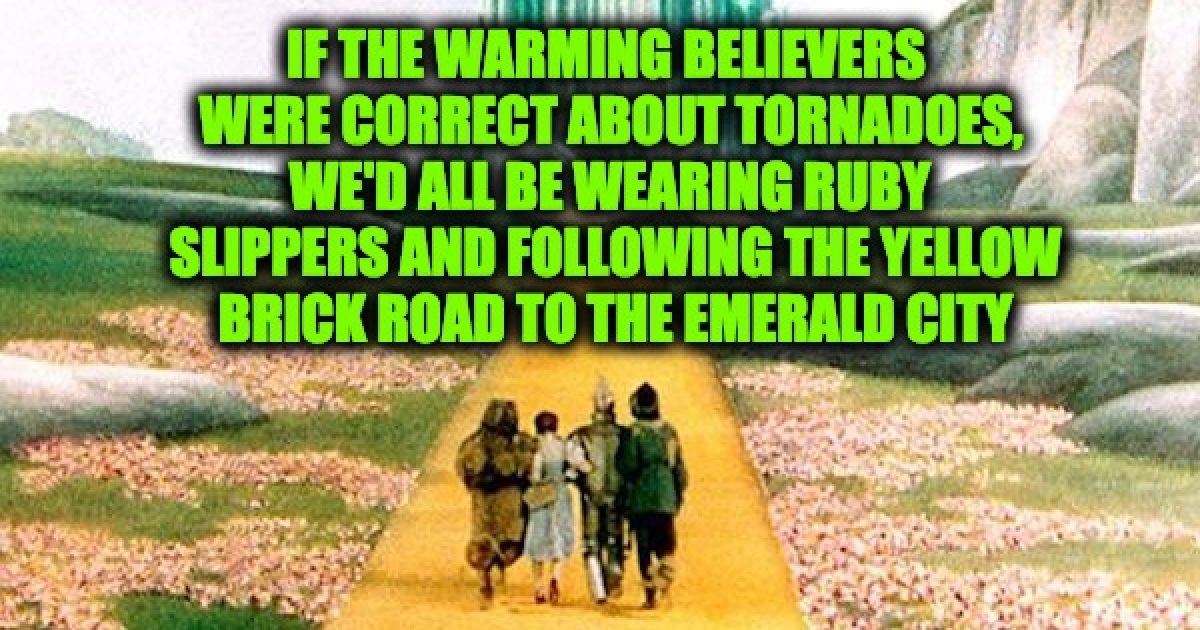 Global warming is very real and very terrifying. Tornados in November?! So scary.. Praying for everyone affected ???? pic.twitter.com/5g00RB9Is8

And the claims are still coming, seven weeks ago, on Nov. 8, 2018, WNEP Channel 16 in  Pennsylvania reported:

There were several tornadoes, including one with winds of up to 130 miles per hour which destroyed shopping complexes in Wilkes-Barre Township.

Meteorologists say more intense weather could be on the way.

Meteorologists say the time is now people and businesses need to start using cleaner energy, recycle, and watch what they consume, or our weather might get even worse.

But this is the first year since we started keeping records that we did not have any so-called killer tornadoes of EF4 or EF 5 force.

According to the Washington Post, though, this year has been very light on tornadoes:

It was a quiet year for tornadoes overall, with below normal numbers most months. Unless you’re a storm chaser, this is not bad news. The low tornado count is undoubtedly a big part of the reason the 10 tornado deaths in 2018 are also vying to be a record low.

This year will be the first year since official records started in 1950 that did not see any of the strongest tornadoes.

In fact, contrary to the claims of global warming religionists who insist that storms and tornadoes are getting worse because of climate change, the Post notes that tornadoes have been trending down in frequency and strength.

This year’s goose-egg may seem to fit a recent pattern.

In simple terms, there have been downtrends in violent tornado numbers both across the entire modern period, and when looking at just the period since Doppler radar was fully implemented across the country in the mid-1990s. A 15-year average as high as 13.7 in the mid-1970s will drop to 5.9 next year.

But it isn’t just the harshest of tornadoes. We have also seen fewer of the lower powered funnel clods:

Expanding to include all “intense” tornadoes, or those F/EF3+, this year’s 12 is also poised to set a record for the fewest. I wrote about this back in May, and 2018 has kept pace for record lows since then.

So what happened, Al Gore? Didn’t you say that all this would continue to get worse every year until the earth we are all living in Waterworld?

You gotta love these progressives they change their claims more often than I change my underwear as long as it brings about global redistribution of income. How long do you think it will be before the climate change fearmongers claim that climate change stops tornadoes. After-all when they realized the earth wasn’t warming, they change the name of their disaster from global warming–> climate change

And they used to say increased tornado activity was caused by global cooling. In a story about the coming ice age on June 24, 1974, Time magazine reported:

Scientists have found other indications of global cooling. For one thing there has been a noticeable expansion of the great belt of dry, high-altitude polar winds — the so-called circumpolar vortex—that sweep from west to east around the top and bottom of the world. Indeed it is the widening of this cap of cold air that is the immediate cause of Africa’s drought. By blocking moisture-bearing equatorial winds and preventing them from bringing rainfall to the parched sub-Sahara region, as well as other drought-ridden areas stretching all the way from Central America to the Middle East and India, the polar winds have in effect caused the Sahara and other deserts to reach farther to the south. Paradoxically, the same vortex has created quite different weather quirks in the U.S. and other temperate zones. As the winds swirl around the globe, their southerly portions undulate like the bottom of a skirt. Cold air is pulled down across the Western U.S. and warm air is swept up to the Northeast. The collision of air masses of widely differing temperatures and humidity can create violent storms—the Midwest’s recent rash of disastrous tornadoes, for example.

Almost a year later in April 1975, Newsweek wrote,  “the most devastating outbreak of tornadoes ever recorded,” killed “more than 300 people”, this according to the magazine was among “the ominous signs that the Earth’s weather patterns have begun to change dramatically.”

its getting cold by on Scribd

Here is the truth that nobody who believes in the climate change hypothesis will admit.  If climate change believers truly believe that tornadoes are tied a still warming earth, then we should all be wearing ruby slippers and following a yellow-brick-road to Emerald City.

But progressives conveniently switch from tornadoes being caused by cooling and/or warming.

And it doesn’t really matter what they blame it on because except for the recent drastic El Nino the earth’s temperature hasn’t really changed since Bubba Clinton was misusing an excellent Cuban cigar in the Oval Office.