No Hillary Clinton, Donald Trump Is NOT ISIS’ Best Recruiter 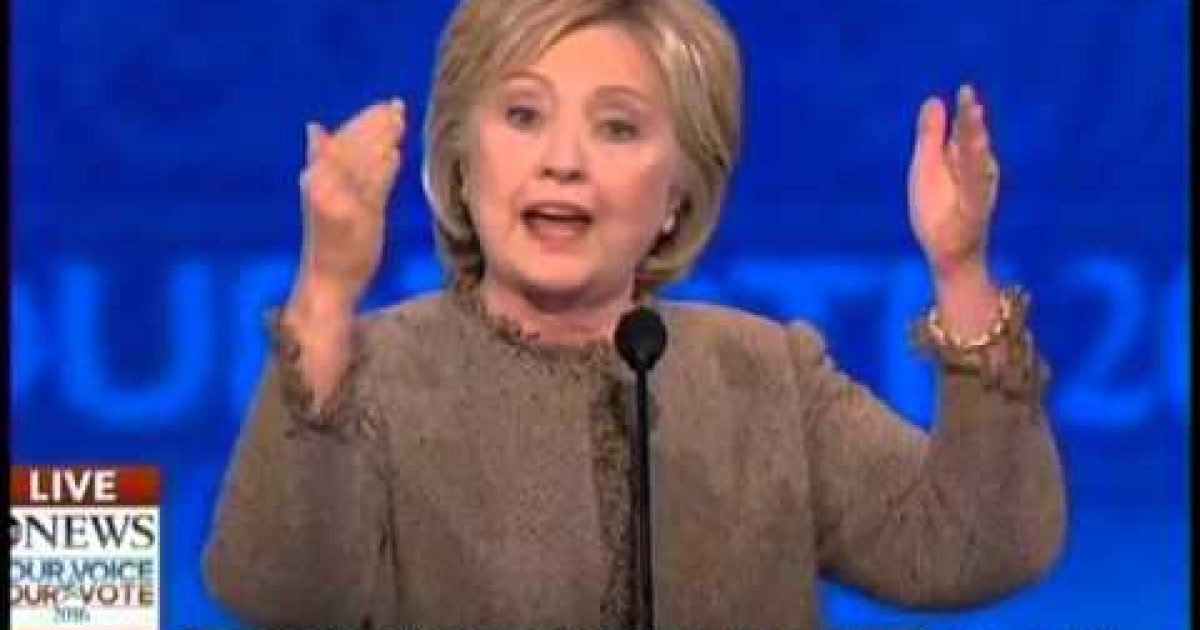 Regular readers of this site will know I thought that his Trump’s temporarily ban all Muslims from coming into the country proposal is wrong and goes against what America is all about.

That said, Hillary Clinton’s hyperbolic statement about Trump helping ISIS’ recruiting efforts made during the stealth Democratic debate Saturday night was both ridiculous and dangerous.  There is absolutely no proof her declaration is true, and it takes away from understanding the real terrorist recruiting tools. Her claim is an indication that she has is a lightweight when it comes to understanding the war against radical Islamists.

“He is becoming ISIS’s best recruiter,” she said during the debate, answering a question about how she would address those Americans who support Trump’s proposed ban on Muslims entering the U.S. She added that ISIS is “going to people showing videos of Donald Trump insulting Islam and Muslims in order to recruit more radical jihadists.”

This is what CNN said about Clinton’s claim:

It is difficult to speak to all of ISIS’ communication: Some of it happens in the open on social media sites, but other communications are hidden in what’s known as the “dark Web.”

While there have been some tweets and comments posted on ISIS-supported social media referencing Trump’s rhetoric, according to information sent recently by SITE Intelligence Groups, there is no evidence that ISIS itself has released videos featuring Trump.

Neither ISIS’ main media outlets nor any ISIS affiliates have used footage capitalizing on Trump’s anti-Muslim language, according to Laith Alkhouri, the co-founder and director of Flashpoint, a group that monitors jihadist activity online. However, Alkhouri noted in comments to CNN on Saturday that Trump’s comments do play directly into the recruitment playbook and he has no doubt they could eventually be referenced in official ISIS communications.

Alkhouri said the comments have also been mentioned in top-tier ISIS Web forums on the dark Web — not heavily discussed, but they were definitely part of the “news feed, if you will,” Alkhouri said.

The Clinton campaign directed CNN to an NBC News story published on December 8, in which the executive director of the SITE Intelligence Group says of ISIS: “They love him from the sense that he is supporting their rhetoric.”

“They follow everything Donald Trump says,” Rita Katz told NBC. “When he says, ‘No Muslims should be allowed in America,’ they tell people, ‘We told you America hates Muslims and here is proof.'”

Ultimately, however, there is no evidence of ISIS using videos of Donald Trump for recruitment.

The liberal Politifact agreed, they concluded:

We were unable to find any evidence to support this. The Clinton campaign did not provide any evidence that this is already happening — only that it could be happening, or that it may in the future. If ISIS was using Trump for recruitment videos, we would expect a frenzy of media coverage over it. We rate this claim False.

If one reads the explanations about ISIS recruiting success, it is not easily explained by what one or another person says. Nowhere is there anything saying that Trump or any other politicians comment helping ISIS with it’s recruitment efforts. One thing that was mention is ISIS’ battlefield successes:

“Militant groups across the Muslim world see the success ISIS has had so far in Syria and Iraq and opt to join it — often leaving behind organizations plagued by infighting,” CNN national security analyst Peter Bergen wrote in a CNN.com column.

NOTE: it me, or does Hillary Clinton have a strange obsession with nonexistent videos and Islamic terrorists?

While I still disagree with Trump’s idea to temporarily ban all Muslims, Hillary Clinton’s claim that “the Donald,” feeds ISIS recruitment efforts was just an indication of a lack of understanding of the dangers we face in America from the Islamist terror group.

And that wasn’t the only example from the Saturday Night debate. She also made the extraordinary claim that  we are are finally where we need to be in our battle against ISIS.

“Look at these Complex problems. I wish it could be either or; I wish we could say yes, let’s go destroy ISIS and let’s let Assad continue to destroy Syria which creates more terrorist, more extremist by the minute. No. We now finally are where we need to be. We have a strategy and a commitment to go after ISIS which is a danger to us as well as the region and we finally have a UN Security Council resolution bringing the world together to go after a political transition in Syria. If the United States does not lead there is not another leader, there is a vacuum and we have to lead if we’re going to be successful.”