President Biden Says ‘No Amendment To The Constitution Is Absolute’ — Is He Serious?! (VIDEO) 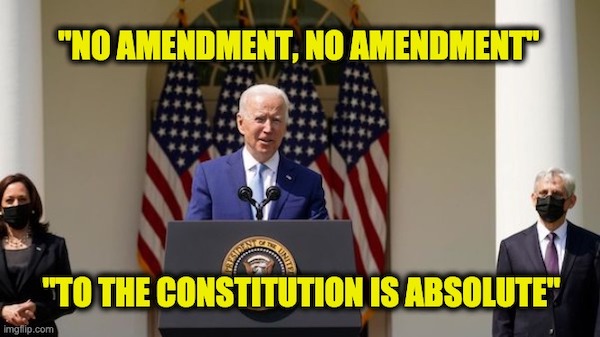 Dementia Joe doesn’t realize the implications of this, does he? no constitutional amendment is absolute

As promised, President Joe Biden is pushing for gun control. In his tightly-controlled presser on Thursday announcing new Executive Orders on gun control, he made a stunning statement that extends far beyond the Second Amendment. President Biden said that “nothing” he recommending “impinges on the Second Amendment” but also that “no amendment to the Constitution is absolute.”

So…what does it matter if it does impinge on the Second Amendment if it’s not an absolute right? Especially the last four words of the amendment “shall not be infringed.” That point isn’t addressed in the presser.

Then, President Biden insists that gun violence is a “public health crisis.” (This is probably because authoritarians have made sure that the COVID restrictions cannot be criticized since they’re in place for “public health” reasons.)

“Today we’re taking steps to confront not just the gun crisis, but what is actually a public health crisis,” Biden said from the White House Thursday.

“Nothing, nothing I am about to recommend in any way impinges on the Second Amendment,” the president said, calling arguments suggesting that those constitutional rights are at stake “phony.”

He added: “So the idea is just bizarre, to suggest that some of the things we’re recommending are contrary to the Constitution.”

Pres. Biden: "No amendment to the Constitution is absolute. You can't yell 'fire' in a crowded movie theater and call it freedom of speech. From the beginning, you couldn't own any weapon you wanted to own."pic.twitter.com/Kkur095a7Q

We could go on about how incredibly disingenuous this is, especially since Biden flat-out lied about background checks and gun shows…

BIDEN: "You can go to a gun show, you can buy what you want and no background check."

This is a total lie and shows how little this administration understands about gun laws. pic.twitter.com/84BCIvGWLM

But let’s focus on the point that Biden said that no amendment to the Constitution is absolute.

Ok, Old Man… if that’s how you really feel.

Your right to free speech? Biden says that’s up for grabs.

Freedom of religion? Peaceable assembly? His administration can limit it. No problemo. 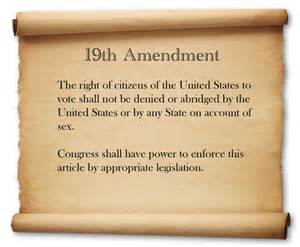 Freedom of the press? It is totally reasonable to stifle that if they’re doing things like reporting on the President’s son’s depravity and criminality.

And that’s just the First Amendment. All the others are up for grabs, too.

Unreasonable search and seizure? Eh… that’s not absolute according to the sitting President.

Due Process, a fair trial, habeas corpus, protection from double-jeopardy? Pfft! Who needs those, right Joe?

What about Amendment #13? Can the government make exceptions to the ban on slavery? Dementia Joe’s statement also means that the 19th Amendment. It grants women the right to vote—that one is not absolute either? 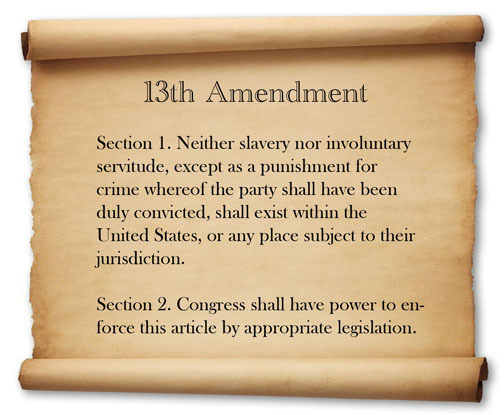 Does Joe Biden really believe that? No, of course not!

It’s a ridiculous position, but the President of the United States threw it out there anyway.

Can you just imagine what would have happened if President Donald John Trump said anything remotely as outrageous as this? There would literally be protests in the streets.

And. There. Should. Be. (Peaceful ones, of course, not the “mostly” peaceful protests of the summer.)

But we’ve got an authoritarian President that says this kind of crap, and he isn’t called out on it because the corporate media is high on the smell of his farts from the brown-nosing. After all, it is the Re-Bama administration.

Joe Biden has made the United States of America and the U.S. Constitution a joke because he is a joke.

The Founders would be ashamed.

no constitutional amendment is absolute