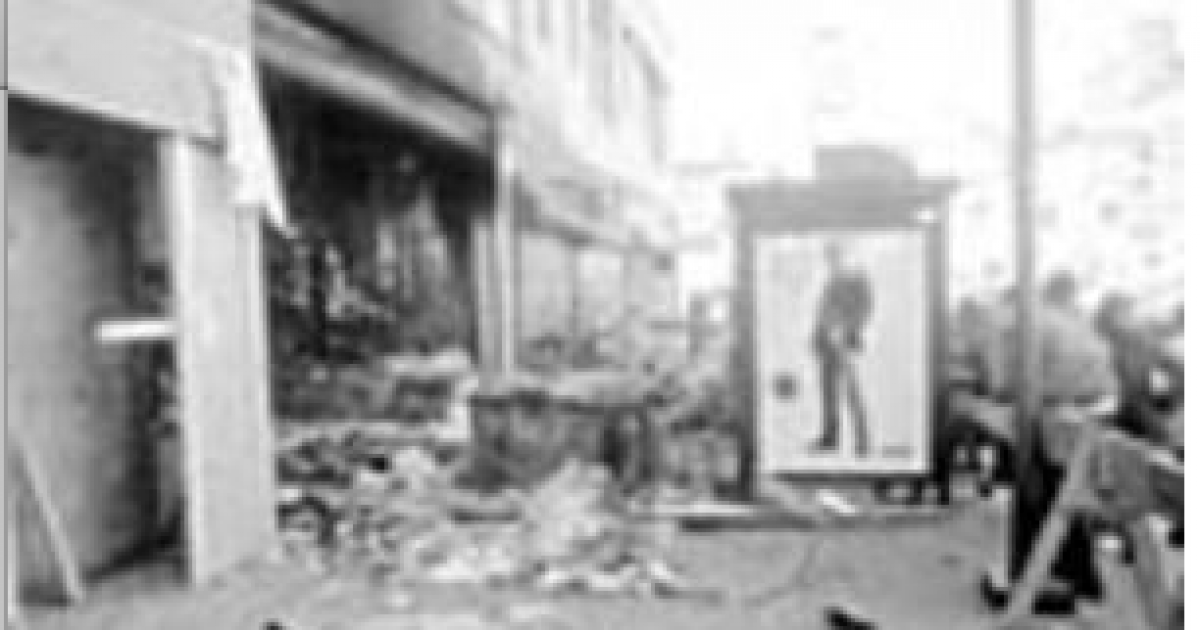 The United House of Prayer, a large African-American church was also a major landlord in Harlem. They raised the rent Freddy’s Fashion Mart, a Jewish-owned clothing store which had operated from the same Harlem location for over 40 years. In turn Freddy’s had to raise the rent on its sub-tenant, a black-owned record store. A landlord-tenant dispute ensued. As he has done so often in his life, Al Sharpton turned this non-racial economic dispute into a racial conflict.

The Sharpton-led protests began in August and came to a head on the morning of Friday, December 8th when Roland James Smith, Jr., who had been part of the Sharpton’s protests, walked into Freddy’s Fashion Mart, pulled out a gun, ordered all the black customers to leave, spilled paint thinner on several bins of clothing and set them on fire — a fire that resulted in killing 7 people plus Smith. The only African American left in the story was Freddy’s security guard Kareem Brunner, 22-years-old, who was ordered to stay by the mass murderer Smith.

Soon after the massacre, the Jewish Action Alliance, a New York-based civil-rights group, released audiotapes and transcripts of several of Sharpton’s weekly radio show in which Morris Powell, leader of the 125th Street Vendor’s Association, can be heard using racial and anti-Semitic language to encourage Harlem residents to boycott Freddy’s. Learning from his Crown Heights experience Sharpton let others push the anti-Semitic hatred but it was all done on his show.

“We are going to see that this cracker suffers,”  Powell is heard telling a crowd in one broadcast on  Aug. 19.

“Reverend Sharpton is on it. We have made contact with these crackers. We don’t expect a lot out of them. They haven’t seen how we feel about anything yet. We are going to show them.”

They think they gonna drive this man out of business, they gotta be out of their minds. We are not gonna stand idly by and let a Jewish person come in Black Harlem and methodically drive black people out of business up and down 125th Street. If we stand for that, we’ll stand for anything. Which we’ve been doing.

At a rally recorded on Sept. 9, Sharpton is heard telling a crowd:

Ironically Sharpton was the interloper, he was living in Hollis Queens around the time Freddy’s opened in Harlem and living in New Jersey when Freddy’s was burned down. When other white-owned businesses fled the neighborhood as the population became more African-American, Fred Harari the owner of Freddy’s continued to serve the neighborhood.

In court papers filed the day before the fire, Harari and two employees described weeks of protests outside the clothing store. Sharpton’s National Action Network sets up picket lines; customers going into Freddy’s were spat on and cursed as “traitors” and “Uncle Toms.” Some protesters shouted, “Burn down the Jew store!” and simulate striking a match. “We’re going to see that this cracker suffers,” says Sharpton’s colleague Morris Powell.

An affidavit by Kareem Brunner, a black security guard killed in the blaze, said that he had been called a “cracker lover” and “would get mine as a traitor [to the black race].” Brunner, was the only black that Smith did not order out of the store before setting it afire.

Store manager, Steve Brodsky, described how a particularly vicious demonstrator called Shabazz would force his way into the store, pushing Brodsky aside and shout “I will be back to burn the Jew store down — burn, burn, burn.”

On Dec. 8, one of the protesters , Roland James Smith, Jr listened. He burst into Freddy’s, shot four employees point-blank, then set the store on fire. Seven employees died in the inferno.

He criticized NYPD investigators for quickly linking the fire to the protesters. But the police evidence and the tapes from the Jewish Alliance proved him to be a liar. Not only were the protesters involved they did it right in front of him at Freddy’s or on his radio show.

After first telling the press “What’s wrong with calling someone a white interloper?” he apologized for using that term. He never apologized for the Jew-hatred broadcast on his radio shows and spoken at the rallies he helped to organize. He continues to deny that the rallies had anything to do with the firebombing.

Al Sharpton cannot be forgiven for his role in the pogrom at Freddy’s or any of his other bigotry because he has never acknowledged his role, nor has he ever apologized (even though his actions/speeches, etc. were caught on tape).

But today Al Sharpton is a media darling with his own show on MSNBC, an adviser to President Obama and friend to AG Eric Holder. And he still makes excuses for hatred: