“[S]He has not so much brain as ear wax.” William Shakespeare About Sunny Hostin 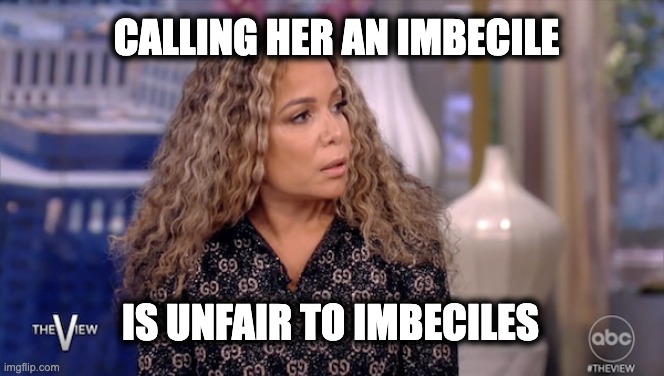 Sunny Hostin should have learned by now that when you engage in a battle of wits, it helps if you’re armed.

It is perhaps unwise for the mediocre co-host of an atrociously bad tv show to launch a hypocritical verbal attack on a woman whose words had the world’s thugs and dictators shaking in their boots.

Hostin clearly isn’t bright enough to understand that, either.

During the segment, the newly-domesticated “controlled opposition” conservative for the show, Alyssa Farah Griffin, mentioned Nikki Haley as a possible candidate for the GOP, citing her record as an “incredibly effective governor in South Carolina.”

Hostin — the slightly darker, slightly dumber, slightly younger version of Joy Behar — then chimed in and asked, “What is her real name again?”

Griffin, ever the willing squishy-conservative toady keen to shiv her own at the drop of a hat, said that she “wouldn’t be surprised” if Haley decided to go by “Nikki” in order to “avoid prejudice” in South Carolina at that time. This implies that South Carolina was teeming with racist bigots that couldn’t accept a Punjabi family immigrating to the United States.

Except… that’s not the case.

But that’s not good enough for the ignorant, bigoted Hostin who accused Haley of just wanting to “pass” as white. It’s a disgusting smear often used against fair-skinned Indians like Haley.

“I think if she leaned into being someone of color, this would be different,” Hostin said haughtily. “There’s some of us that can be chameleons and decide not to embrace our ethnicity so that we can pass, that we don’t have to go by –”

Sarah Haines then jumped in and pointed out that “Sunny” isn’t even Hostin’s real name.

Hostin then smugly defends using “Sunny” instead of her given name because “many Americans can’t pronounce ‘Asunción’ because of the undereducation in our country.”

The two faux-servatives then start talking over each other, and Whoopi Goldberg — whose real name is Caryn Johnson — abruptly cuts off the discussion. Note: Goldberg is a stage name, so don’t blame her on the Jews.

The question is, how the heck did she get that nickname with such a sour disposition? Perhaps it’s meant to be ironic.

It’s also not a big surprise that Hostin would reject a very Catholic name like “Asunción” — referring to the Catholic belief that Jesus’s mother Mary was taken bodily to heaven — and adopt something a bit more palatable for secular Libs.

Haley rightly blasted Hostin for assuming that “Nikki” is an English name that was adopted to “fit in” rather than a Punjabi name listed on her birth certificate.

Thanks for your concern @Sunny. It's racist of you to judge my name.

Nikki is an Indian name and is on my birth certificate—and I'm proud of that.

What's sad is the left's hypocrisy towards conservative minorities.

By the way, last I checked Sunny isn't your birth name… pic.twitter.com/NI3KZXjD6F

She let Hostin have it when she wrote, “What’s sad is the left’s hypocrisy towards conservative minorities.”

Haley is right. Hostin attacked Haley because she’s not the “right” kind of minority — the one that can be shoved into an identity box and be relied upon to consistently vote Democrat and hold the “correct” views.

“Tolerant” Lib Hostin doesn’t respect visible minorities who disagree with her on politics, and she seems to be quite willing to mock them or bully them into compliance.

She also clearly feels as though she’s superior to what she seems to see as self-loathing minorities that support the GOP. Just look a that woman’s posture while she’s talking about Haley — either she’s riled up and thinks that she’s so much better than Haley for not betraying her ethnicity by voting Republican, or her broom accidentally got stuck in her backside and has replaced her spine.

But then, she’d have to be in order to continue to be a member of “The View” Coven.

Fortunately, there are lots and lots of women that aren’t catty simpletons like Hostin, and most of them don’t watch “The View.”