Does Nicolle Wallace Think Trump Wanted To Hire Me, Or Is She ‘Hot’ For Anthony Scaramucci? 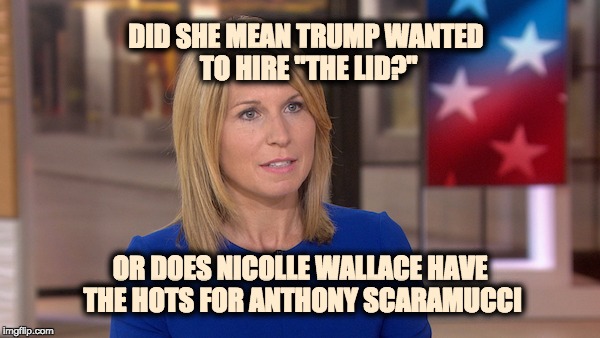 Republican-turned MSNBC political analyst Nicole Wallace claimed on Friday that President Donald Trump’s appointment of Anthony Scaramucci is more about Me (The Lid) on the White House Communications Team than anything else (well either that or Anthony Scaramucci makes her heart flutter).

President Trump did not want him to resign but Spicer felt there were “too many cooks in the kitchen” promoting the president’s message.

“I just thought it was in the best interest of our communications department, of our press organization, to not have too many cooks in the kitchen,” Spicer told Fox News’ Sean Hannity in an interview hours after he resigned from the White House on Friday.

However over at MSNBC Nicolle Wallace had a different take on the story. Wallace who was former President George W. Bush’s own communications chief, and advised the McCain/Palin campaign where her daily exercise included throwing Sarah Palin under the bus,  called into MSNBC and blasted President Trump for the move. Wallace claimed the POTUS hired Scaramucci because he wanted “better-looking men”

“This is about someone who took some skin out of one of Donald Trump’s archenemies and that’s the cable news network CNN,” Wallace said about Scaramucci. “So, I wish this were a story about a really important job inside the White House, a post that speaks for the country and the president around the world, but this is about Donald Trump wanting better looking men spreading his message.”

Obviously that is a false charge because if the President wanted better looking men to spread his message he would have gone for the best. However, I was not contacted by the White House to take the job. Perhaps I am looking at it the wrong way. Maybe Ms. Wallace has the hots for Scaramucci and the married liberal had no other way to publicly profess her love.

BTW Spicer was replaced by Sarah Huckabee Sanders, a woman.

Watch the Wallace rant on the video below: