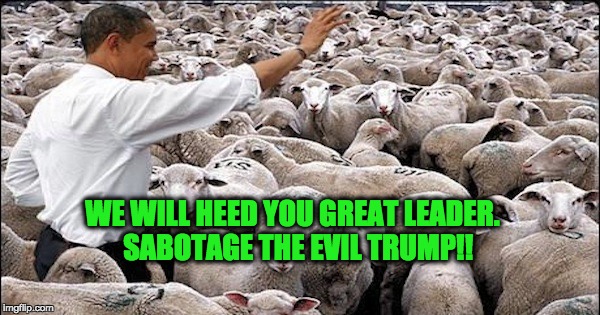 So Vice Admiral Robert Harward is now out of the running for as National Security Advisor, reportedly because he insisted on bringing in his own staff.

But whoever is named to replace LTG Michael Flynn must bring their own staff into the National Security Council. Why? Because if he doesn’t, he will suffer the same fate as General Flynn, or be forced to submit to the Permanent Government, a/k/a the Deep State.

I’m not referring to KT McFarland, whom CNN claimed that Admiral Harward reportedly wanted to replace. I’m talking about the National Security staff, the representatives of the Deep State who have launched their own Occupy movement in the White House.

In the final months of his administration, President Obama stacked the NSC staff with hundreds of political operatives, many of whom were carried over by the new administration.

Why did the Trump transition team even think of carrying these people over? Because the NSC structure – or perhaps I should say, the fiction of the NSC structure – requires that most of the staff be comprised of “detailees” from the various U.S. government agencies whose operations the National Security Advisor is supposed to coordinate.

There were no Trump appointees in any of the national security agencies until just recently, thanks to Democrat obstruction in the Senate. This provided a huge opportunity to the President’s opponents.

Want to know who broke the law by leaking information gleaned from a highly-classified U.S. intelligence program to monitor foreign diplomats about Michael Flynn? Interested reporters – if there are any left outside of conservative news outlets – should start by looking at former CIA director John Brennan, an Obama  political operative.

Brennan worked hard to seed the CIA with acolytes and supporters, career “intelligence” officers whose real job was not to protect and defend the United States of America, but to sabotage the presidency of Donald Trump.

This is not the first time this has happened.

But Brennan’s actions go far beyond those of earlier shadow warriors. Not only was he the CIA director, but he has openly and repeatedly challenged the new President, hectored and lectured him, implying that he is unfit for office. I do not know of any precedent where a former CIA director has behaved in such open opposition to a new president.

And the rot goes well beyond the CIA.

Take a look at the Linked-In profiles of recent Obama administration NSC appointees. While I do not pretend to have any information to suggest that any of these individuals leaked classified information to discredit General Flynn, or will do so in the future, their public profiles show how difficult it will be for the incoming National Security Advisor to right this ship, unless he has installed his own crew.

Here are just a few examples:

Mr. H. was another John Brennan protégé who was detailed to the White House by Brennan in July 2015, where he became the “Senior Advisor for Migrant Screening and Vetting.” Gee, that’s a subject that’s been in the news, isn’t it?

I do not know any of these individuals – or the 160 more current Obama holdovers who list their profiles on Linked-In, most of whom were hired in the past year by NSC.

But I do know a security threat when I see one. And this is it.

Whatever the real reason Admiral Harward turned down the National Security advisor’s job, I would counsel General Flynn’s successor to end the Occupation of the West Wing by these Obama burrowers. Should he fail to do so, he will die a death of a thousand leaks.

You can take that to the bank.

Kenneth Timmerman’s reporting has revealed untold narratives about recent major international events including the Benghazi terror attack, Iran’s weapons program, 9/11, the Arab-Israeli conflict, and the persecution of Christians in Iraq (just to mention a very few).
A prolific author (15 books) Kenneth’s latest book, “Deception: The Making of the YouTube Video Hillary and Obama Blamed for Benghazi,” tells the the story of the big lie–that infamous YouTube video Hillary Clinton and Barack Obama claimed sparked the Benghazi attacks. You can follow Ken Timmerman at his website,

Undoubtedly though, the highlight of Ken’s career is his two appearances on the Lid Radio show (I can dream can’t I). You can follow Ken at his website KenTimmerman.com  on twitter  @KenTimmerman and his Facebook page.