Meet The New Taliban, Same As The Old Taliban. 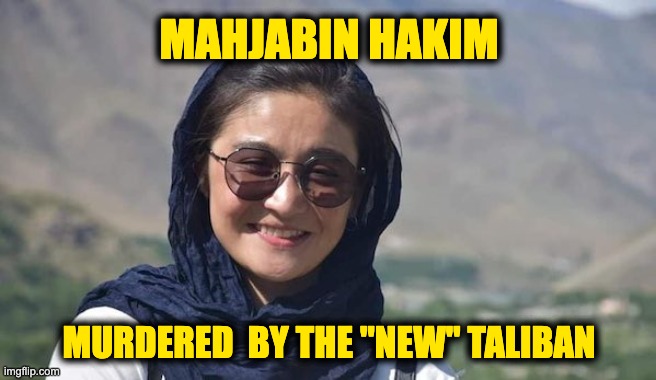 If one believes what team Biden is telling us, the professional acting terrorists in Afghanistan are a new kinder, more gentle “new” Taliban. This week, they beheaded a teen girl for the horrible crime of playing volleyball. Meet the new Taliban, same as the old Taliban.

According to reports, Junior volleyball player Mahjabin Hakimi’s coach says that the Taliban beheaded the girl and then told the media that she committed suicide. As someone who regularly watches DiscoveryID, I can report that there are many ways to kill oneself, but hacking off one’s head isn’t one that I’ve seen or read about—-not even on either of Joe Kenda’s shows.

n an interview, coach Suraya Afzali (name changed) said a woman player named Usi was killed by the Taliban earlier in October, but nobody learnt about the gruesome murder as the insurgents had threatened her family not to talk about it.

Mahjabin played for the Kabul Municipality Volleyball Club before the collapse of the Ashraf Ghani government, and was one of the club’s star players. Then, a few days ago, pictures of what seemed to be her severed head and bloodied neck turned up on social media.

Using the pseudonym Suraya Afzali, due to safety fears, the Afghan women’s national volleyball team coach warned that only two of her players could escape the country ahead of the takeover by the Taliban terrorists.

The rest are now being hunted down one by one., and they are marked for death.

“The Afghan national women’s volleyball team was established in 1978 and has long been a beacon of hope and empowerment for young girls in the country. However, Mahjabin’s death has fueled fears of being targeted by the Taliban. Efforts by members of the team to gain the support of foreign organisations and countries to leave Afghanistan have so far been unsuccessful,” the paper said.

The NY Post adds that the murder of Mahjabin Hakimi wasn’t an isolated case. Female athletes across Afghanistan live in fear.

One of the players who escaped, Zahra Fayazi, told the BBC last month that at least one of the players had been killed. “We don’t want this to repeat for our other players,” she told the broadcaster from her new home in the UK. “Many of our players who are from provinces were threatened many times by their relatives who are Taliban and Taliban followers.

“The Taliban asked our players’ families to not allow their girls to do sport, otherwise they will be faced with unexpected violence,” Fayazi said.

“They even burned their sports equipment to save themselves and their families. They didn’t want them to keep anything related to sport. They are scared,” she said.

Apparently, Team Biden’s claim of a “new” Taliban is as accurate as their claims that all the Americans got out of Afghanistan.

Parts of this post were first seen at the Washington Exterminator.