New Selling Baby Parts Video: Some Fetuses “Just Fell Out,” Others Had To Be “Ripped Out” 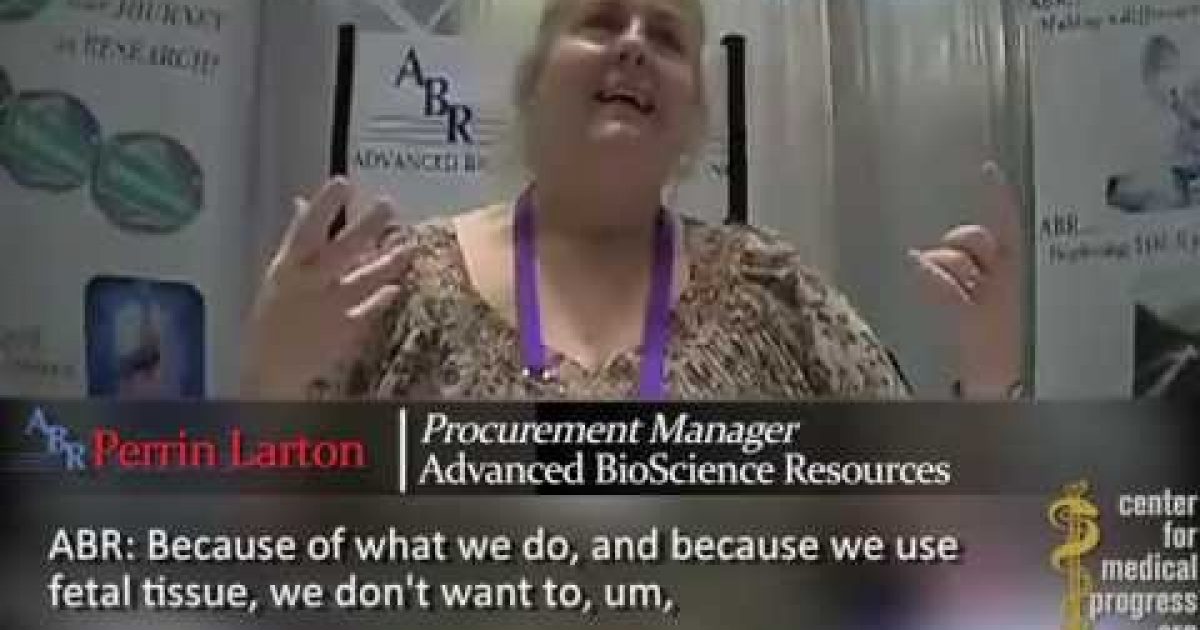 “They do induce fetal demise at 21 weeks.” This statement by Perrin Larton, the Procurement Manager for ABR is illustrative of the emotionless way the people in the selling baby parts industry look at their task. “Fetal demise” sounds so much nicer than killing babies. And the sonogram picture above demonstrates that at 21 that is no “clump of cells.”

The ninth Center For Medical Progress video is out, this one focuses on Advanced Bioscience Resources, Inc. (ABR), the small and secretive company that has harvested and sold fetal body parts at Planned Parenthood clinics longer than any other entity

The video features undercover conversations with Dr. Katharine Sheehan, the long-time medical director of Planned Parenthood of the Pacific Southwest until 2013; Perrin Larton, the Procurement Manager for ABR; and Cate Dyer, the CEO of rival fetal tissue procurement company StemExpress. As you will see when you watch the video below it’s a very competitive business.

Planned Parenthood’s Sheehan tells actors posing as a new human biologics company that at PP Pacific Southwest, “We have already a relationship with ABR.” Sheehan explains, “We’ve been using them for over 10 years, really a long time, just kind of renegotiated the contract. They’re doing the big collections for government-level collections and things like that.”

In an August 27 letter to Congress, Planned Parenthood CEO Cecile Richards referenced a California Planned Parenthood affiliate that currently receives $60 “per tissue specimen” from a tissue procurement organization. The Center for Medical Progress, the group producing the videos, identified Planned Parenthood Pacific Southwest and ABR as the affiliate and TPO referred to in Richards’ letter, based on process of elimination.

“We now know from Cecile Richards’ letter that $60 per collected tissue specimen is what will ‘get a toe in’ to harvest baby parts at Planned Parenthood Pacific Southwest,” wrote CMP Project Lead David Daleiden. As multiple tissue specimens often come from a single fetus, $60/specimen can quickly add up to hundreds of extra dollars in revenue per abortion. The sale or purchase of human fetal tissue is a federal felony punishable by up to 10 years in prison or a fine of up to $500,000 (42 U.S.C. 289g-2).

Perrin Larton, the Procurement Manager at ABR, is shown describing ABR’s fetal tissue harvesting practice to a prospective buyer. “I literally have had women come in and they’ll go in the O.R. and they’re back out in 3 minutes, and I’m going, ‘What’s going on?’ Oh yeah, the fetus was already in the vaginal canal whenever we put her in the stirrups, it just fell out,” she explains of situations where there has been a great enough degree of cervical dilation to procure an intact fetus.

ABR, founded in 1989 by CEO Linda Tracy, charges $340 per second-trimester fetal tissue specimen, yet seems less concerned about tissue quality than other harvesting companies: “Whenever we have a smooth portion of liver, we think that’s good!” says Larton. Apparently doctors grab the first part of the baby they can, and often they drag the baby out of the womb via their abdomen which sometimes damages the organs before they are sold off, “Everything just gets ripped out.”

Cate Dyer, who used to work as a procurement technician for ABR before founding her own company StemExpress, shares some of the financial details of ABR: “They were funding places in Hawaii for themselves,” she divulges. “Some staff–not that I know so much on the Planned Parenthood side, but I wouldn’t be surprised–there are some staff in the past that have been on the payroll with ABR.” According to Dyer, ABR would pay an “advisor fee” to a clinic manager or director in order to preserve their exclusive right to harvest fetal tissue at that location. “There’s like, well enough known,” says Dyer, that “for a long time there were certain clinics that because they had paid advisors that were sitting on boards for these clinics, that were also an advisor to ABR, you were just never going to go anywhere with them, you know what I mean?”

“In the twisted world of baby parts trafficking from Planned Parenthood abortion clinics, there are few unbroken rules,” notes CMP’s Daleiden. “After the serious admissions in Planned Parenthood’s letter to Congress last week, it is imperative for lawmakers and law enforcement to act decisively to determine the full extent of Planned Parenthood and their proxies’ lawbreaking, hold them accountable, and stop the taxpayer funding of these barbaric atrocities against humanity.”