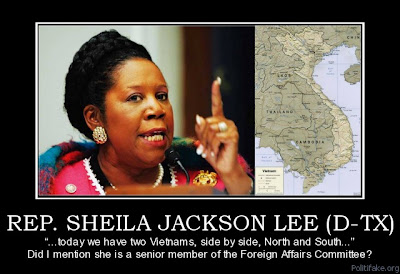 Its been well known the Ms Jackson Lee’s brain lights are set to dim.  Some would say that she rivals Barbara Boxer for the title of dumbest person in Congress. Jackson Lee who once wasted the Congresses time with a piece of legislation to honor the late Michael Jackson (A Tribute to an American Legend and Musical Icon) that made the accused child molester seem like Mother Teresa. Then there was the time she stood on the floor of the house  discussing how North and South Vietnam are living peacefully side by side, even though there hasn’t been a North and South Vietnam since Gerald Ford was President.  Then there was the one earlier this month where she told the House Judiciary Committee that the “penalty” in the health-care law enacted last year by Congress imposes on individuals who do not buy health insurance is not in fact a penalty.

Now the law itself states: “If an applicable individual fails to meet the requirement of subsection (a) [having a government-approved health-insurance policy]… there is hereby imposed a penalty with respect to the individual.”

Elsewhere, in a section entitled “Payment of Penalty,” it says that individuals failing to carry a government-approved health insurance policy must pay a maximum penalty of $750.

But in Sheila Jackson-Lee’s twisted logic, a penalty is not a penalty even when it’s called a penalty.

“I would make the argument, one, that instead it is an incentive to do right–that it is not penalizing because penalty is punishment,” Jackson-Lee told the Judiciary Committee.

Rep. Sheila Jackson Lee of Texas also hands out nicknames to the people who work for her. The Houston Democrat addressed one of her employees as “you stupid motherfucker.” And not just once, but “constantly,” recalls the staffer, “like, all the time.”

Another Jackson Lee aide recounts the time her parents came to Washington to visit: “They were really excited to come to the congressional office. They’re small town people, so for them it was a huge deal. They were actually sitting in the main lobby waiting area….[Jackson Lee] came out screaming at me over a scheduling change. Called me a ’stupid idiot. Don’t be a moron, you foolish girl’ and actually did this in front of my parents, of all things.”

Yet another staffer remembers requesting a meeting early on in her tenure to ask how best to serve the congresswoman. Jackson Lee’s response: “What? What did you say to me? Who are you, the Congresswoman? You haven’t been elected. You don’t set up meetings with me! I tell you! You know what? You are the most unprofessional person I have ever met in my life.” With that, Jackson Lee hung up the phone.

The report say that the Texas progressive may be the most demanding insensitive boss on Capitol Hill, a building  known for nasty bosses. 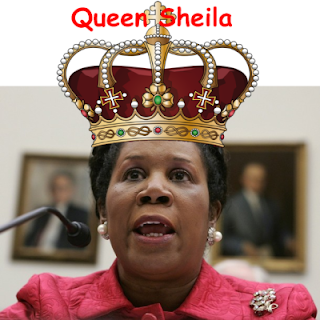 One staffer recalls a frank conversation with his doctor, who told him he needed to quit. “It’s your life or your job,” the doctor told him, warning that the stress and long hours were wreaking havoc on his body.

Out of the scores of staffers contacted by the website only one offered a tepid defense of her. Bug most talked about her abusive narcissistic manner.

“I am a queen, and I demand to be treated like a queen,” Jackson Lee once said, and apparently she wasn’t kidding. Her employees describe waiting for their boss for hours on end, sometimes late into the night, while she attends events or even sits in her office watching TV.

“You worked really, really, really late for her. When she was in town, you were in the office. So that meant, two, three, four o’clock in the morning – we were there,” one former staffer said.

“She liked to hold her staff meetings — she would individually pull in the deputy chief of staff, myself and some other people individually to go over different parts of her day. But she would literally wait until super late at night. None of us could go home, because she wouldn’t tell when she was coming back or if she wasn’t. And if she called and you didn’t answer, it was like World War III,” the source said.

….One woman who interviewed for a job in Jackson Lee’s office arrived at 5:00 p.m. but ended up waiting for hours. “I sat there, no kidding, from 5:00 p.m. until 10:30 p.m. They had me waiting, and this was just for the interview. Her staffers there kept telling me to be patient, that she puts everyone through the ringer…She actually went out to dinner while I was sitting there waiting for an interview,” the woman said. A Lee staffer called the woman at 11:15 p.m. after she’d just arrived home to beg her to come back. The congresswoman was finally ready.

….“I would have to wait for hours,” says Gladys Quinto, a former staffer whom Jackson Lee instructed to write a memo about why she was incompetent in front of other staffers. “I missed the last metro once. My roommate had to come pick me up.”

Nathan Williams, who quit his job when Jackson Lee threw a cell phone at him, told the Houston Chronicle in 2002, “I don’t think I ever got home before 11 o’clock at night.”

One unusual thing about Jackson Lee is that unlike most vampires, she likes garlic:

Jackson Lee’s requests don’t stop at the end of a normal working day. “In the middle of the night, people had to go get her garlic. She’ll call you at two in the morning for garlic because she takes them as supplements,” a former staffer said. Jackson Lee’s garlic runs were confirmed by other staffers, too, though no one could remember the exact brand of the supplement. The deputy chief of staff “would have to go get it, and he would have to go drop it off. It was some kind of a multi-vitamin,” another former staffer said.

Jackson Lee loves to play the race card even when the issue is not political but her lack of intelligence:

In 1997, for example, The Hill reported that the newly-elected congresswoman asked NASA officials whether the Mars Pathfinder photographed the American flag astronaut Neil Armstrong had planted on the surface of Mars. When it was pointed out that the flag in question was on the moon, not Mars, Jackson Lee cited bigotry. “You thought you could have fun with a black woman member of the Science Committee,” her then chief of staff wrote in a letter to the editor.

Then there was the time in 1993 when she demanded that more Hurricanes be named with African American-sounding names. I agree, we should name a hurricane nasty, dumb Jackson Lee after an African American Congresswoman.

Given Jackson Lee’s apparent touchiness on racial questions, there’s a certain irony in the fact that aides claim she is far harsher to the African Americans who work for her. “’You stupid mother-effer’ was like a constant,” says one. “Like, all the time. But the interesting thing is she would really project that behavior more towards her African American staffers. She would have other ethnic groups in the office, like interns or whatnot. But it was really her African American staffers who she felt comfortable enough to really curse out…. This is something we always talked about. We chalked it up to her just feeling more comfortable acting out her aggression toward a certain group of people versus others.”

Oh so she is a racist ! Wait she can’t be racist, she doesn’t disagree with Obama.

Not surprisingly, Jackson Lee has one of the highest staff turnover rates in Washington. Over the last ten years, at least 39 staffers have left within one year. Over that time, Lee has employed at least nine chiefs of staff, eight legislative directors, and 18 schedulers or executive assistants, according to records of federal disclosure forms published by the website Legistorm. Nine staffers left within two months, 25 within 6 months.

The many veterans of Jackson Lee’s office meet regularly for drinks and stories. We “still get together to have a cathartic release,” says one. “We sit around and tell these stories and just work ourselves into a state of rage.”

YIKES, it seems to me that someone who abuses staffers like that shouldn’t be allowed staffers. Maybe they should take them all away and then if she complains ask her how many staffers she has, it will probably take her weeks to count from one-to-zero.