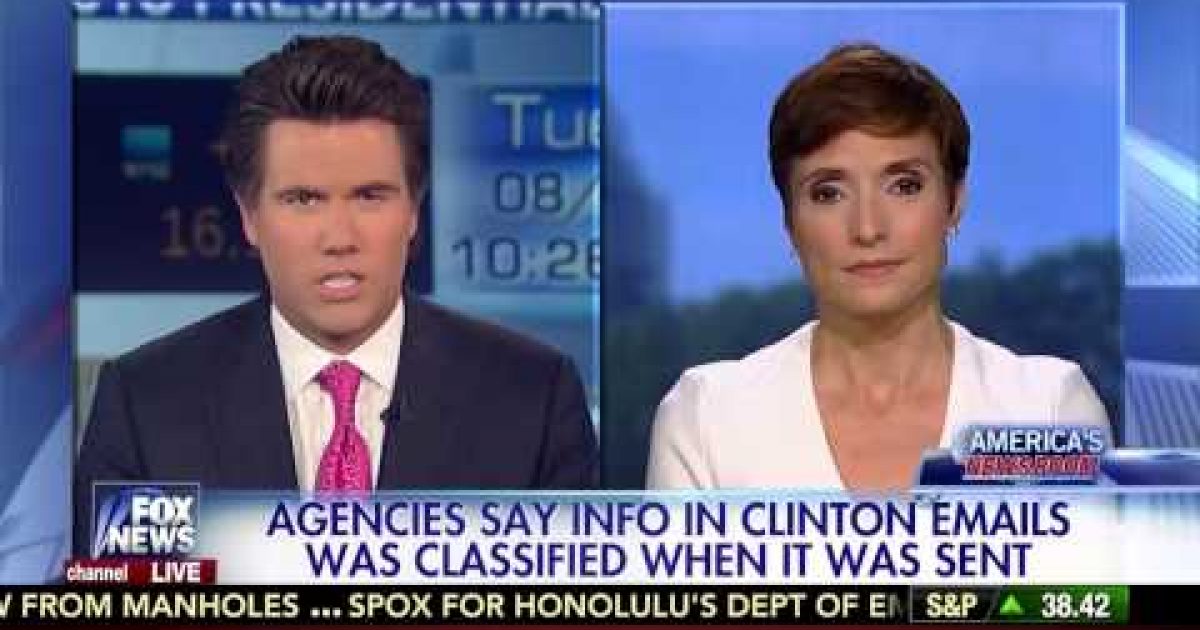 Catherine Herridge of Fox News keeps getting closer to that smoking gun. In 2009 Barack Obama issued an executive order (a good one) which basically said only the agency that first classifies something can denote it unclassified. Apparently the email that started it all, one from Huma Abedin, contained information which was designated as classified by the DIA, the NSA and the NGA, and they never changed their minds.

Now while Hillary keeps claiming there is a difference of opinion the answer is no there isn’t–because the state department doesn’t get an opinion on this particular matter. And apparently undersecretary of state Patrick Kennedy, knows this because he spent last month lobbying congress to believe that because of an article in the Irish Times the information was no longer classified. The only problem is like the State Dept., the Irish Times does not have a say in the matter (and neither does the elect Hillary committee).

Below is a transcript and video of Herridge’s report:

Herridge: One of the cardinal rules is only the agency that gets the information has the authority to declassify that information, and that’s why the state department and Mrs. Clinton and her team are in such deep trouble over these e-mails. Fox news confirming the e-mail from Huma Abedin that kick started the FBI probe contained classified information from three intelligence agencies, the DIA, the NSA and the NGA which overseas U.S. Governments by satellite. All three agencies have confirmed the intelligence was classified when it was sent three years ago and remains classified. But the state department claims the intelligence was unclassified even though they didn’t own it and released the e-mail, now simply stating there’s a difference of opinion.

H. Clinton: What you’re seeing now is a disagreement between agencies saying, you know what? They should have, and the other saying, no, they shouldn’t. That has nothing to do with me.

Herridge: But under this executive order, 13526 signed by Mr. Obama in December 2009, only the three intelligence agencies who own that information in the first place have the authority to declassify it, not Mrs. Clinton and not the state department, Leland.

Vittert: What’s the state department saying about this, Catherine? Are they challenging this in some way?

Herridge: These classification decisions are final and not open to negotiation. Though Fox News has learned that a senior state department official, Patrick Kennedy — who is deeply involved in the Benghazi controversy — is running major interference on the e-mails. Two sources confirm that undersecretary Kennedy went to Capitol Hill in early July and argued the Abedin e-mail was not classified, and Kennedy cited an Irish Times news report about the Libyan revolution to claim the information was already out there. Increasingly, the administration is punting on every email question citing the sensitivity of the ongoing information.

Earnest: I’m obviously going to be reluctant about the to — reluctant to have much to say about ongoing investigations. My understanding is that most of those investigations are geared toward the handling of that information and are not targeting secretary Clinton.

Herridge: That statement appears to be misleading because Fox News is told one of the issues the FBI is considering in its investigation is whether Mrs. Clinton should have known based on the detail in the e-mails that she was handling classified information regardless of the markings on the documents.