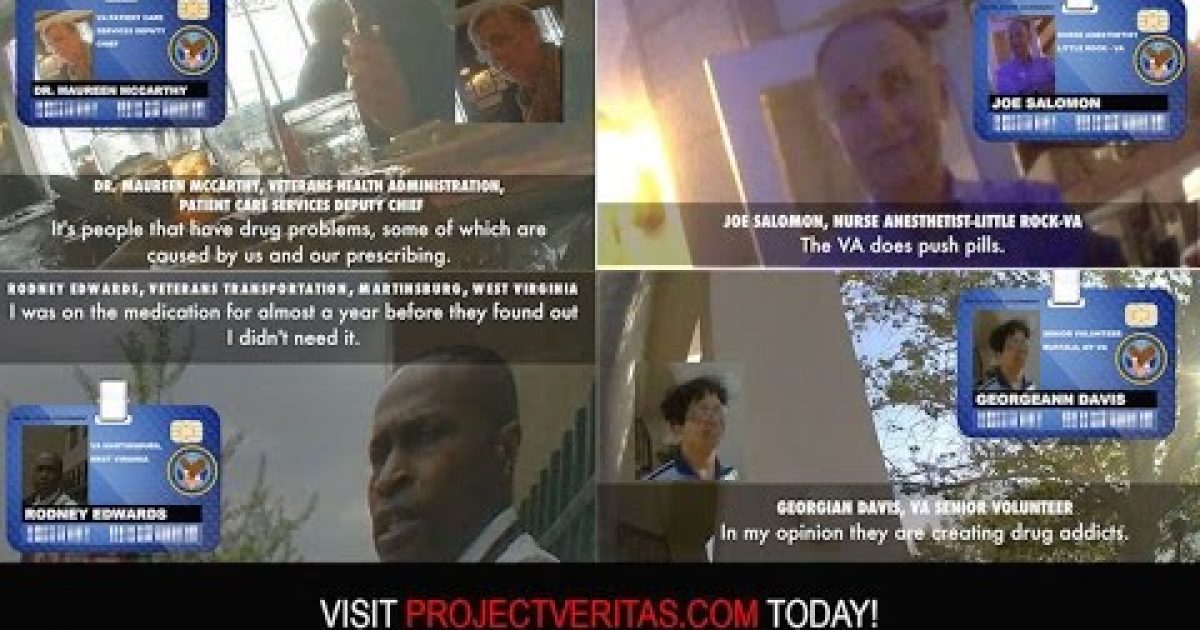 If you thought the VA Scandal was over “you ain’t seen nothing yet!”

This morning James O’Keefe’s Project Veritas released the first of what I understand will be a series of videos exposing the drug culture in the Veterans Administration. Undercover journalists will be seen talking to VA Staff who admit they are over prescribing drugs, turning veterans into addicts and leading to their deaths.

The new video (embedded below) features:

“various VA employees, contractors and volunteers discussing the pill pushing culture of the Department of Veterans Affairs (VA) and the adverse affects it is having on our nation’s veterans. Dr. Maureen McCarthy, the Deputy Chief of Patient Services for the entire VA, was caught on hidden camera telling a Project Veritas investigative journalist that: “It’s people that have drug problems, some of which are caused by us and our prescribing.” In discussing the various cocktails of drugs given out by the VA, McCarthy stated: “That combination in particular is like candy for some people. It’s like they want it, they want it, they want it.”

Based on the instigation we learn that the VA appears to be a bit  “too eager to simply write prescription after prescription” because it saves time so they can “move on to the next patient,” which results in many patients with P.T.S.D. never really being treated, only doped up.

Georgeann Davis, a senior VA volunteer based in Buffalo, NY, told a Project Veritas investigative journalist that: “In my opinion, they are creating drug addicts.”

Also on the video O’Keefe sits down for an on-the-record interview with Bob Cranmer, “whose son David was a veteran who tragically took his own life one month after being diagnosed with Post Traumatic Stress Disorder (P.T.S.D.). Cranmer tells O’Keefe that he is indeed angry with the VA and that he believes his son’s death was preventable.”

“This story truly saddened and humbled me,” stated James O’Keefe; “twenty-two veterans taking their own lives everyday after they have returned home from the battlefield is incomprehensible and unacceptable. The acknowledgement by Dr. McCarthy, a high ranking VA official, that the VA is essentially turning its patients, our veterans, into drug addicts is shameful and most certainly warrants both congressional and public scrutiny. Project Veritas will continue to expose the VA and fight for out nation’s heroes.”