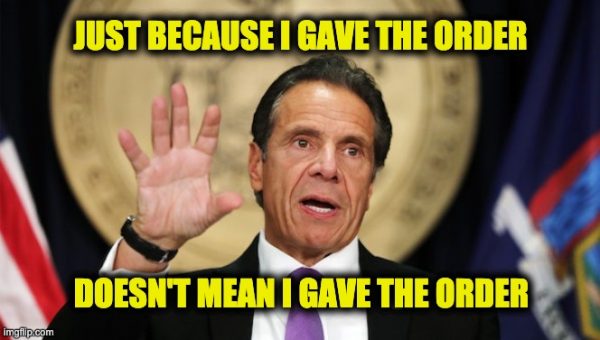 Cuomo, the far-left governor of NY State, who shares a brain with his brother Chris, is a media darling held up as an example of how to handle the pandemic, despite the fact he issued an order directing nursing homes to take in patients that had the highly contagious coronavirus that would have otherwise been sent to Hospitals. The Gov. keeps lying about his directive, and the MSM generally fails to confront him on it. His latest lie is that he didn’t issue the order he issued. new Cuomo lie

On March 25, 2020, New York Governor Andrew Cuomo ordered: “No resident shall be denied readmission or admission to a nursing home solely based on a confirmed or suspected diagnosis of COVID-19. Nursing homes are prohibited from requiring a hospitalized resident who is determined medically stable to be tested for COVID-19 prior to admission or readmission.” That order led to the COVID deaths of over 11K seniors.

Since that order, Gov Cuomo has blamed everyone except himself for the Nursing Home deaths. The list of Cuomo’s blame game includes the nursing home patients themselves, President Trump, healthcare workers, the feds, and the fact that old people die.

He has now taken a different approach. Interviewed on NBC’s Today Show Wednesday, Gov.Cuomo’s lie was that there never was an order.

GEIST: “So, governor — governor, just to follow on that, though, at the time in March absolutely there were — the idea that the hospitals were going to be full was a real one, you wanted to free up beds. But to Jonathan’s question now, you do a lot of reflecting in this book and you admit to some mistakes, maybe we should have done masking sooner and maybe we should shut things down earlier, that’s all early March fog of war stuff and we get that. But with the benefit of hindsight, would you not have issued that March 25th directive to send COVID positive patients back to nursing homes and will you do it again if this comes up?”

CUOMO: “Yeah. Willie, I hate to get technical with you but sometimes these things are technical. There was never a directive that said we will send COVID positive people back to nursing homes. The directive which was modeled on the federal directive said you cannot discriminate. But the state law clearly says a nursing home can’t accept the person unless they can — can treat them. Having said that, would my health department have followed the federal guidance? Obviously not, knowing the political issue it was going create, but there was no issue, in reality, is what I’m saying. Because we never did have a scarcity of it beds. We always had additional hospital beds and emergency beds. So no nursing home was forced to take someone. We never got there. Other states are there today —“

Never a directive?  Then what the heck was this” 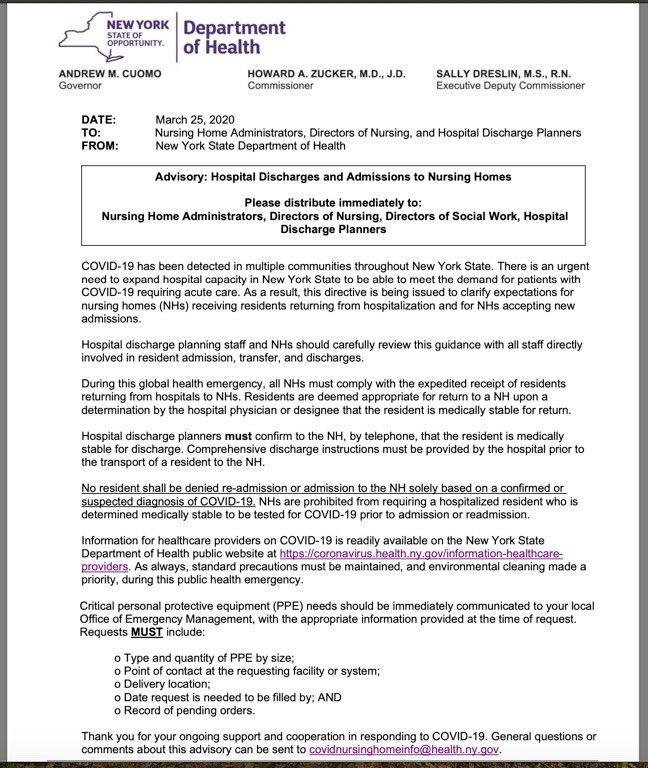 The above used to be on the NY State’s official website, but as revealed by the Washington Examiner at the end of May 2020, it mysteriously disappeared.

Jance Dean, Fox News meteorologist who lost both her Mother-In-Law and Father-in-Law, had the perfect response to Cuomo’s Wednesday interview as she tweeted out the video.

New York Governor Andrew Cuomo has either lost his ability to make rational statements or has moved to Egypt and is living in a state of de-Nile. He didn’t purposely try to kill eleven thousand old people. He made a lousy decision.  It is a long past time for Andrew Cuomo to “Man-Up” and take responsibility for his wrong decision.