New Black Panther Case May Be Heating Up Again

Just when you think that the Justice Department is going to avoid any impartial investigation over the alleged racial discrimination that came out of the New Black Panther case, it starts to heat up again. We last heard about the New Black Panther case in late September when Christopher Coates, became the second former member of the Justice Department’s Voting rights division to claim an institutional department bias against protecting the rights of Caucasian Americans. 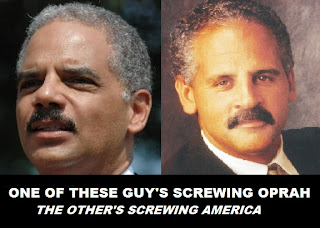 Coates, former chief of the Justice Department’s Voting Section, and still a DOJ employee defied his bosses orders by testifying before the U.S. Commission on Civil Rights to discuss the reasons why the New Black Panther Voter intimidation case (NBPP) was dropped even though the Judge had ruled that the DOJ had already won the case.

Coates’ testimony was a shocking indictment of rampant racism against Caucasians in the Obama administrations Department of Justice. His testimony accused the administration of using race to determine which cases are prosecuted. Corroborating the testimony of J. Christian Adams, Coates testimony illustrates that the issue goes way beyond the New Black Panther case, the real issue is the organization charged with protecting civil rights is now a tool for increasing discrimination in the country.

Today AG Holder testified in front of the Commerce, Justice, Science, and Related Agencies Subcommittee of the House Appropriations Committee and much of the discussion centered around the New Black Panther decision and the allegations of racial bias

Committee Chairman Wolf’s first question surrounded FOIA requests made by J. Christian Adams (the initial whistle-blower) to get documented corroboration of his testimony  .

“According to documents I have obtained, FOIA requests from liberals or politically connected civil rights groups are often given same day turn-around by the DOJ,” Adams wrote. “But requests from conservatives or Republicans face long delays, if they are fulfilled at all.”

Holder tap-danced around the charge, saying that more complex FOIA requests “take more time, requests that are relatively simple in nature can be answered faster.” See it would be all OK if those right-wingers stopped making those complected requests like, Hey can we have the truth?

“I’m not sure what research Mr. Adams has done. I’ve looked into the issues that were in this, I guess, blog or article that he wrote. To the best I can determine, there is no ideological component with regard to the response times that the Justice Department makes to these requests,” Holder said. “But I can assure you that there is no ideological component to how we answer the requests.”

The hearings had two unusual events. Congressman John Culberson of Texas requested a House investigation of the New Black Panther incident, and at the very end of the hearing Congressman Wolf asked to speak to the AG privately, saying that he had new evidence that would incriminate the DOJ regarding the bias in his department.

I have spoken to the offices of both congressmen, they promise to update me later today or tomorrow.  Stay tuned to this site for those updates.