Never Trust an Islamist–Here’s the Proof

I make it a practice NEVER to trust anybody who does not like dogs, especially puppies. Here’s the proof why people should never trust an Islamist, at least those in Tayside Scotland.

A postcard featuring a cute puppy sitting in a policeman’s hat advertising a Scottish police force’s new telephone number has sparked outrage from Muslims.
Tayside Police’s new non-emergency phone number has prompted complaints from members of the Islamic community. The choice of image on the Tayside Police cards – a black dog sitting in a police officer’s hat – has now been raised with Chief Constable John Vine.

ITS A FREAKING 6-WEEK-OLD PUPPY. LOOK AT THAT PUPPY FACE ! This is Creeping Shariah going way too far. Read the rest of this story…its a doggone shame !!: 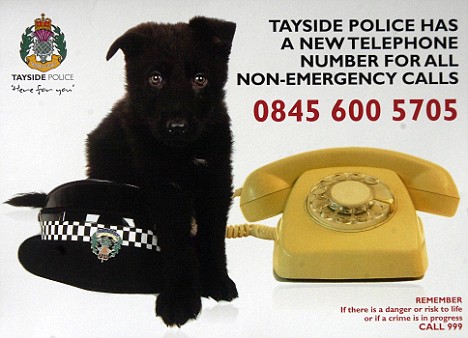 Tayside Police caused uproar in the Muslim community after they released this advertisement featuring police puppy Rebel sitting in a hat The advert has upset Muslims because dogs are considered ritually unclean and has sparked such anger that some shopkeepers in Dundee have refused to display the advert.Dundee councillor Mohammed Asif said: ‘My concern was that it’s not welcomed by all communities, with the dog on the cards.
‘It was probably a waste of resources going to these communities.
‘They (the police) should have understood. Since then, the police have explained that it was an oversight on their part, and that if they’d seen it was going to cause upset they wouldn’t have done it.’
Councillor Asif, who is a member of the Tayside Joint Police Board, said that the force had a diversity adviser and was generally very aware of such issues.He raised the matter with Mr Vine at a meeting of the board.

The chief constable said he was unaware of the concerns and that the force had not sought to cause any upset but added he would look into the matter.
Councillor Asif said: ‘People who have shops just won’t put up the postcard. But the police have said to me that it was simply an oversight and they did not seek to offend or upset.’Cards featuring police dog-in-training Rebel have been distributed to communities throughout the area to advertise the single number point of contact for non-emergency calls to the police.Rebel has proved a popular recruit for Tayside Police after coming through the very first Lothian and Borders Police dog-breeding programme in February.
One of seven German Shepherd pups born in early December, he has now completed his course of inoculations, and is free to venture out onto the streets of Tayside.A spokesman for Tayside Police said: ‘Trainee police dog Rebel has proved extremely popular with children and adults since being introduced to the public, aged six weeks old, as Tayside Police’s newest canine recruit.’His incredible world-wide popularity – he has attracted record visitor numbers to our website – led us to believe Rebel could play a starring role in the promotion of our non-emergency number.’We did not seek advice from the force’s diversity adviser prior to publishing and distributing the postcards. That was an oversight and we apologise for any offence caused.’

Rubio Slams Biden and Demings in Critical Review
The Floridian