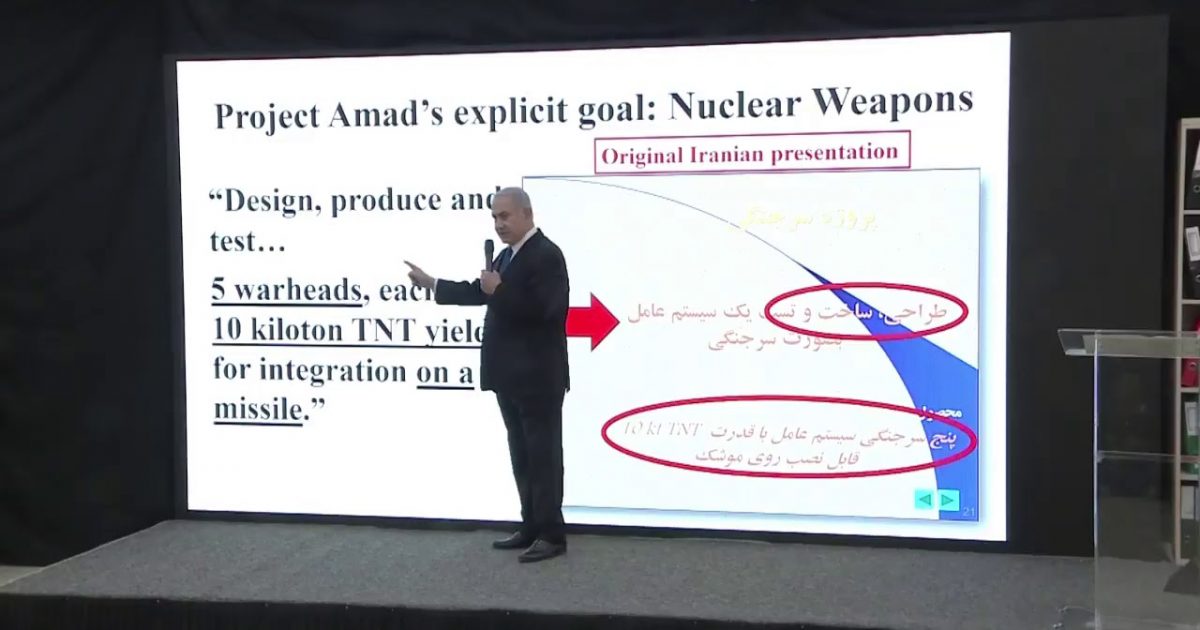 Using information secretly gathered from Iran and verified by the United States, Israeli Prime Minister Binyamin Netanyahu exposed a major lie in the information the Iranians supplied to the International Atomic Energy Agency (IAEA). That data was a requirement before implementing the JCPOA. In other words, the entire agreement was based on a lie and should never have been implemented.

The PM revealed a cache of files that prove Tehran ran a secret program to build nuclear weapons. Iranian leaders have long said their nuclear program is only for peaceful purposes. But Netanyahu revealed tens of thousands of pages of documents, which he said were copied from a “highly secret location” in Iran.

Netanyahu said the information — which was obtained within sometime in February — shows Iran is “brazenly lying” about its nuclear weapons program and moved all of its nuclear files and designs to a secret location, proving the country is not complying with that key provision of the nuclear deal.

Netanyahu revealed that Israeli intelligence secured a half ton cache of files, fifty-five thousand pages and another 55,000 files on 183 CDs, from that secret storage building in Tehran.

According to that IAEA report, Iran said that it never had a nuclear weapons program. They specifically denied the existence of the Amad program.

After 2003, Iran officially shut down Project Amad but carried on its work secretly using the same personnel. The person who ran the Amad program, Dr. Mohsen Fakhrizadeh is now running a clandestine program “Special activities” whose work is carried out by SPND an organization inside Iran’s Defense Ministry. Many of SPND’s key personnel worked under Fakhrizadeh on Project Amad.

While it certainly seems that way, it is important to note that the Prime Minister did not offer conclusive proof that the SPND was working on a nuclear bomb

What he did prove is that Iran lied to the IAEA about their pre-deal program. Per the JCPOA, the agreement was not to be implemented without that information. But Iran’s lies mean the entire deal is based on falsehood and never should have been implemented

That storage building of files where Israeli intelligence took the information proves that after the deal was made, “Iran continued to preserve and expand its nuclear know-how for use at a later date.” But the JCPOA states, “Iran reaffirms that under no circumstances will Iran ever seek, develop or acquire any nuclear weapons,” so to be compliant they should have gotten rid of the files. But it seems that Iran is keeping the information for a rainy day.

Many have said that Bibi’s speech was directed at one person, President Trump–according to my sources in Jerusalem, this is not true. There were actually two targets.

The speech was directed at the American people to provide cover to the American president, who Netanyahu believes will pull out of the Iran deal on May 12 (they were quick to point out that the PM hasn’t been told by Trump what he has decided).

The second target was the Iran leadership, especially the military leaders.  Iran’s military sites in Syria were bombed on Sunday (probably by Israel but we have no confirmation ).  According to the source, Netanyahu’s calculation was that the public embarrassment of having a half ton of files taken by Mossad from their capital city right under their noses, along with the proof they broke the provision the entire JCPOA was based on–that had to be fulfilled before the deal was implemented, will lead to new pressure about Iran’s nuke program from the U.S. and others in the international community. The calculation was that the combination of the embarrassment and pressure about their nuclear program might deter a retaliatory strike by Iran. That strike may very well spiral into a larger war.

Like the Prime Minister, I believe the President will do the right thing. However, his belief about what is the right thing may be different than Netanyahu’s.  What is certain is that Trump’s decision regarding what to do will be made out of a love for America and a true sense of friendship with Israel. It will not be influenced by a hatred of the Jewish State as was the original JCPOA which was influenced by the hatred of Israel and the Jewish people like Trump’s predecessor.

Below is a copy of the powerpoint used by the Prime Minister for his presentation and a video of the entire speech.

A video of Netanyahu’s full speech (the English portion) follows:

Note for more about Iran’s violations of the nuclear deal please read: