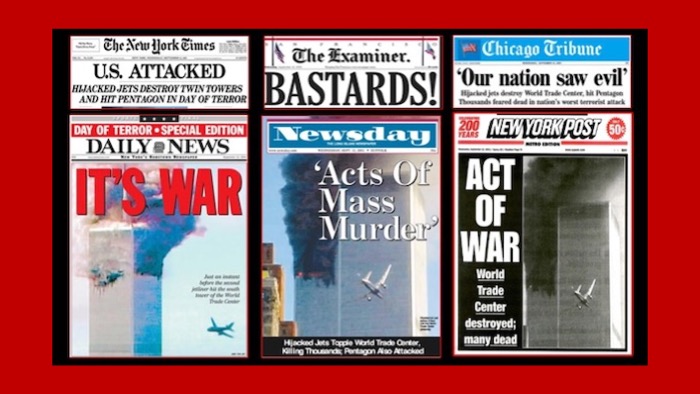 Attorneys of five 9-11 conspirators, including “mastermind” Khalid Sheik Mohammed, are negotiating with US Military prosecutors to take the death penalty off the table for the defendants. After nearly 3,000 people died, hundreds of others died from the toxic exposure at the World Trade Center and Pentagon–does that bring any kind of justice?

Mohammed reportedly came up with the plan to fly into the World Trade Towers and Pentagon. The other defendants are Ramzi Binalshibh, Mustafa Ahmed al-Hawsawi, Walid bin Attash, and Ammar al-Baluchi. They are looking to have the death penalty removed in exchange for guilty pleas and gain treatment for CIA torture during their incarceration at Guantanamo Bay.

Mohammed and his co-defendants are charged with crimes including terrorism, hijacking and 2,976 counts of murder for their alleged roles planning and providing logistical support to the Sept. 11 plot.

The trial for the five men has been bogged down in legal challenges for years. Prosecutors attempted to advance via pre-trial hearings in late 2021, but there remains no end in sight. Fox

The constant legal challenges have delayed any kind of justice since the men were incarcerated. Seven Military judges later, with three different attorneys given to each defendant, there is a giant black eye over the entire situation. Taxpayers are on the hook at $2.7 Million per day per defendant at Gitmo. It’s a travesty that it has taken this long just to get something to move forward. But taking the death penalty off the table? Isn’t that a travesty also?

“To see this headline on September 11 is appalling. Why is justice such an elusive concept in America today? Will the heinous among us never be held accountable? This is an outrage, and to read about it on this sacred day is an insult to the fallen.”

The question for the reader is, should we cave to the demands of 9-11 conspirators to get this case moving forward or say no, the death penalty is the correct outcome? It is up to Military judges to decide. For those who died in the attacks themselves, to those who died from cancers as they tried to rescue others and clean up the mess, we hope they make the right decision.