National Security Is Being Undermined Over Administration’s Order That All Soldiers Take A COVID Vaccine. 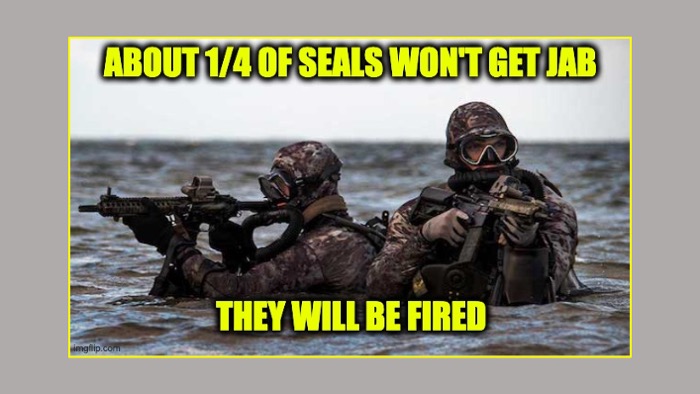 National security is being undermined over the administration’s order that all soldiers take a COVID vaccine as hundreds of Navy SEALs face being barred from service over the vax. Hundreds of SEALs (about a quarter of all the Seals in service) who have requested religious exemptions are still in limbo as the Pentagon has refused to inform them if they will be afforded a vax exemption as the deadline for the mandate looms.

Now, a lawyer counseling some of the SEALs says military readiness is threatened if the Pentagon continues to demand that all SEALs take the vaccine, according to JustTheNews.com.

“My clients include several Navy SEALs who are a small part of a large group of SEALs and other military members who are being asked to choose between their faith and their ability to serve our nation,” R. Davis Younts, a lieutenant colonel in the Air Force reserves and a JAG lawyer who is representing several of the special operators as a private lawyer, told JustTheNews. “They have been told that if they seek a religious accommodation, they likely will no longer be able to serve our country as Navy SEALs and been given an arbitrary deadline to comply with the vaccine mandate.

“My clients need time, and we are seeking at least a 90-day extension to vaccine mandate compliance deadline they have been given,” Younts added.

JustThe News added: “Younts said the Pentagon has put its threat in writing that unvaccinated SEALs, including those who get a religious exemption or already have natural immunity, will be forbidden from deploying with their teams, all but ending their special operator careers. Some were given a deadline of this week, he said.”

So, to satisfy their political COVID kabuki, Biden and his Democrat allies would instead put our military readiness in jeopardy than let their political agenda be set aside. Biden left $81+ billion worth of military equipment behind in Afghanistan, making one wonder if Biden cares about military preparedness anyway.