And They Made People Who Eat Peanut Butter Sandwiches Look Suspicious 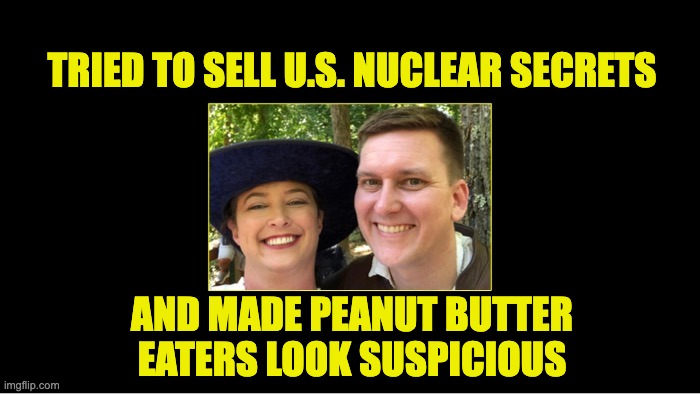 Sometimes the acts of people in the news hurt the people’s perceptions of everyday products and activities.  After the news about Bubba Clinton and Monica came out, I stopped asking friends to pick me up a good Cuban Cigar on their way back from Canada. For a while, after the  O.J. Simpson murder trial, I could play golf without people asking me if I was searching for the real killers, and the weak coverage of Joe Biden by the M.S.M. makes my stomach churn every time I look at ice cream.  Now a married couple who were arrested trying to sell America’s nuclear submarine secrets may have ruined peanut butter sandwiches, my favorite lunch.  Navy engineer sold American secrets

Jonathan Toebbe and his wife Diana are charged with attempting to sell U.S. submarine nuclear secrets to a foreign power. On Saturday, they were arrested by the F.B.I. and NCIS in West Virginia.  The couple lives in  Annapolis, MD, and are charged with violations of the Atomic Energy Act [42 U.S.C. § 2014(y) Communication of Restricted Data]. The full D.O.J. complaint can be read here. Jonathan Toebbe was a U.S. Navy nuclear engineer with access to restricted data. They are both set for their first appearance on Tuesday in Martinsburg, WV.

The letter in the first package sent to a foreign power (which was not named in the complaint) stated the following:

I apologize for this poor translation into your language. Please forward this letter to your military intelligence agency. I believe this information will be of great value to your nation. This is not a hoax.

Toebbe sounds like a Navy nuclear engineer who failed foreign languages in High School, has a greed problem, and isn’t very loyal to the country he swore to serve.

According to the complaint, he sent a package to a foreign government on April 1, 2020, listing a return address in Pittsburgh containing a sample of Restricted Data and an FBI official in the unnamed country obtained the package and began communicating with Toebbe.

On June 8, 2021, the undercover agent sent Toebbe $10,000 in cryptocurrency as a “good faith” payment, and Toebbe and his wife began traveling to locations in West Virginia and Pennsylvania where they left SD [Secure Digital] cards containing Restricted Data disguised in items including a peanut butter sandwich and a chewing gum package.

Now, just because they hid the restricted data in a peanut butter sandwich doesn’t mean that everyone who enjoys some crunchy Skippy between a few slices of bread is a spy.

These two people were not only disloyal to America, but they were not very smart spies. It was obviously illegal and harmful to the United States, but not having a clue who to send it to in the first place was asking for trouble. It is unclear how the F.B.I. agent got his hands on the package. Still, their methodology proves that Jonathan and Diana Toebbe must have flunked Espionage 101, even though they attempted to cover their tracks by using ProtonMail, an encrypted email service, and S.D. cards in various things such as a peanut butter sandwich.

Why did they pick peanut butter? People are now going to look at me funny if they see me eating lunch.  Why couldn’t they choose a ham and cheese sandwich? I don’t eat ham, nor do I eat meat with dairy.

According to some reports for a different S.D. card drop, they used a band-aid box. This makes sense because if they get convicted and sent to prison, they may end up with serious boo-boos.

Shortly afterward, on June 26, Jonathan and Diana Toebbe traveled to a location in West Virginia. There, with Diana Toebbe acting as a lookout, Jonathan Toebbe placed an SD card concealed within half a peanut butter sandwich at a pre-arranged “dead drop” location.

Oh, that clears things up. No self-respecting peanut butter eater will only have half of a sandwich.

After retrieving the SD card, the undercover agent sent Jonathan Toebbe a $20,000 cryptocurrency payment. In return, Jonathan Toebbe emailed the undercover agent a decryption key for the SD Card. A review of the SD card revealed that it contained Restricted Data related to submarine nuclear reactors. On Aug. 28, Jonathan Toebbe made another “dead drop” of an SD card in eastern Virginia, this time concealing the card in a chewing gum package. After making a payment to Toebbe of $70,000 in cryptocurrency, the FBI received a decryption key for the card. It, too, contained Restricted Data related to submarine nuclear reactors. The FBI arrested Jonathan and Diana Toebbe on Oct. 9, after he placed yet another SD card at a pre-arranged “dead drop” at a second location in West Virginia.

Jonathan Toebbe was an employee of the U.S. Navy and worked in the Naval Nuclear Propulsion Program. He held an active security clearance as a nuclear engineer. At one point, he suspected a trap, but instead of walking away, he continued to pursue the connection with the undercover agent. That confirms the point made earlier about failing Espionage 101 (but getting an A+ in Stupid 101)

According to the D.O.J. complaint, Jonathan Toebbe wrote

“I am sorry to be so stubborn and untrusting, but I can not agree to go to a location of your choosing. I must consider the possibility that l am communicating with an adversary who has intercepted my first message and is attempting to expose me.”

He should have listened to his gut instincts because Mr. and Mrs. Toebbe may wind up in jail for a long time. Their two kids will miss their parents.

Some of this post was first seen at Conservative Firing Line