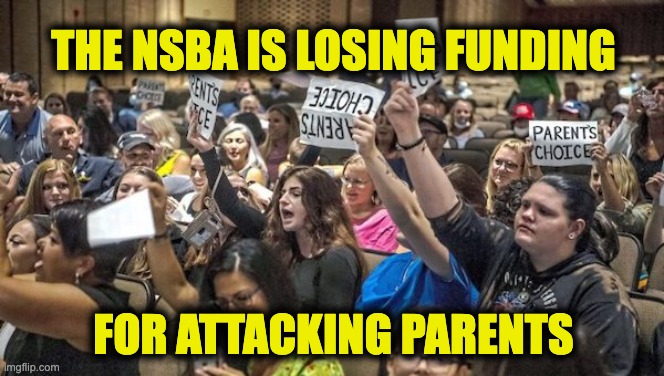 Earlier this year, the National School Boards Association (NSBA) was outed after colluding with the  DOJ, the FBI, and the Brandon administration to target Parents who dared to question the racist teachings of Critical Race Theory as they complained about the curriculum at various school board meetings.

The NSBA sent a letter to the Biden administration demanding that the FBI investigate all parents as domestic terrorists for daring to speak up against the extremist, anti-American, left-wing agenda being fed to kids everywhere. That letter led Attorney General Merrick Garland to send a memo directing the FBI and U.S. Attorneys’ Offices to investigate a “disturbing trend” of alleged harassment and threats to school boards, teachers, staff, and administrators. The trend was non-existent. It was a Biden Administration attempt to get parents to shut the heck up.

But in the wake of this treacherous act against trying to destroy the First Amendment freedom of parents and their responsibility to ensure the proper education of their children, one local school board after another resigned their membership on the NSBA. Its become so bad that the organization has lost a considerable chunk of its funding.

Per the left-wing site Axios: “The 17 state affiliates accounted for more than 40% of annual dues paid to NSBA by its state association members in 2019, according to Axios’ analysis of documents detailing those contributions.”

The 17 state school boards that quit the NSBA accounted for about $1.1 million of the organization’s yearly income. Per Axios, this means the group lost 42 percent of its income from state and local conferences and NSBA records presented during a recent meeting for the Florida School Board Association. The outlet projected that the loss of dues from the state group departures is only part of the story, as many invested other monies throughout the year for various NSBA initiatives, such as conferences.

But that isn’t the worst of the financial fallout. Axios also pointed out that aside from the annual dues, the quit state school boards also helped foot the bills for events, conferences, and other meetings. That money is now lost to the group.

The NSBA eventually tried to distance itself from its hateful attack on parents, but it appears that the letter was just the last straw for the organization. A number of the school boards apparently had already found reasons to exit the group, and the letter just sped them on.

So, states including Florida, North Carolina, Montana, and Pennsylvania have dumped the NSBA, proving that in the end, if freedom-loving Americans fight for their constitutional freedoms, it’s their freedom that will win out.

Much of this post was first seen on with Washington Exterminator