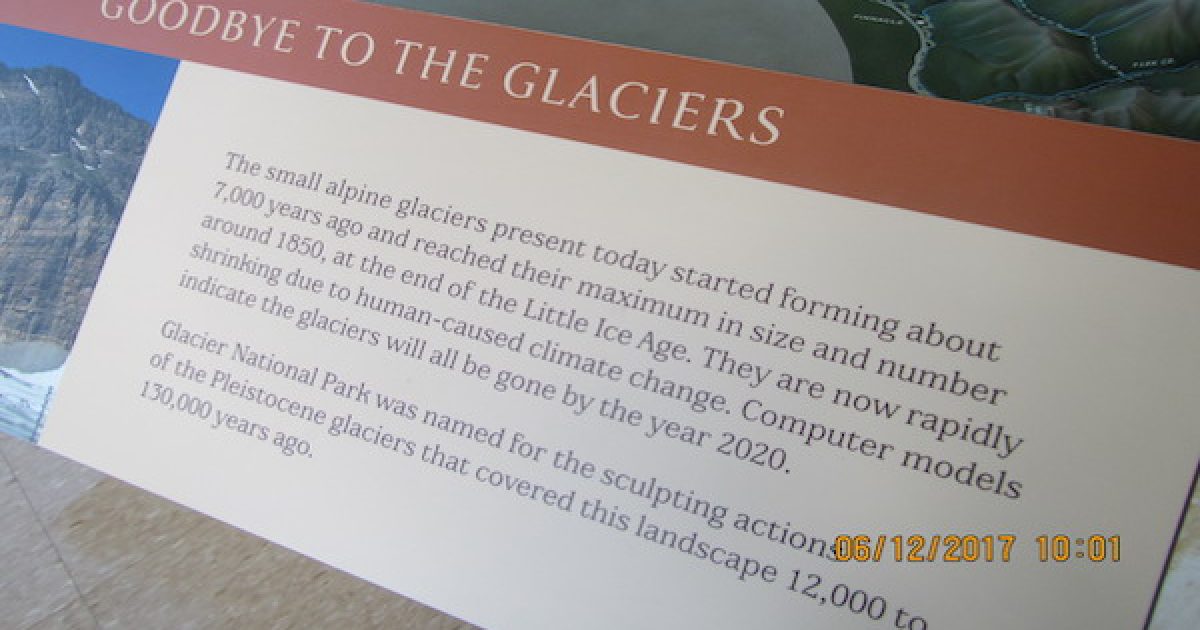 SHHHHHHHH!!!   The National Park Service has quietly removed all the signs put up by the Obama administration that told visitors that the glaciers would “all be gone” by the year 2020 due to global warming… because… it’s 2019, and the glaciers are all still there and have been growing.

Glacier National Park quietly removed a sign at its visitor center saying the glaciers will disappear by 2020 which were originally placed because former President Obama believed the predictions pushed by the left’s climate change hypothesis.

According to federal officials, several years in a row of high snowfall and cold temperatures totally obliterated a computer model that authorities relied on to claim that the glaciers would all be melted by 2020, Daily Caller reported.

“Glacier retreat in Glacier National Park speeds up and slows down with fluctuations in the local climate,” the U.S. Geological Survey (USGS) told The Daily Caller.

Despite reality making a joke of the former computer model that made such a foolish forecast, the signs still hold to the global warming theme. The segment that once said the glaciers would for sure be gone by 2020 now reads, “When they completely disappear, however, will depend on how and when we act.”

The USGS still insists, “The overall picture remains the same, however, and that picture is that the glaciers all continue to retreat.”

The signage alteration was first noticed by climate writer Roger Roots who wrote last week, “As recently as September 2018 the diorama displayed a sign saying GNP’s glaciers were expected to disappear completely by 2020. The ‘gone by 2020’ claims were repeated in the New York Times, National Geographic, and other international news sources.”

“Almost everywhere, the Park’s specific claims of impending glacier disappearance have been replaced with more nuanced messaging indicating that everyone agrees that the glaciers are melting,” Roots added.

Dr. Roots explains how the government skews the truth:

A major flaw in the government’s ‘before’ and ‘after’ approach is the omission of precise calendar dates. Every Montanan knows that mountain glaciers grow for 9 months of the year and then melt for 3 months. Thus a picture of a glacier taken in June or July will always show the glacier much larger than will a photo taken in early September. Comparing one year (“circa 1952”) to another year (“2005’) can be highly manipulative. Only a year-by-year, date-by-date comparison of photos taken at the end of the melt season (generally around the second week of September) will establish whether a glacier is growing or shrinking.

This year (2018) it quickly became clear that the glaciers have grown substantially in recent years. A startling example is seen at the Jackson Glacier overlook on the Going-to-the-Sun Road. The government has erected a sign with two photos: (1) the Glacier in 1911; and (2) the Glacier in 2009. The display shows the Jackson Glacier melting away to perhaps 10 or 20 percent of its 1911 size. But visitors to the marker in 2018 are able to look up above in the distance and see that the Jackson Glacier has grown significantly since 2009. The Glacier’s growth may be as much as 30 or more percent since 2009.

Since September 2015 Roots has offered to bet anyone $5,000 that GNP’s glaciers will still exist in 2030, in contradiction to the reported scientific consensus. To this date, no one has taken him up on the bet—I certainly won’t.

The total area of Glacier National Park covered in its iconic glaciers shrank 70% from the 1850s to 2015, according to USGS. Melting began at the end of the so-called Little Ice Age when scientists believe 146 glaciers covered the region, opposed to just 26 in 2019.

Glacial melting is nothing new, they have been receding before this country had a president and long before the global warming hypothesis became popular  Let’s go back in history…take a look at this news article from 1952 which talks about different glaciers, claiming the ones in Norway and Alaska had already lost half their size:

A look at the map below of Glacier Bay in Alaska, a popular site for Alaskan cruises, one can see where the glaciers are today vs. where they were at various points since back to about 1760 just before the American Revolution (and long before “climate change).”  Unless Gen. Washington led the revolutionary army in SUVs, there was no problem with greenhouse gasses back then.  In fact, if you look at the map, much of the melting took place before the 20th century.  Perhaps Barack Obama believed that when Secretary of State William Seward negotiated the purchase of Alaska from Russia in 1867, he put heaters inside the glaciers?

In March of 2019, we learned a key glacier in Greenland is growing again after shrinking for several years, according to NASA. I

“The Jakobshavn (pronounced YA-cob-shawv-en) glacier around 2012 was retreating about 1.8 miles (3 kilometers) and thinning nearly 130 feet (almost 40 meters) annually,” the Associated Press reported. “But it started growing again at about the same rate in the past two years, according to a study in Monday’s Nature Geoscience. Study authors and outside scientists think this is temporary.”

“That was kind of a surprise. We kind of got used to a runaway system,” said Geological Survey of Denmark and Greenland ice and climate scientist Jason Box, the AP noted. “The good news is that it’s a reminder that it’s not necessarily going that fast. But it is going.”

Box added, “arguably the most important Greenland glacier because it discharges the most ice in the northern hemisphere. For all of Greenland, it is king.”

Here’s the bottom line— some glaciers in the U.S. are growing others are shrinking. If however, they were shrinking because the global warming hypothesis was correct, they would all be shrinking, that shrinkage would have started long after the 18th century, and the entire Arctic ice would also be shrinking. Per data from the Danish Meteorological Institute (DMI), and reported by NoTricksZone, that’s not happening either:

And now that it’s June 1st, with the Arctic melt season starting in earnest, it is a good time to check Arctic ice volume. Here as well we find an equally surprising trend. Instead of shrinking rapidly — as is often claimed by the .global warming by alarmist scientists and the click-sleaze media — Arctic sea ice volume has not shrunk in 13 years!

And when we look at Arctic sea ice volume each year for June 1st this decade and plot it, we get the following: 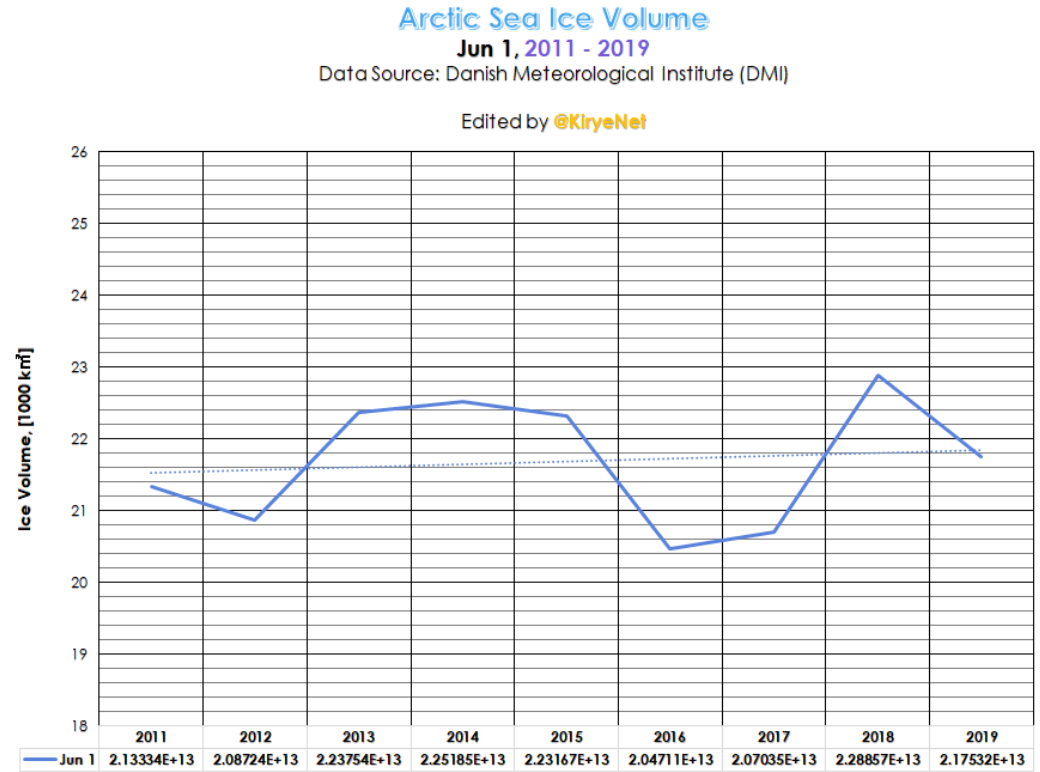 Lo and behold: the chart above shows that early June ice volume has trended up over the current decade.