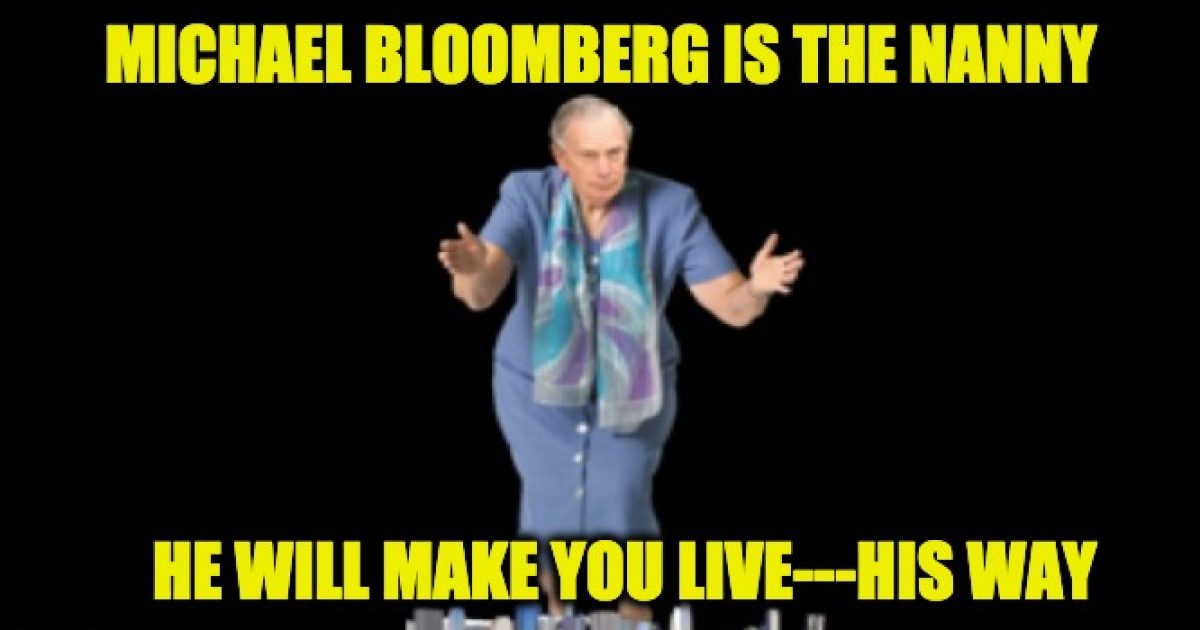 The big political news yesterday was former NYC Mayor Michael Bloomberg formally launching a campaign bid for the Democratic presidential nomination and initiating a $30 million television advertising campaign. Media reports call Bloomberg a policy moderate. He’s not. As mayor Bloomberg was a radical nanny-stater, he created regulations to control aspects of people’s lives from what they ate, to how they nursed their newborn babies, how they listened to music, and more.

He did get the city council to create a reasonable regulation, a two-term limit for NYC elected officials. But nanny-Bloomberg made one exception—himself.

Michael Bloomberg was not a nanny-stater like most Democrats are, he was much worse– as NYC Mayor Michael Bloomberg was a tyrant who thought he had the right to tell citizens how to live their lives. And he didn’t stop after he left office, Bloomberg has been trying to take away Americans’ right to bear arms.

Most know that Bloomberg is a radically anti-Second Amendment who has spent millions destroying gun rights. However, he has gone way beyond the pale.  Even the New York Times once wrote that Bloomberg’s gun control agenda went too far. In Washington State, Michael Bloomberg and some of his favorite anti-gun billionaires spent $4,661,572 for advertising that pushed through the anti-Second Amendment I-1639, despite overwhelming law enforcement opposition  His Everytown for Gun Safety group spent $2.5 million to help promote the Democrats into the majority in Virginia. Based on that new liberal majority left-wing Va. Gov. Northam told his cabinet that removing gun rights, including confiscating some people’s firearms, would be one of his first priorities.

But gun rights is the least of it. As a mayor, Bloomberg ran NYC like a police state. He banned just about everything except flatulence and oreo cookie ice cream.  Among the things he banned in NYC were:

Based on some of those rules, a kid’s party place in the city couldn’t serve the traditional pizza and large doses of sugared Coka Cola.

On his last day in office, I took the liberty of going to City Hall Park and feasting on a slice of pizza with extra cheese (trans-fats), sprinkling it with salt, and washing it down with a 24-ounce Big Gulp soda. Just to say goodbye.

Bloomberg isn’t inflexible about everything he changes party almost as often as he changes his underwear. He was a Democrat before seeking elective office, Bloomberg switched his party registration in 2001 to run for mayor as a Republican. He won his third term in 2009 as an independent and is now running for POTUS as a Democrat.

The thought of a Bloomberg presidency is frightening, if he could enact the above regulations as a mayor, just imagine (God-forbid) what he could do as the nanny of the free world.