Nancy Pelosi IS the Most Powerful Woman on Earth 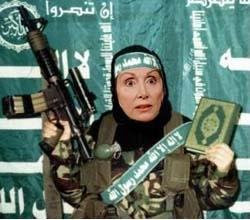 Ms Pelosi has groveled herself to Syrian President Bashar and fought against the war on terror with the help of her lapdogs Senator Reid and Congressman Murtha.

This week the Speaker has given her biggest present EVER to her al Qaeda friends. She blocked the bipartisan compromise on wiretapping the terrorists without a warrant. Wouldn’t even let it come to a vote (if she did it would have passed). With that one selfish political act she as put the United States deeper into danger. That my friends, is power–abuse of power, but power nevertheless.

Pelosi’s Wiretap Offensive
From Opinion Journal.For the next 9/11 Commission, we nominate the first witness: Silvestre Reyes, Chairman of the House Intelligence Committee. He’s the man now telling everyone to chill out, take it easy, there’s nothing to worry about, after his fellow Democrats last week scuttled a bipartisan compromise on warrantless wiretapping of al Qaeda. “It is an insult to the intelligence of the American people to say that we will be vulnerable unless we grant immunity for actions that happened years ago,” Mr. Reyes wrote in a letter to President Bush. By “actions” he means the cooperation with U.S. intelligence by private telecom companies after 9/11, for which the companies now face more than 40 lawsuits. Mr. Reyes’s letter is a political keeper — all the more so because it is so divorced from intelligence reality. Nearly every other professional says that Friday night’s expiration of the wiretap law will do significant security harm.

Intelligence-gathering has changed since the end of the Cold War. We live in a world of fiber optics and packet switching. The National Security Administration can’t get what it needs merely by scanning the airwaves for telephone calls and code words. Terrorists communicate through the Internet. To eavesdrop on those communications, the NSA needs the help of private companies, which voluntarily cooperated after 9/11 when Mr. Bush and the Attorney General asked them to do so. And what did they get for their trouble? As Mr. Rockefeller put it last week, “What is the big payoff for the telephone companies? They get paid a lot of money? No. They get paid nothing. What do they get for this? They get $40 billion worth of suits, grief, trashing, but they do it. But they don’t have to do it, because they do have shareholders to respond to, to answer to.” We’ve long held that a President doesn’t need a court order under the Constitution to order such wiretaps. But the reality is that, because of these lawsuits, the telephone companies now won’t cooperate without the legal protection of a court order. That’s how pernicious these lawsuits are. We asked one phone company executive what he’d do, after Friday’s expiration, in response to a government request for cooperation. His answer was blunt: “I’m not doing it. If I don’t have compulsion, I can’t get out of court [and those lawsuits]. . . . I’m not going to do something voluntarily.” Having talked to telecom executives, we can tell you this view is well-nigh universal. Mr. Reyes claims that existing wiretap orders can stay in place for a year. But that doesn’t account for new targets, which may require new kinds of telecom cooperation and thus a new court order. Mr. Reyes can make all the assertions he wants about immunity, but they are no defense against a lawsuit. For that matter, without a statute in place, even a renewed order by the Foreign Intelligence Surveillance Court is likely to be challenged as illegitimate. A telecom CEO who cooperates without a court order is all but guaranteed to get not merely a wiretap lawsuit, but also a shareholder suit for putting the company at legal risk.

Our guess is that Mr. Reyes knows all of this, but is trying to provide cover for Speaker Nancy Pelosi, who decided last week to block the bipartisan bill that had already passed the Senate 68-29. The bill also has majority backing in the House, with 21 Democrats having publicly pledged support and another 20 or so privately on board. Ms. Pelosi tried to dodge the issue by passing another short-term extension of wiretap authority, but opposition was so strong that the GOP defeated her on the House floor.

What we have here is a remarkable display of the anti-antiterror minority at work. Democrats could vote directly to restrict wiretapping by the executive branch, but they lack the votes. So instead they’re trying to do it through the backdoor by unleashing the trial bar to punish the telephone companies. Then if there is another terror attack, they’ll blame the phone companies for not cooperating. Mr. Bush has been doing his part in this debate, but his political capital is waning. The Republican who needs to make himself heard now is John McCain. The Arizona Senator is voting the right way, but he seems curiously disengaged from a debate that plays to his national security strengths. The time to speak up is before the next 9/11 Commission.