Democrats Got Nuffin’ but they Keep on Bluffin’ 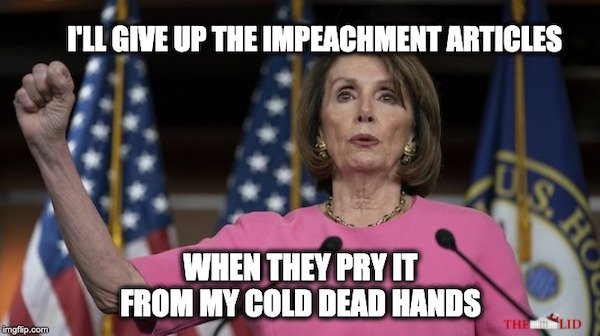 Door-To-Door Salesmen Sometimes Survive A Rough Job By Convincing Themselves That People Are Desperate To Buy What They’re Selling. Nancy Pelosi impeachment.

After receiving several “No’s”, they threaten to walk away when no one invited them to the door in the first place.

Such is the current situation in which Nancy Pelosi has put herself and the Democrat majority in the House. She continues to “threaten” to hold back the filing of two junk Articles of Impeachment the House rushed to pass before Christmas on the phony premise that Donald Trump is a threat to life as we know it. Actually, he continues to be a threat to life as they know it.

Pelosi pretends that the Republican-controlled Senate actually wants what she and the Democrats have been selling. Given her previous remarks not so long ago, we can do more than speculate that she didn’t want impeachment either.

Pelosi can’t afford to tell the truth. This is a continuation of the sham impeachment narrative itself which was designed to make it appear as though the Democrats have the upper hand. In fact, her sudden coyness about filing the Articles in the Senate shows that it was more of a Hail Mary Pass that she wishes she could recall. She knows the ball will be immediately intercepted by the Senate Republicans and Democrats will lose control of the narrative they’ve worked so hard to control until now.

In one of the most impressive speeches by an ordinarily not-very-impressive speaker, Senate Majority Leader, Mitch McConnell made it clear that a “radical faction” in the House Majority had gone off the rails. It was a stunning rebuke of Democrats in general and a civics lesson for the rest of us on the unique role of the Senate in the gravest of situations. It’s a speech I highly recommend watching and it’s embedded at the bottom of this post.

In light of that speech, it is chilling to consider what would happen if the Senate were controlled by Democrats as well. Does anyone think they would suddenly become circumspect about convicting and removing this duly-elected President on an evidence-free impeachment?

We Must Start Looking Soberly At The Democrats’ View Of America’s Prosperity And Success Not As Collateral Damage In Their Zeal To Remove This President, But As A Large Part Of Their Actual Motivation.

In preparation for Election 2020, Pelosi will settle for trying to hang the label of “Impeached President” on Trump.  They have terrible candidates, no message and rely only on victim and identity politics.  They desperately want power back but all they can promise is socialism and misery.  They used to be able to lie about that and get away with it. Call me skeptical, but I don’t think it’ll work this time.

Republicans must recognize that the longer Democrats keep talking impeachment, the more they lose and the more Republicans win. Few have the intestinal fortitude of a Donald Trump to take the hammering with the firm knowledge that they’re winning. Trump is extraordinarily adept at playing rope-a-dope and waiting out his opponents.

It’ll be grassroots conservatives that pick up the slack. They’re the ones that brought Trump to the dance, and they know that the Democrats have nothing but are still trying to bluff their way through to November 2020.

So, gird your loins, hitch up your britches, and forge ahead into 2020. It ought to be a wild ride.

Make sure to watch the video below.

Karen Kataline is a columnist and talk show host of Spouting Off, a live, internet, call-in show featuring politics, pop culture, and psychology. Her op-eds have appeared at Investor’s Business Journal, Town Hall, The Daily Caller, Western Journal, and The American Thinker. She is the author of Fatlash ! Food Police & Fear of Thin. This is a personal account of her own child beauty pageants, food restrictions, and her “stage door mother on steroids”.