What An A**! Nancy Pelosi Calls Immigration Officers ‘Cowards’ 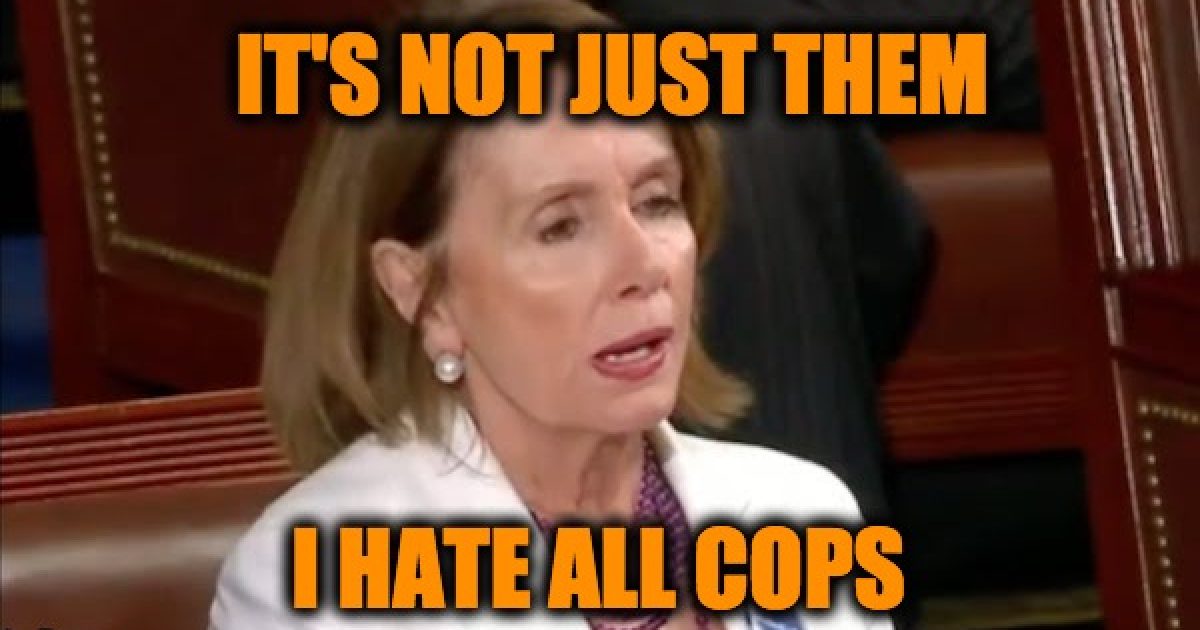 I don’t expect much from Democrat politicians. I generally think that Democrat political leaders only care about one thing, power. Which means that not much they say or do surprises me, even when it’s incredibly tone deaf or insane. However, the latest Democrat outburst is really one for the books. And of course, the foul mouth the outburst came out of, belonged to Nancy Pelosi (D-CA).

The House minority leader actually argued that the men and women who defend our nation and enforce our laws were acting “cowardly” by doing their jobs.

Nancy Pelosi  was speaking about a recent series of raids undertaken by our Immigration and Customs Enforcement (ICE) agents across the state of California, when she impugned the character of every employee in the agency, by calling the work that they do “cowardly.”

Fully half of those swept up in the ICE raids have no criminal record. Tearing parents away from children & spouses away from loved ones – it’s clear the intent of this sweep was not to keep Americans safe. Read my full statement: https://t.co/PpN1hZ226g

And here’s her full statement, where she attacks ICE simply because they are doing the job the American people hired them to do.

“The Trump Administration’s raids were a shocking abuse of law enforcement power.  Yet again, the White House has reached into our communities to indiscriminately detain scores of hard-working, law-abiding immigrants.

“Fully half of those swept up in the ICE raids have no criminal record.  This raid was intended solely to terrorize innocent immigrant families and instill fear in the hearts of our communities – not to keep Americans safe.  Parents will now be torn from their children, and spouses ripped away from their loved ones.

“The Administration continues to brazenly target the cities that refuse to bow to its blatantly bigoted anti-immigrant and mass deportation agenda.  The people of the San Francisco Bay Area will continue to oppose these cowardly attacks, and we will remain open to the patriotic immigrants who are the constant reinvigoration of America.

Pelosi feigns anger because “half” of the illegal immigrants that ICE arrested in their sweeps didn’t have a criminal record.

Let’s examine this ridiculous statement, shall we?

Then, Pelosi says that “half” of the illegals swept up in the raids had no criminal record. What does that mean? It means that half of the illegals who were picked up, DID have criminal records. HALF. She also argues that these raids were about terrorizing immigrant families and that they were blatantly bigoted.  However, again, half of the people arrested did have criminal records and the other half WERE illegal immigrants… so I’m not sure how this could be misconstrued as bigoted or not about law enforcement.

After that, she argues that the administration had targeted cities like San Francisco because they refused to “bow” to the Trump administration’s agenda. By refusing to “bow,” she actually means “refusing to obey or enforce our laws, and refusing to allow our federal authorities to do their jobs.”

Finally, Pelosi’s coup de grâce, she calls ICE’s decision to do its job “cowardly,” and then immediately calls the lawbreakers ICE arrests “patriotic immigrants.” This is a complete distortion of reality and it ignores the facts at hand. The people she calls “patriotic immigrants” are not citizens of our country, nor are they truly immigrants. They can’t be because they are not here legally and a large portion of these people are actually migrant workers and not immigrants at all.

But really… can you imagine the insanity that must be plaguing Nancy Pelosi’s mind, for her to call our patriotic law enforcement officers “cowardly,” while calling illegal immigrants “patriotic?” The woman has clearly gone insane.

I wasn’t the only American who was completely blown away by Pelosi’s comments, acting ICE Director Thomas Homan couldn’t believe what he heard either.

Homan continued his assault on California’s anti-law politicians during a phone call with various press outlets in which he laid out the facts of the ongoing dispute with California.

Homan underscored how ridiculous the assertion was that ICE was targeting non-criminal illegals in their raids.

“First of all, we don’t arrest innocent people — either they are here in violation of federal law, or they’ve had their due process, ordered removed, and they ignored a judge’s order. I want to remind everyone that the L.A. [enforcement] operation we did last month, 88 percent of everybody we arrested were convicted criminals. If you look at what we did in the state of California last year, 81 percent … were convicted criminals … How dare she say we are terrorizing immigrant communities!

Homan then pointed out the hypocrisy of these leftist legislators who spend their time deriding patriotic Americans. In particular, he reminded the media that Senator Dianne Feinstein (D-CA) actually voted for the laws that she was now attacking ICE for enforcing.

“First of all, we don’t arrest law-abiding people. We arrest people in the country illegally and in violation of federal law. Let me be clear. There is no [legal] prerequisite — they [don’t have] to commit another crime for us to enforce immigration law. That is what we do. That is what Congress has empowered us to do — enforcing immigration law. law. If people don’t like it, people like Nancy Pelosi and Dianne Feinstein can certainly change the law. They are legislators.”

California’s Governor, Jerry Brown (D-CA) didn’t escape Homan’s wrath either. Brown had argued that his state’s sanctuary laws didn’t protect criminals, but the ICE Director pointed out the obvious hypocrisy of the statement.

“If he (Brown) really believes that, we would have full access to his jails. They’ve locked [illegal immigrants] up, they’ve took their freedom away, they obviously are a threat to public safety, [so] give us access to those people.”

Thankfully, there are other Americans who are just as sick and tired of the leftwing Democrats and their hatred of our nation as I am.

Yet another MORON politician from California. We’re positively overflowing with them! ????ICE Director Fires Back at Nancy Pelosi: ‘How Dare You’ Call ICE Agents ‘Cowardly’ https://t.co/VJKokQXvGS

ADULTURESS Kamala Harris wants to abolish ICE border enforcement. She wants totally open borders. How is that not a recipe for disaster for the US and its legal citizens??? #VoteDemsOUT