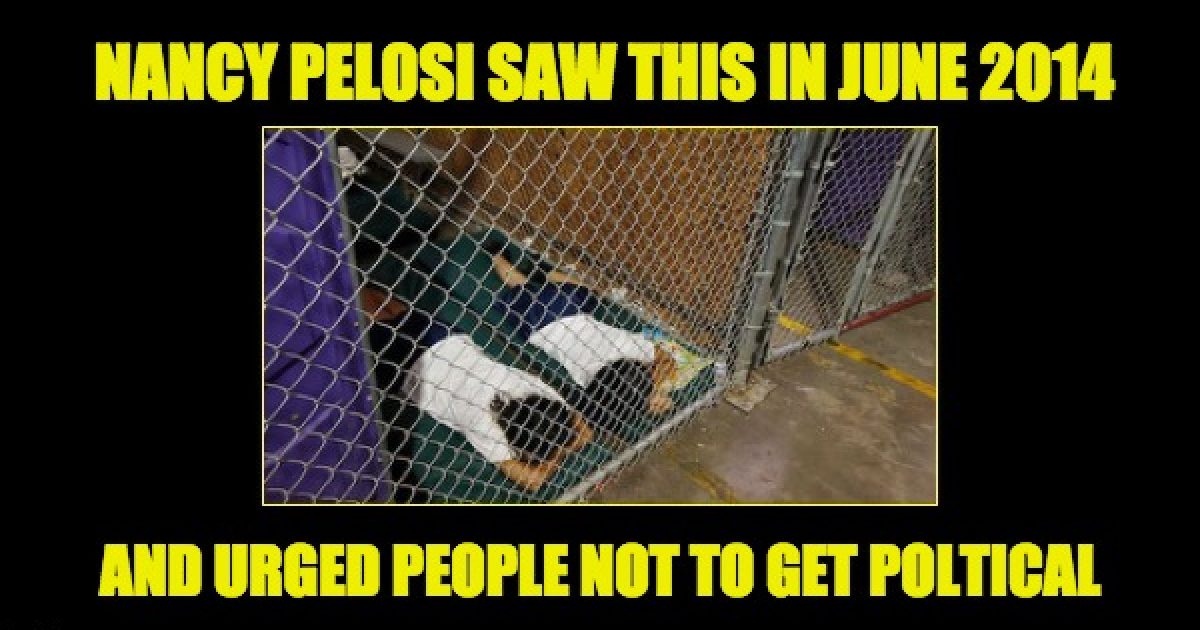 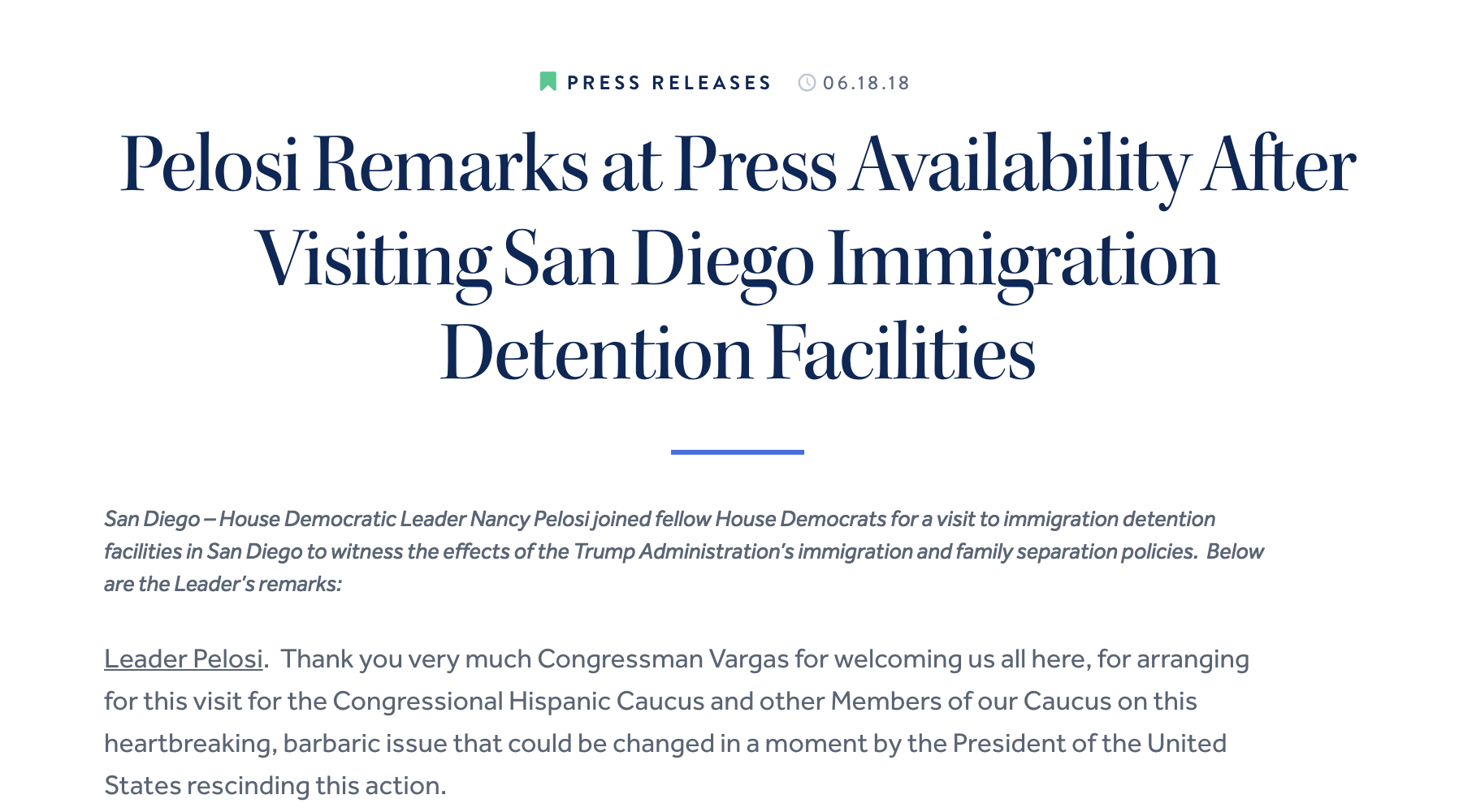 But in 2014  when Barack Obama was president, the United States was having a different crisis of children entering the country Illegally, and Nancy Pelosi visited a different detention center for kids and reminded America not to politicise the issue. “Well, I hope that while some may have tried to politicize it, I hope that was not the case.

An estimated 52,000 unaccompanied youths from Central America have been caught along the Southwest’s border with Mexico since October, almost double last year’s total. Of that, more than two-thirds made the crossing into the Rio Grande Valley near the southern tip of Texas,

And the above estimate didn’t include the children who crossed the border with their parents and were separated at the border.  According to illegal immigration rights attorney, R. Andrew Free, President Barack Obama explained to him at the time that children had to be separated from their parents to deter others from attempting illegally coming into the country.

8/ First, the President tacitly admittedly that he was using detention of mothers and children as a deterrent. Days later, a federal court would find that policy likely violates the due process clause. https://t.co/FxCyUqnWSW. And rightly so, as @ACLU powerfully demonstrated.

During that 2014 crises, House Minority Leader, Nancy Pelosi visited a detention center in Brownsville Texas and saw scenes like this (picture was taken two weeks before Pelosi’s visit): 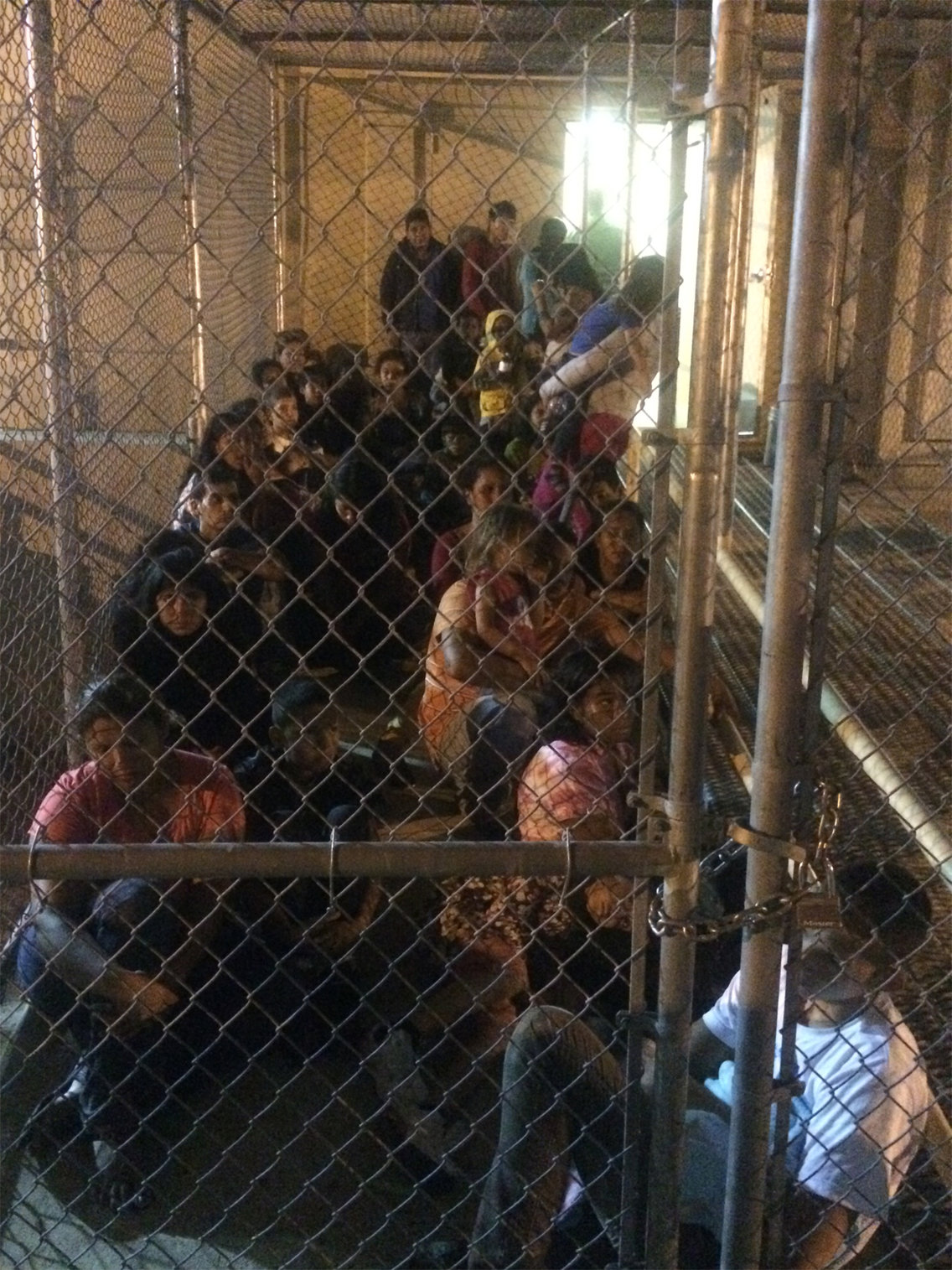 Her reaction in 2014 was much different.  Per her post-visit words included:

“What we just saw was so stunning.  If you believe, as we do, that every child, every person, has a spark of divinity in them and is therefore worthy of respect, what we saw in those rooms was dazzling – a sparkling array of God’s children, worthy of respect.  So we have to use, as was said this morning, the crisis that some view as a crisis – and it does have crisis qualities – as an opportunity to show who we are as Americans: that we do respect people for their dignity and their worth; that we know how to get the job done, that relates to, again stopping trafficking.  Because that’s one of the fundamentals that will reinforce the law.

What Pelosi didn’t mention is her belief that the spark of divinity was not in children still in their mom’s belly.  But she did mention that the kids had to start out in a detention center to eventually be moved (but not so fast)

“We have the law that established the Department of Homeland Security.  We have the Flores decision.  So the balance that we’re trying to create is to move these kids, these young people, these families as quickly as possible into another setting.  We have to do it in a way that meets certain standards – and not, in our rush, not do the best we can for them.

When asked, Pelosi said this is an issue beyond politics:

Well, I hope that while some may have tried to politicize it, I hope that was not the case.  And I think anyone who comes here knows that this is not about an issue, it’s about a value and it’s a value that we share, all Americans share; that we will show how strong we are to the rest of the world on how we deal with this humanitarian opportunity, or crisis, that we have.

(…)   We just have to strive for bipartisanship.  Just be calm; take a breath; let everybody have their say about how they want to characterize this, that and the other thing.  But after all is said, not done, but all is said, the fact is: these are children, children and families.  We have a moral responsibility to address this in a dignified way – I wouldn’t even say bipartisan, I would say nonpartisan way.  And that is what we’re striving to do.

While it is true Pelosi was visiting back then a detention center that is exactly the same as the one she visited last week. It is also true that children were being separated from their parents and placed in those detention centers. But there are two significant differences.

In 2018 the use of children’s’ detention centers has become an obsession with the mainstream media and senior Democrats are using it as a political wedge issue. According to Rep. Henry Cuellar (D-Tx), in 2014 “The Obama administration was trying to keep this quiet.” During Obama’s tenure in the Oval Office, the media covered for the president, so there was skewed coverage inciting a public outcry.

Perhaps the most significant difference motivating Pelosi to do a 180 on politicising the crisis is that President Trump is a Republican and former President Obama is a Democrat. Like her colleague on the Senate side, Pelosi doesn’t give a rat’s backside about the children or this country. Her party comes first, second, and third.

The below is a short clip of Pelosi’s comments after visiting a detention center in 2014: