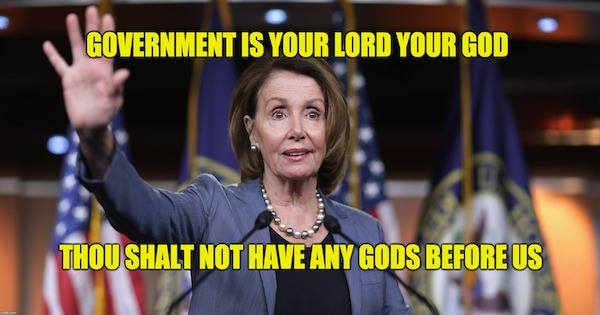 Appearing on MSNBC’s Morning Joe, Nancy Pelosi the House Minority leader had the audacity to claim that Democrats were “doing the Lord’s work” and Republicans were “dishonoring” God. The truth is that Nancy Pelosi wouldn’t know the Lord’s work if the holy one, Blessed be he, leapt high in the air, did a double reverse back flip, and while still floating in the air kissed her on the cheek.

Progressives such as Pelosi believe that people should look to government to define just exactly what is, or isn’t God’s work, because government is God.

“They pray in church on Sunday and they prey on people the rest of the week. And while we’re doing the Lord’s work, ministering to the needs of God’s creation, they are ignoring those needs which is to dishonor the God who made them.” Pelosi later added of Democrats that “we don’t wear religion on our sleeve, but maybe we should.”

On their face, Pelosi’s comments are disgusting and untrue. Today’s ultra-liberal Democratic Party is continually trying to get Americans to worship government instead of the “God of their choice.” Progressives believe that Government should replace God’s work.

The creation narrative in Genesis explains that man is created in God’s image.  But we also taught that our maker has no bodily form, so how can that be?  The Bible is not teaching us that we are all dead ringers for the “big guy upstairs,” if that was the case the pictures on everyone’s drivers licenses would look-alike, no one would be able to get a check cashed, and all of those TV shows about solving crimes would be very boring.

“Created in God’s image” is supposed to teach us that just as God acts as a free being, without prior restraint to do right and wrong, so does man. God does good deeds as a matter of his own free choice, and because we are created in his image so can man. For man to have true free choice, he must not only have inner free will, but must exist in an environment in which a choice between obedience and disobedience exists. Only through free choice, can man truly be, in the image of God. And only by choosing to do good, can man get closer to our maker.

When it comes right down to it, free will is the divine version of limited government. God picks  which is the correct direction and even gives us a guide-book in the Torah, but he does not pick winners and losers—it is up to each and every one of us to pick the direction we want to proceed.

When it comes right down to it, free will is the divine version of limited government. God picks the correct direction and even gives us a guide-book in our holy scriptures, but he does not pick winners and losers—it is up to each and every one of us to pick the direction we want to proceed. And when we pick the right direction our reward is the joy of feeling the presence of the lord in our hearts.

But Liberal/Progressives like Nancy Pelosi believe that government should take away the free choice given to us by God.  Their philosophy is that left to their own devices, mankind will do the wrong thing (or at least what progressives say is the wrong thing). They also believe it is government that defines what is good and what is bad.  Look at the Hobby Lobby or the Little Sisters of the Poor cases where the Obama administration tried to force groups whose faith opposed abortion to pay for insurance that includes covering abortion.

Finally, progressives like Nancy Pelosi government teaches citizens that the government will always bear the responsibility of protecting you; there is no individual responsibility to help the sick or poor, just the collective bailout. Instead of each one of us assuming a personal responsibility and using our good deeds to gain closeness to God, we become part of an overall group with no responsibility.