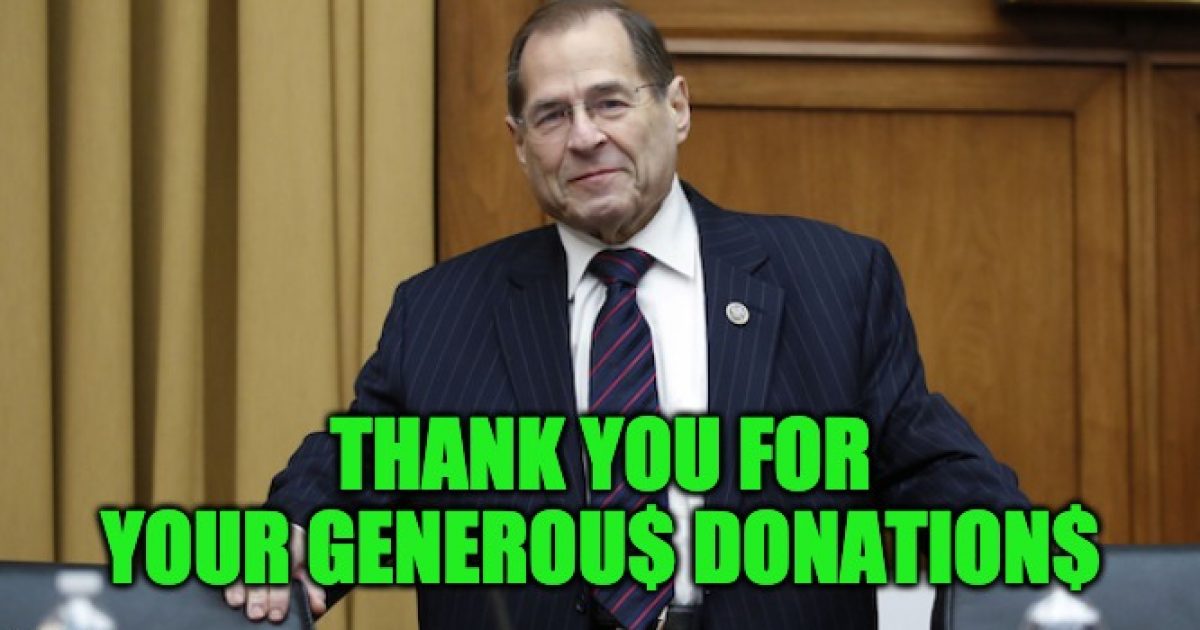 The man who has been spending much of the last two years trying to impeach President Trump should be examining his own conduct.  According to a report in the NY Daily News published six months ago Congressman Jerrold Nadler received at least $65,000 in campaign donations “from the music industry and other intellectual property businesses that he oversees as chairman of the House Judiciary Committee.” Apparently, no one in the MSM cares, even the Daily News avoided a follow-up. Nadler campaign donations

Nadler also spent about $30K to host a Grammy Awards gala in LA in February during the Grammy Awards, so he could hobnob with Music executives and probably beg them for campaign money.   Well, campaign money above and beyond the $5,000 a ticket they paid to go to the party he ran with fellow NY Democrat and Democratic chairman Hakeem Jeffries.

While none of this is illegal, it reeks of influence peddling. At TechDirt, they called it soft corruption. “These are the kinds of practices that are most likely legal, and possibly even common among the political class, but which absolutely stink of corruption to the average American. And that’s a huge problem, not just because of the general ethical questions raised by such soft corruption, but because it creates a cynical American public that does not trust politicians to adequately represent their interests.”

When asked about the Grammys

A spokeswoman for Nadler’s campaign insisted there was nothing improper in dropping $27,250 for a suite at the Staples Center where the Grammys are awarded, $2,290 for food and drinks, $1,835 at the Beverly Hills Hilton and another $2,650 at the Sheraton Grand, all so industry execs could fill Nadler’s campaign coffers and schmooze with the chairman.

“Congressman Nadler’s record speaks for itself — he has a long history of taking difficult, principled stands, fighting for good government and supporting legislation in the best interest of the his constituents and country,” said a statement provided by the campaign.

Principled stands?? Like selling out our Israeli allies with his support of the Iran deal advancing his position in the party? Pushing the Russia hoax to overturn the 2016 election, or supporting Ilhan Omar’s anti-Semitic comments by blaming them on “right-wing tactics aimed at advancing their agenda by distracting and dividing those committed to equality and social justice?”

Nadler wouldn’t know a principled stand if he saw one do a summersault, hop three times, and then kiss him on his lips.

Among the better-known donors listed in Nadler’s campaign filing are the “PACs of corporate heavyweights such as Sony, BMI, Universal, and Warner. There are also donations from lesser-known publishers and rights owners who represent some of the biggest acts in music history.”

Executives from independent shops including Gold Village Entertainment, Abkco Music and Records, Peermusic, and Concord Bicycle Music were among donors. Abkco owns the rights to most the The Rolling Stone’s greatest albums, as well as Sam Cooke, Chubby Checker and Marianne Faithfull. Gold Village has thrived in the more alternative spaces with The Hives, The Waterboys and guitarist Steve Earle. Concord Bicycle Music has rights to Paul McCartney, George Harrison, Creedence Clearwater Revival, Miles Davis and many more. Peermusic represents the writers of recent megabits like Katy Perry’s “Firework,” Rihanna’s “Umbrella” and Beyonce’s “Single Ladies (Put A Ring On It).”

“In a perfect world, members of Congress who serve on committees that oversee or regulate specific industries wouldn’t be able to fundraise or accept campaign contributions from those industries,” said Aaron Scherb, the director of legislative affairs at Common Cause.

Scherb added that participating in the imperfect system doesn’t mean that Nadler or other lawmakers are being bought off, but there’s a “perceived conflict of interest that’s created.”

“For many Americans, our corrosive fund-raising system calls into question whether members of Congress are acting in the public interest, or for some private financial interest,” Scherb said.

Nadler did nothing illegal, only immoral, and certainly sleazy.  I guarantee you that if President Trump had done something like Nadler has done with the music industry Nadler would hold another hearing, and the mainstream media would be having a feeding frenzy.