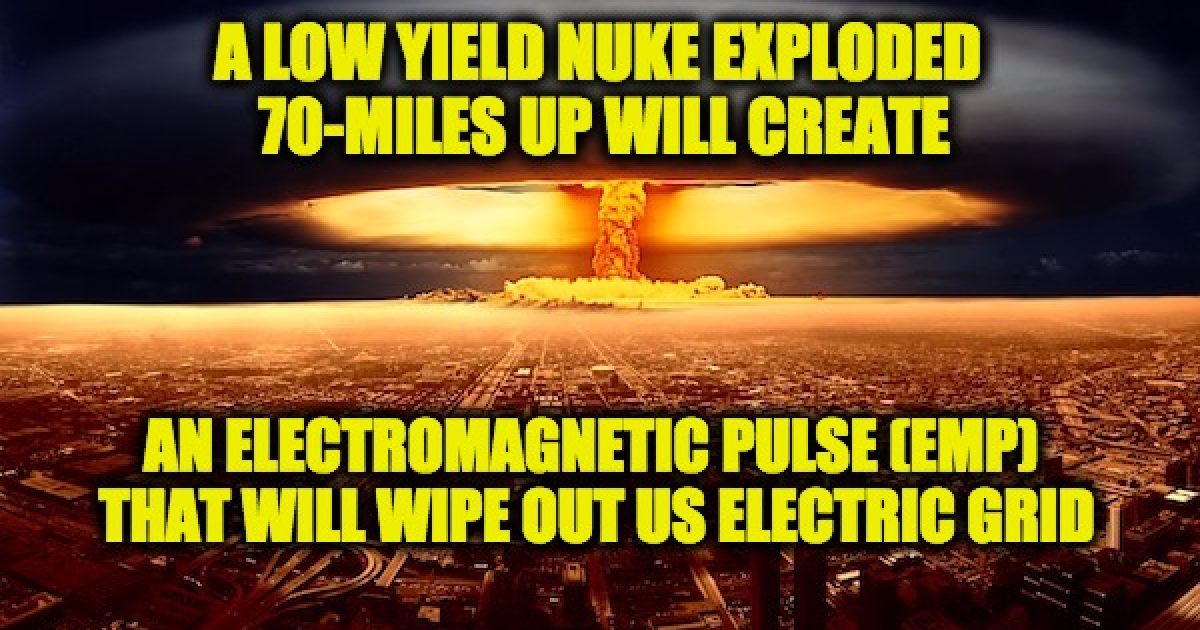 This weekend North Korea conducted its sixth nuclear test, they claimed that it was a Hydrogen bomb Although it hasn’t been confirmed that the test was a hydrogen bomb, the reports are this weapon has significantly more power than previous tests.

Making the test more concerning was the statement released by the state-run KCNA news service and not receiving much coverage in the MSM,   “The H-bomb, the explosive power of which is adjustable from tens kiloton to hundreds kiloton, is a multi-functional thermonuclear nuke with great destructive power which can be detonated even at high altitudes for super-powerful EMP attack(electromagnetic pulse) according to strategic goals.”

Much easier than spending a nuclear weapon to make a direct hit on the U.S. mainland, for an EMP attack all North Korea has to do is launch a low-yield nuclear missile from a submarine, ship, or by one of the ballistic missiles, they claim to be able to arm, and explode it at high altitude, above the atmosphere atop the U.S. mainland. This kind of attack would create a blackout of the Eastern grid that supplies 75% of power to the United States.

In May of this year, Aaron Klein of Breitbart interviewed Dr. Peter Vincent Pry executive director of the Task Force on National and Homeland Security and chief of staff of the Congressional EMP Commission.

“If you wanted to win a New Korean war,” added Pry, “one of the things you would certainly consider doing is taking out the United States homeland itself.”

Pry surmised the North Koreans may be taking the idea from a Soviet plan during the Cold War to attack the U.S. with an EMP as part of a larger surprise assault aimed at crippling the U.S. military.

“During the Cold War, the Russians had a secret weapon they called a fractional orbital bombardment system,” he explained. “And the idea was to do a surprise EMP attack against the United States by disguising a warhead as a satellite. Because a satellite trajectory is different from an ICBM trajectory that is aiming to go into a city. You know, for accuracy on an ICBM you launch it on a lower energy, 45-degree angle that follows a classic ballistic trajectory. Like a rifle. To land your missile on a city.”

And given this nation’s use of technology for communications, an EMP attack by a foreign power would devastate our military’s ability to coordinate defenses against an invading army.

A few days before his interview with Aaron Klein, Dr. Pry wrote an op-ed for Newsmax where he explained how North Korea could do the deed, and it doesn’t have to be a high yield nuclear weapon nor does it need to be a multi-stage rocket, and the targeting doesn’t have to be that exact.

I am looking at an unclassified U.S. Government chart that shows a 10-kiloton warhead (the power of the Hiroshima A-Bomb) detonated at an altitude of 70 kilometers will generate an EMP field inflicting upset and damage on unprotected electronics. …

On April 30, South Korean officials told The Korea Times and YTN TV that North Korea’s test of a medium-range missile on April 29 was not a failure, as widely reported in the world press, because it was deliberately detonated at 72 kilometers altitude. 72 kilometers is the optimum burst height for a 10-Kt warhead making an EMP attack. …

According to South Korean officials, “It’s believed the explosion was a test to develop a nuclear weapon different from existing ones.” Japan’s Tetsuro Kosaka writes in Nikkei, “Pyongyang could be saying, ‘We could launch an electromagnetic pulse (EMP) attack if things get really ugly.’”

If an EMP attack did take place, it would be beyond anything we have seen before. The Commission to Assess the Threat to the United States from Electromagnetic Pulse Attack estimates that within 12 months following a nationwide blackout, “up to 90% of the US population could perish from starvation, disease, and societal breakdown.”

Think about what’s going on right now in Texas because of the lack of electric power, or in 2012 on the east coast when Sandy blew out the electricity–now multiply the number of people affected to three-quarters of the country and the length of time to months or even years.

Newt Gingrich said in May,  “the grid disruption (and destruction) caused by an EMP could take months to years to repair. Non-perishable foods would spoil from lack of refrigeration. Hospitals would run out of life-saving, temperature-controlled medications within days. Dialysis and other medical devices would stop working. Water systems that rely on electricity would stop pumping water and pipes would burst from the weight and pressure. The cascade of consequences of a protracted regional power outage would be devastating.”

What he didn’t say is what will happen to “civilized society” when our basic survival instincts take over.

President Trump anticipated this threat and in early May announced:

“President Trump ordered the federal government to prepare for a devastating cyber attack against America’s electric grid amid growing fears foreign states are set to carry out attacks aimed at plunging the nation into darkness.

“An assessment of the danger must be carried out by the Energy Department, Homeland Security, DNI and state and local governments to examine the readiness of the United State to manage a shutdown of the power grid. The assessment will also identify gaps and shortcomings in efforts that would be used restore power.”

It sounds as if North Korea is a lot closer to disabling the U.S. electric, and it is no longer conjecture that an EMP attack is one of their strategic goals.