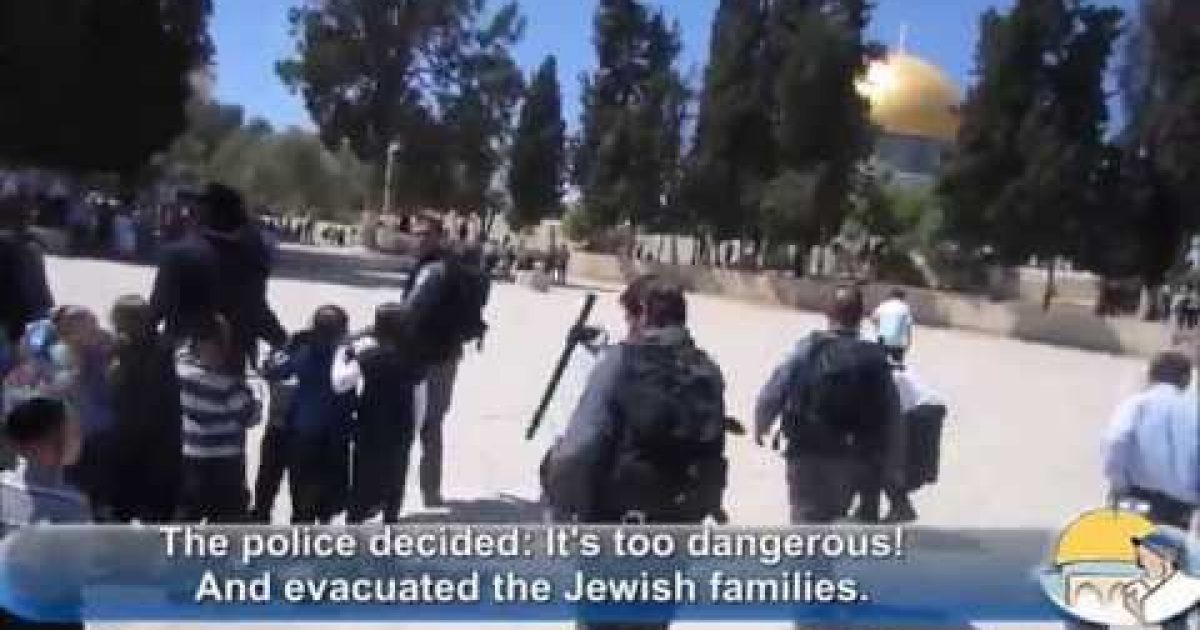 
As very young Jewish children walked across the Temple Mount on Tuesday (the day after Passover in Israel) Arab protesters yelled at, shoved, spit and threw objects at them and their chaperones. When several of the young children began crying, one of the adults in the Jewish group was heard on the video reassuring them in Hebrew, “Don’t be afraid. There are lots of police here.”

Eyewitnesses who were with the Jewish group told The Blaze Thursday that one young Jewish boy’s payis (sidelocks) were pulled, a Jewish man was hit in the head with a shoe, and that pieces of a broken chair were thrown at them.

Israel police spokesman Micky Rosenfeld said there has been an uptick in Arab disturbances on the Temple Mount over the past two weeks – coinciding with the major Jewish holiday of Passover – that included the throwing of stones, blocks and Molotov cocktails at Israeli police and visitors

“There has been an increase in Arab violence both against tourists and Israelis visiting the Temple Mount,” Rosenfeld said, adding that as a result, the holy site was closed to visitors a number of times.

Yisrael Fertig, who regularly accompanies Jewish groups to the Temple Mount, told TheBlaze he has been to the holy site dozens of times, but that his visit on Tuesday was the first time he was targeted in such a manner.

They were spitting at us. The police didn’t realize what was happening. The Arabs began coming near us … shouting at us, threatening they would throw things at us. Then they threw shoes. One guy got a shoe on his hat,” Fertig, who captured the incident on video, told TheBlaze in a telephone interview. “There were hundreds of Arabs (shouting) ‘Leave, get out of here!

Fertig saw Arab protesters lifting up chairs as if they were going to throw them, but were stopped by police. Instead, Fertig and another eyewitness said that they threw pieces of a broken chair at the group.

Fertig told TheBlaze that three of the children in the group saw a 5-year-old boy’s religious sidelocks pulled by one of the Arab protesters.

Shimshon Elbom, who accompanies Jewish groups on visits to the Temple Mount, said one of the men in his group was slapped.“Groups [of Arabs] were there just waiting for Jews to come up and harass them. People were simply sitting there waiting,” he said.

This Koranic passage appears to show that the holiness of Jerusalem is a Jewish concept, and should not be confused with an Islamic concept. The 13th-century Arab biographer and geographer Yakut noted: “Mecca is holy to Muslims, and Jerusalem to the Jews.

Between 1948 and 1967 when the IDF Jews recaptured the Mount, Jews weren’t allowed near the site. After 1967, when Israel recaptured the holy site (and Moshe Dayan took it upon himself to return it to the Muslim Waqf) Jews were allowed to visit the outside retaining wall of the mount (also known as the Western Wall). They are allowed on top of the Temple Mount as long as they don’t try to pray, bow their heads, kneel or do anything that may be interpreted as prayer. Christians are also banned from prayer. The only religious group permitted to pray at the site are Muslims. Israeli police enforces that rule.

The Israeli police protect the area from the “horrors” of non-Muslim prayer, both the press and the UN give credence to the Muslim/Palestinian claim that Israel is trying to desecrate THEIR holy site

There is the story of an American couple honeymooning in Jerusalem. They had and a chance encounter with Yitzhak Aharonovich, Israel’s public security minister. Aharonovichr asked them if they are enjoying their trip. They respond that it is wonderful, but the only thing missing was they had always wanted to visit the Temple Mount. Being a nice guy Aharonovich said he could arrange it for them. The groom tells the public security minister that he understands there are things the couple would not be allowed to do on top of the Temple Mount. After reminding Aharonovich they are newlyweds the groom asks if it would be OK if they stole a quick kiss while no one was looking. “Of course” said Yitzhak. “What if it was a long kiss?” he asked. “Well you are newlyweds,” said the public security minister” “What if we no longer could control our passion, ripped off each others cloths and made mad passionate love—right there in front of everyone?,” asked the groom. “I supposed that would be OK, you are married,” replied Aharonovich.

The groom asked another question, “What if we were overwhelmed with ecstasy we screamed out at the top of our lungs OH GOD, OH GOD!”

“ARE YOU CRAZY?” the shocked Aharonovich asked, “THAT COULD LEAD TO PRAYER!

There is no indication that the visitors attacked by the Muslims atop the Temple Mount on Tuesday committed the sin of prayer.