Despot Robert Mugabe Is Dead, His Reign Of Terror Was Created By Jimmy Carter 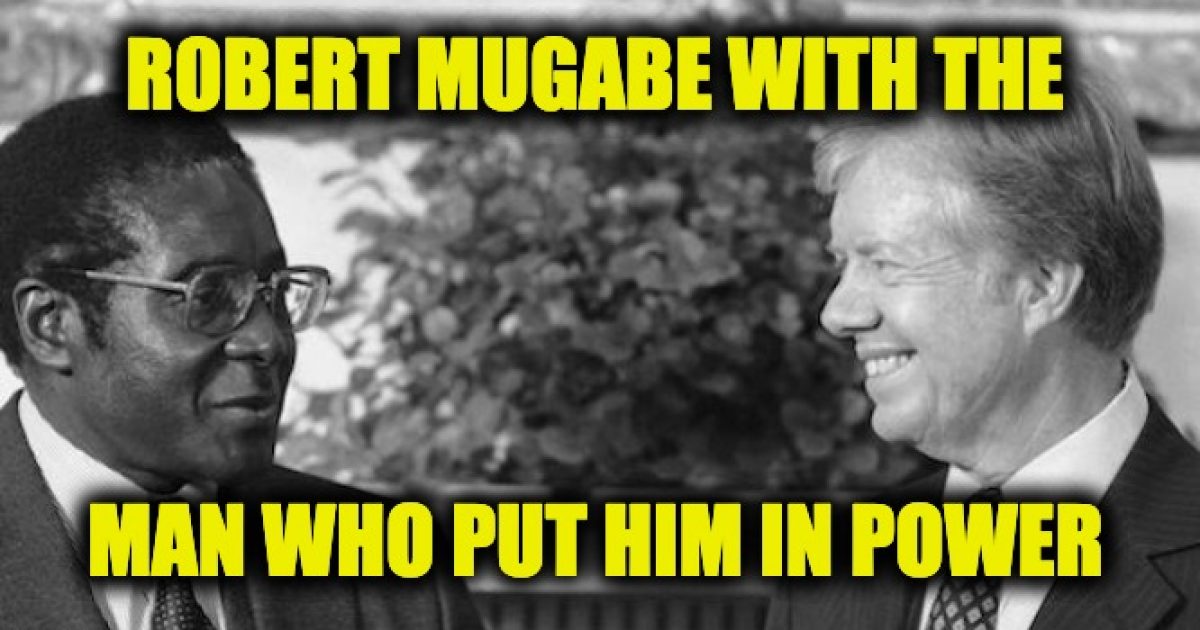 Zimbabwe’s ousted despot, Robert Mugabe is dead at age 95. He died in Singapore hospital nearly two years after being forced to resign following 37 years in power.   Mugabe was a horrible man who killed his own people. The worst example was the Gukurahundi killings. Tens of thousands of ethnic Ndebeles, an opposition tribe, were killed. Many of their bodies were found in mass graves that the victims had to dig themselves.

Mugabe’s savage rule over Zimbabwe was dominated by murder, bloodshed, torture, persecution of political opponents, intimidation, and vote-rigging on a grand scale, rape of political opponents, confiscation of farms owned by Caucasians (which helped to destroy the economy) and persecution of Homosexuals—but few recall that it was American President Jimmy Carter who put him in office.

I fought as an enemy, today you have become a friend. If yesterday you hated me, today you cannot avoid the love that binds you to me, and me to you.”

With those words, Robert Mugabe sought to reassure white and black alike on the eve of his swearing-in as prime minister of the newly independent and internationally recognized state of Zimbabwe 39 years ago. The new nation replaced Rhodesia, a former colony of Great Britain whose independence was never accepted because the country was unfairly ruled by a white minority.

In 1978 Ian Smith, the prime minister of white-ruled Rhodesia, reached an agreement with moderate black leaders for a transition government. Under this plan, termed the “internal settlement,” whites, which represented about 4% of the population, would be reserved 28 out of 100 parliamentary seats as well as control over specific government ministries. Still grossly unfair but certainly a strong movement toward change as the country elected its first
Black Prime Minister, Bishop Abel Muzorewa. Well, he was the PM until Jimmy Carter got involved.

In April of 1979, the first fully democratic election in Zimbabwe history’s occurred. Of the eligible black voters, 64% participated, braving the threat of terrorist attacks by Mr. Mugabe’s Zimbabwe African National Union-Patriotic Front party, which managed to kill 10 people. Prior to the election, Mr. Mugabe had issued a death list with 50 individuals he named as “traitors, fellow-travelers, and puppets of the Ian Smith regime, opportunistic running-dogs and other capitalist vultures.”Nevertheless, Bishop Abel Muzorewa of the United Methodist Church emerged victorious and became prime minister of Zimbabwe-Rhodesia, as the new country was called.

But Jimmy Carter didn’t like Bishop Muzorewa and because Mugabe’s party was not included in the election (it was his choice he preferred to continue fighting against the government) the peanut POTUS refused to recognize the new government.

[Jimmy Carter’s UN Ambassador Andrew] Mr.Young referred to Mr. Muzorewa, one of the very few democratically elected leaders on the African continent, as the head of a “neo-fascist” government. Mr. Carter refused to meet Mr. Muzorewa when the newly elected leader visited Washington to seek support from our country, nor did he lift sanctions that America had placed on Rhodesia as punishment for the colony’s unilateral declaration of independence from the British Empire in 1965.

Mugabe wanted the government to himself, he told everyone who would listen that he would turn the country into a single party, Marxist state. The Carter administration knew this but refused to admit it in public. In public, he said that Mugabe was just the sweetest of guys. But American pressure eventually forced Muzorewa to call for new elections in which the despot Mugabe was elected

In 1978, Ambassador Andrew Young described Robert Mugabe in an interview with the Times of London.

“Does Mr. Mugabe strike you as a violent man?” the Times reporter asked. “Not at all, he’s a very gentle man,” Young replied. “In fact, one of the ironies of the whole struggle is that I can’t imagine Joshua Nkomo, or Robert Mugabe, ever pulling the trigger on a gun to kill anyone. I doubt that they ever have.”

Yeah, he was a real sweetheart.

Andrew Young knew better. During the 1970s, as Mugabe competed with his sometime ally and former mentor Joshua Nkomo for primacy in the “liberation” movement in Rhodesia, he proudly identified himself as a Maoist and proved himself one of the most ruthless terrorist leaders. His Chinese-sponsored ZANU-PF guerrillas, operating out of the neighboring communist regimes in Mozambique, Zambia, and Angola, terrorized black villages and tortured and killed opponents.

Robert Mugabe’s iron-fisted rule has subjected Zimbabwe to a reign of terror directed toward all of his people, both white and black.  Not long after taking power in 1980, he began his reign of terror by killing about 20,000 people belonging to a minority tribe, the Ndebele.  Mugabe has been killing people ever since, perhaps as a tribute to Jimmy Carter:

In 2005, Mugabe ordered a raid conducted on what the government termed “illegal shelters” in Harare, resulting in 10,000 urban poor being left homeless from “Operation Drive Out the Rubbish.” The authorities themselves had moved the poor inhabitants to the area in 1992, telling them not to build permanent homes and that their new homes were temporary, leading the inhabitants to create their own temporary shelters out of cardboard and wood. The UK’s Telegraph noted that Mugabe’s “latest palace,” in the style of a pagoda, was located a mile from the destroyed shelters. The UN released a report stating that the actions of Mugabe resulted in the loss of home or livelihood for more than 700,000 Zimbabweans and negatively affected 2.4 million more. (Source: Moore, Charles (6 March 2005).”Mugabe’s raids leave townships in tatters”.

Veteran human rights activist and author Judith Todd, daughter of former South Rhodesia prime minister Garfield Todd, said in an interview that she was raped by a Zimbabwean army officer after criticizing President Robert Mugabe’s regime. Speaking to the Daily Telegraph from South Africa — she now lives in Cape Town — Todd said the assault occurred the day after she told the then army commander and another senior officer that an army brigade was killing civilians in Matabeleland, southern Zimbabwe.”It was rape. I was in a complete state of terror,” she told the newspaper, following the publication of her memoir, “Through the Darkness: A Life in Zimbabwe” in which she named the man.

In the rape camps of Zimbabwe, young girls are horrifically abused—often to punish Mugabe’s political opponents. . . . Mugabe has stationed two officers from his feared Central Intelligence Organisation in every village; merely talking to a murungu, or white man, can lead to interrogation or beatings. Christina Lamb, Sunday Telegraph, London, August 25, 2002

He enjoyed being compared to Hitler. When someone made the comparison, due to his alleged racist attitudes towards white people, Mugabe responded, ‘I am still the Hitler of the time. This Hitler has only one objective, justice for his own people, sovereignty for his people, recognition of the independence of his people, and their right to their resources. If that is Hitler, then let me be a Hitler tenfold.’

At another time he bragged about the violence of his regime, saying that he had “a degree in violence.”

After 37 years of tyranny, the people of Zimbabwe have had enough, and Robert Mugabe was ousted. And now he’s met his maker and is being judged for his life of violence

But it should be forever recorded in history that Mugabe’s reign of terror, along with Islamist Iran, and the creation of the Taliban and al Qaeda are the real legacy of James Earl Carter-the peanut president.