Mufti of Gaza On Palestinian TV, ‘How To Beat Your Wife Without Alarming Police’ 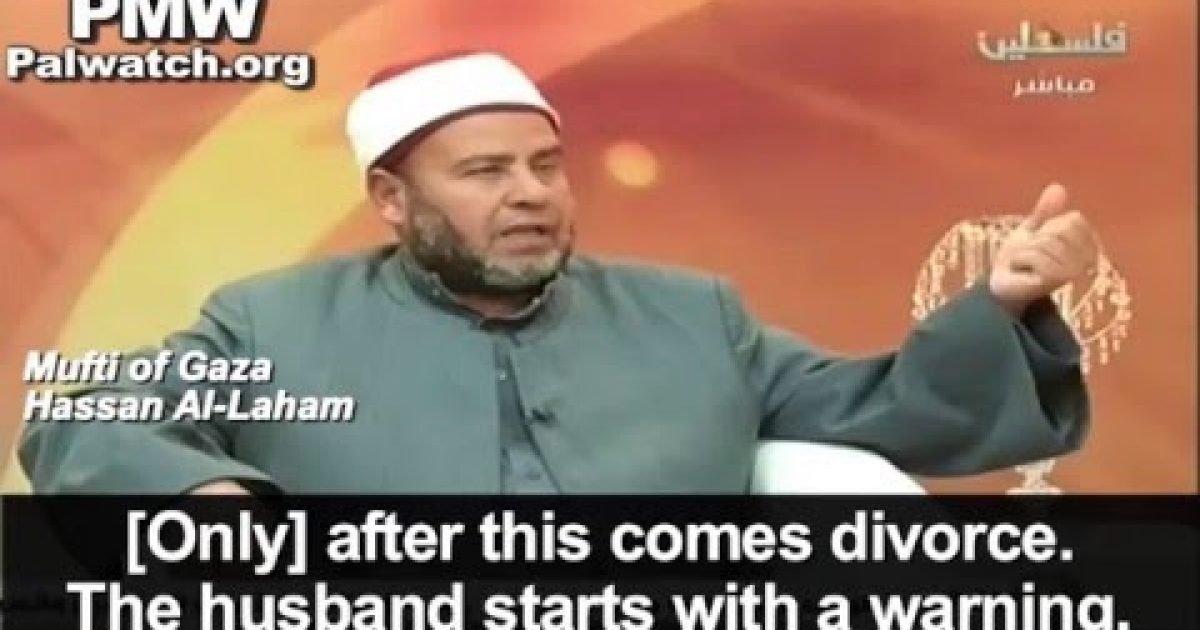 This is what educational TV is like on the official Palestinian Authority Television channel.  Below is an interview with Mufti of Gaza, Hassan Al-Laham. According to the Mufti after a warning or two Allah wants you to hit your wife…”not hitting that will bring the police, and break her hand and cause bleeding, or hitting that makes the face ugly.”

Gee those people in the religion of peace sure know how to handle a woman.  Read the transcript and watch the video below from Palwatch.

Mufti of Gaza Hassan Al-Laham: “Allah created a solution for this (i.e., marital strife). How? Allah said: Warn them [the wives], and separate from them, and hit them, and bring an arbitrator from his family and an arbitrator from her family. [Only] after this comes divorce. The husband starts with a warning.”

PA TV host: “Explain to our viewers the steps a husband should take.”

PA TV host: “In order to stop the conflict from getting worse and resolve it.”

Mufti of Gaza Hassan Al-Laham: “It is a warning. When she makes a mistake he will explain: ‘You shouldn’t do this and that.'”

PA TV host:“What is the stage after the warning, honored Sheikh?”

Mufti of Gaza Hassan Al-Laham: “‘[Quran:] Warn them [the wives] and separate from them.’ The separation means separation in the bedroom, in the home. Not outside. In other words, he will not show other people that there is a problem. But inside the home, at bedtime, if he separates from her and does not speak to her in the bedroom, she will ask why, and he will explain: ‘You made a mistake and I am angry about it.’ Perhaps this will lead to reconciliation… After the warning and separation, comes the hitting – hitting that does not make her ugly. The Prophet [Muhammad] said: ‘Do not hit the face and do not make her ugly.’ (Hadith) In other words, not hitting that will bring the police, and break her hand and cause bleeding, or hitting that makes the face ugly. No. As it is said [in a Hadith] ‘If not for this (i.e., the fear of retaliation), I would give you painful blows with a small brush.’ … The hitting is not meant to disfigure, harm, or degrade. The hitting will be like a joke. He will hit her jokingly. Not a blow that breaks a bone or makes the face ugly, and he will not curse and the like. This hitting is a kind of reminder that the love and friendship that Allah commanded, is still found between us (i.e., the couple).”