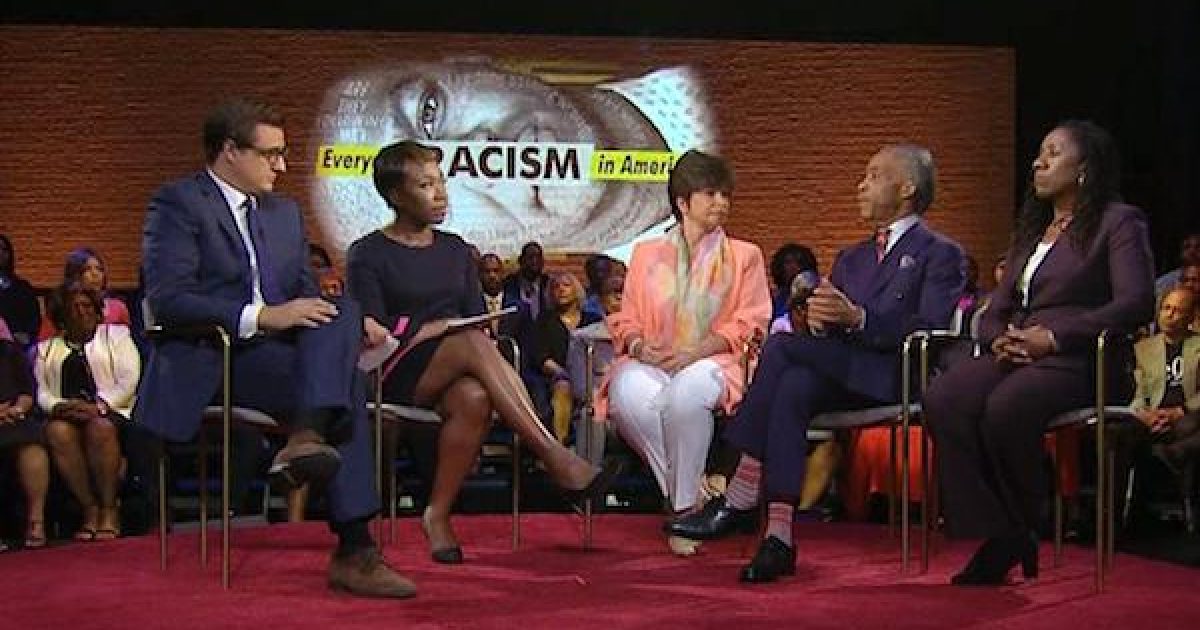 Rosanne Barr got what she deserved today. Her incredibly successful TV show was canceled because of an absolutely disgustingly racist tweet about former Obama staffer Valerie Jarrett.  In an entirely mendacious move, MSNBC interviewed Ms. Jarrett about Barr during a Tuesday evening special on racism. Talking to Jarrett wasn’t hypocritical, but who they had in attendance participating in the interview was. On one side of Ms, Jarrett was an anti-Semitic, anti-Hispanic homophobe and on her other side, a professional bigot.

.@ValerieJarrett responds to Roseanne Barr’s tweet, saying Disney’s chairman called her before announcing that ABC was canceling the show: “This should be a teaching moment.” #EverydayRacism pic.twitter.com/b0EvA8WAeY

On one side of Ms. Jarrett is the homophobic Joy Reid on the other is the professional bigot Al Sharpton who led two anti-Semitic pogroms in NY City.

Just a month ago on April 23 Mediaite, published a story revealing posts Joy Reid had written on her personal site. She had she erased the articles, but they were still available thanks to the Wayback Machine. The posts exposed were horribly homophobic. Some of the worst ones were summarized by the Intercept 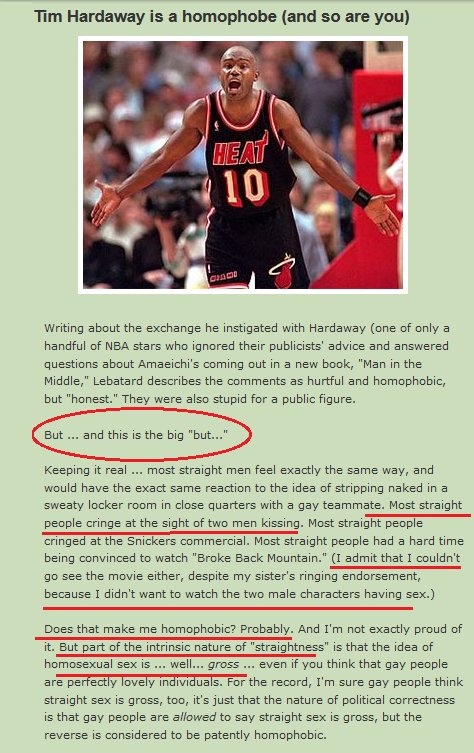 Also in her blog Joy Reid made it clear she is not a fan of Hispanics:

Mexican immigrants do not value American citizenship: An iSteve.com reader wrote that illegals don’t want to be citizens, but “Mexicans with benefits.” What do the data say? GSS respondents were asked how important is it to them to be an American citizen. Only one-third of Mexican immigrants said this was important. Almost twice as many immigrants from all the other countries felt this way (60%). Eighty percent of native-born Americans value their citizenship.

They don’t come here for freedom. If they did they’d want to become citizens. They come here to make more money.

Joy Reid doesn’t believe a Jew like Wolf Blitzer should report on the Middle East, as he is just a tool of the [Jewish ?]:

“lobby that holds the whip hand over Republican and Dmeocratic members of Congress alike, and whose role in a certain series of Iran-related spying cases raises troubling questions about whether foreign agents are operating inside the United States, with the purpose of screening American foreign policy in the Middle East for the government in Tel Aviv? (Or twisting it on Israel’s behalf…)”

If the Jews really controlled the government Joy Reid implied with that traditional anti-Semitic canard, would we have allowed an anti-Semite like Barack Obama to become president?

Blitzer’s behavior is not only anti-journalistic, it’s irresponsible and transparantly ideological. If he wants to do an editorial program promoting the interests of a foreign government (Israel,) he should petition his bosses at the network to do just that. Otherwise, if he is purporting to do “news,” he should stick to the news, and put aside his AIPAC flak jacket. (Syrian Ambassador Imad Moustapha didn’t fare much better with MSNBC’s resident twitterbug Norah “Giggles” O’Donnell, who even managed to characterize the U.S. veto of a U.N. resultuion condemning Israel’s use of excessive force in Gaza as a repudiation of criticism of Israel by the Security Council…)

In another post, Joy Reid agreed with former Iranian President Ahmadinejad’s description of Israel. BTW, Joy, his first name is Mahmoud. Ahmad was his father he was a barber (and the last name is spelled Ahmadinejad, not Amadinejad.

Wizbang makes this Ahmad Amadinejad zinger (I can finally write that without looking it up) their quote of the day (and their readers curiously vote for France…):

“You believe the Jews were oppressed, why should the Palestinian Muslims have to pay the price? You oppressed them, so give a part of Europe to the Zionist regime so they can establish any government they want. We would support it. So, Germany and Austria, come and give one, two or any number of your provinces to the Zionist regime so they can create a country there… and the problem will be solved at its root.”

I hate to admit that Mr. Amadinejad has a point

On the other side of Valerie Jarrett in the picture is Al Sharpton, professional bigot, and preacher who doesn’t believe in the Ninth Commandment (Don’t bear false witness). Along with his other faults, Sharpton is an anti-Semite.

For example, when NYC Jews complained about the Antisemitism of Black College professor Leonard Jeffries in 1991, Sharpton called them race baiters adding “If the Jews want to get it on, tell them to pin their yarmulkes back and come over to my house.” 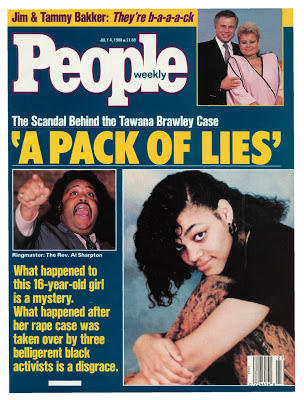 Sharpton refused to meet with NY Attorney General Robert Abrams during the Tawana Brawley hoax because (he claimed) meeting the Jewish Abrams would be “like asking someone who watched someone killed in the gas chamber to sit down with Mr. Hitler.”

Also during Sharpton’s the Tawana Brawley hoax he falsely accused of Steven Pagones former Assistant District Attorney in Duchess County of committing a crime he knew never happened. During a March 1988 news conference, Sharpton blamed Stephen Pagones for being one of Brawley’s rapists. He also accused district attorney William Grady of trying to cover up Pagones’ involvement in the crime, and demanded that Governor Mario Cuomo arrest the two “suspects.” When asked for evidence of his claims Sharpton insisted they would reveal the facts when the time was right. He never showed that evidence because there was no crime. Therefore there was no evidence.

Apparently, the “Reverend” Sharpton never heard of the 9th commandment, “Thou shalt not bear false witness against thy neighbor.”Sharpton breaks that false witness commandment pretty often. Perhaps he believes God was literal when he said: “against thy neighbor.” Maybe Sharpton believes it’s okay to make false charges against people who live outside his neighborhood.

In his op-ed Sharpton specifically mentioned that we put aside what did or didn’t happen during Crown Heights, the reason for that statement is he continues to lie about his incitement of the riot and he has never apologized.

Sharpton’s version of justice was waged against Yosef Lifsh, the driver of the car that tragically struck Gavin Cato in August 1991, giving the professional bigot an opportunity to incite the Crown Heights Riot. The preacher who doesn’t believe in the 9th commandment falsely claimed Lifsh was driving drunk that night, even though the police tested him and he was clean. Al Sharpton incited so much hate against Lifsh that he fled to Israel.

Per the sworn statement of  Efraim Lipkind, a former Hasidic resident of Crown Heights; on the second night of the riot, Haaretz’s “unifier” wasn’t calling for working with the Jews. According to Lipkind  “Then we had a famous man, Al Sharpton, who came down, and he said Tuesday night, kill the Jews, two times. I heard him, and he started to lead a charge across the street to Utica.”

Sharpton is also responsible for the deaths of Angelina Marrero, Cynthia Martinez, Luz Ramos, Mayra Rentas, Olga Garcia, Garnette Ramautar, Kareem Brunner. They are the seven victims of the massacre at Freddy’s Fashion Mart. They are lost their lives because of a four-month-long campaign of anti-Semitic hate by Al Sharpton, which incited a man to firebomb the Jewish-owned Freddy’s killing the seven innocents. 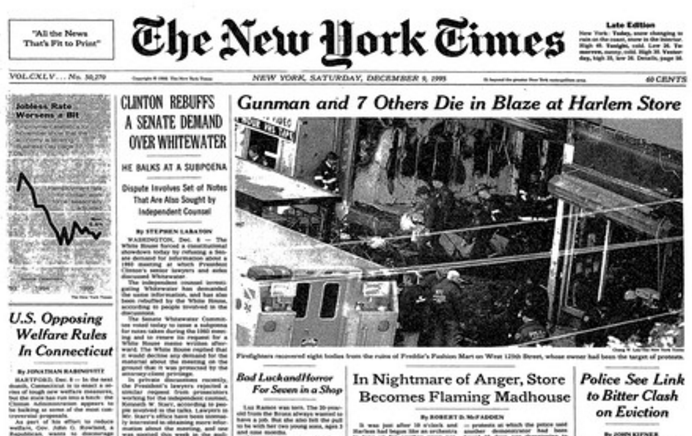 Remember the controversy surrounding the Duke lacrosse team? They were falsely accused of rape, and without any facts, the hater with the title of “Reverend” declared that these ”rich white boys” had attacked a ”black girl,” and warned that if arrests were not made immediately, there would be no peace. He further claimed, “this case parallels Abner Louima, who was raped and sodomized in a bathroom [by a New York City police officer] like this girl has alleged she was…. and just like in the Louima case, you have people here saying she fabricated it.”

When the truth came out, it was proven that the “rape victim”  had invented the story and she recanted— all charges against the lacrosse team were dropped. However, MSNBC’s Al Sharpton never retracted his slander of the lacrosse team.

Sharpton also has something in common with Joy Reid. In the video below we see him in the old Morton Downey Jr. show calling someone a “punk faggot.”

While it’s true that some of Sharpton’s bigotry occurred a long time ago, he never renounced or apologized for any of his hateful actions.And they certainly never concerned MSNBC, after all—they hired him. Joy Reid’s homophobia, as well as her anti-Semitic and anti-Hispanic musings didn’t seem to bother MSNBC either, as she is still infecting audiences with her hatred.

There is nothing wrong with MSNBC interviewing Valerie Jarrett or broadcasting a special on racism and bigotry. But any anti-racism message loses its power when it comes from haters like Joy Reid and Al Sharpton.  It is the equivalent of inviting former President Bubba Clinton to write to appear in a special about fidelity in marriage, or his wife Hillary for a special on protecting the nations’ secrets using email.  It’s just hypocritical.