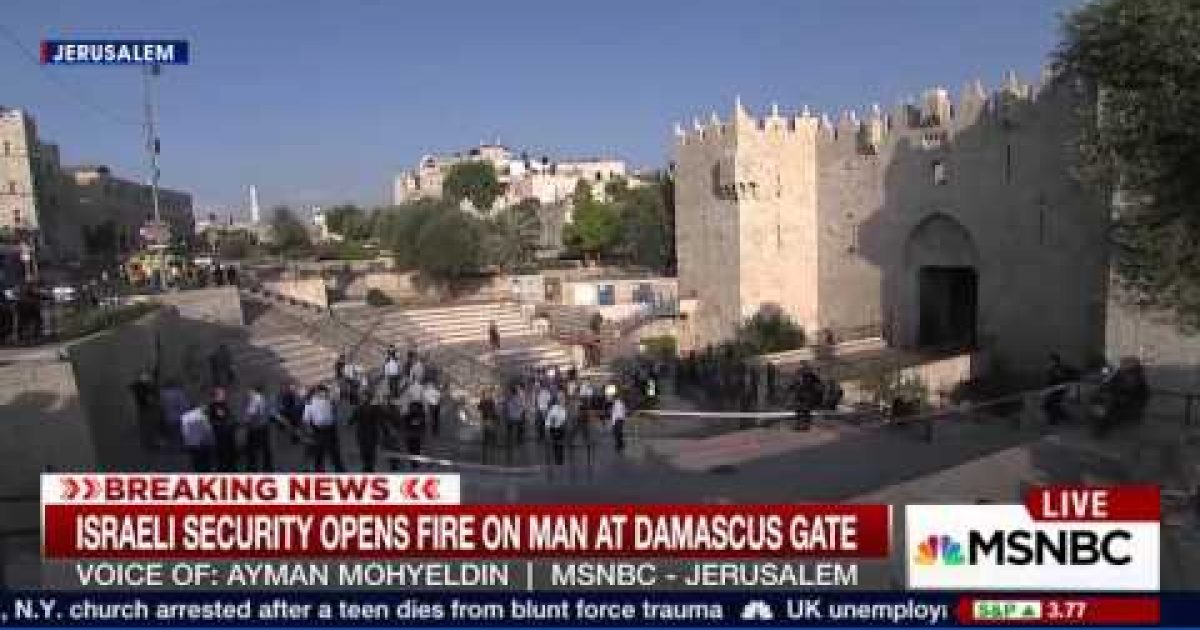 Just before 5PM Jerusalem time Wednesday, there was an incident near the Damascus Gate where a terrorist was shot and killed.  Appearing on the Jose’ Diaz Balart program immediately after the incident, Ayman Mohyeldin gave a false report, and was diplomatically corrected on air for his blatant lie.

The incident started at when police approached a man looking nervous at a checkpoint near the Damascus Gate Plaza. As officers approached the man (who was wearing military fatigues) he broke through the checkpoint line and  lunged at them with a knife. Then he ran toward another another police unit brandishing a knife, someone one of the cops yelled out, “He’s a terrorist,” before they fatally shot him.

When Mohyeldin initially gave the report, he left out the part about the fatigues, breaking through the line, and said that the Israeli police “said” he had a knife.

Diaz’ Balart gently reprimanded Mohyeldin saying that it was important to give context for the actions of both sides telling the audience that the terrorist had been wearing fatigues and broke through a police line.

Below is the first of two videos:

Mohyeldin reported for MSNBC during last year’s war against Hamas. At one point after filing a biased report about an attack on kids on a beach, he was called home.  But after a massive protest by progressives who preferred the anti-Israel reporting, he was sent back to make more biased reports, and  half-true statements.

Now that there is renewed Palestinian violence, Mohyeldin was sent back to the holy land to break the commandment about bearing false witness. He recently was awarded one of the Media Research Center’s DisHonors Awards for slandering war hero Chris Kyle.  It looks like he is trying to get another award next year.

Thankfully Jose’ Diaz Balart wasn’t having any of it. Watch the video below: