MSNBC ‘Historian’ Claims Free Press Would End, Our Children Will Be Killed If GOP Wins 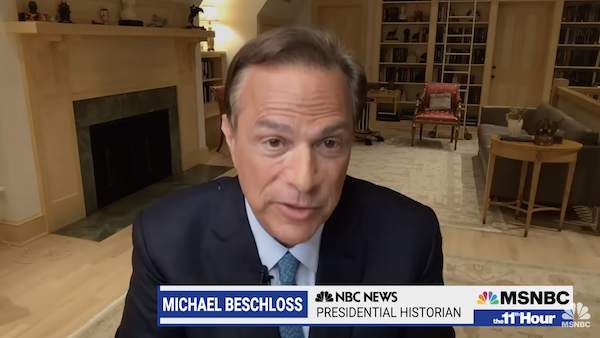 Have repeatedly referred to MSNBC as the official network of insane liberal rage, hate, and stupid, lying, liberal propaganda. And it seems the network lives up to that on pretty much a daily basis. On Wednesday, MSNBC presidential “historian” (and I use the term loosely) Michael Beschloss told propagandist Chris Hayes that our children would be arrested and killed if Republicans win the midterm elections next week.

He also falsely claimed that American “democracy” and the free press could end, and historians may no longer exist.

“A historian 50 years from now, if historians are allowed to write in this country and if there are still free publishing houses and a free press, which I’m not certain of,” Bechloss said. “But if that is true, a historian will say, what was at stake tonight and this week was whether we will be a democracy in the future, whether our children will be arrested and conceivably killed.”

“We’re on the edge of a brutal authoritarian system, and it could be a week away,” he added.

There was more of this insanity:

Well, [Biden] was absolutely candid and he was absolutely right, because, as you know, Chris, six nights from now, we could all be discussing violence all over this country. There are signs that that may happen. May God forbid. That losers will be declared winners by fraudulent election officers or secretary of state candidates or governors or state legislatures.

Not quite, Michael. On the evening of the election, after the GOP wins the house and maybe the senate, we will not get violent like the Dems did in 2016. Some are going to party all night. Others (like me), once all the house and senate races are known, I’m going to go to sleep with a smile on my face/

We could be six days away from losing our rule of law and losing a situation where we have elections that we all can rely on. You know, those are the foundation stones of a democracy.

So if Biden had gone on the air tonight and said, biggest thing we have to worry about is, you know, marginal tax rate or something like that. Well, it is important. But what significant presidents do — I think you will agree, we both we write history, you and I.

1940, Franklin Roosevelt didn’t say, you know, the biggest thing I’m worried about is farm policy. Farm policy was important to him, but what he did say was never before, since Jamestown and Plymouth Rock, has America been in such danger.

Joe Biden is saying the same thing tonight. And a historian 50 years from now, if historians are allowed to write in this country and if there are still free publishing houses and a free press, which I’m not certain of. But if that is true, a historian will say, what was at stake tonight and this week was the fact whether we will be a democracy in the future, whether our children will be arrested and conceivably killed. We’re on the edge of a brutal authoritarian system, and it could be a week away..

Here’s a video, if you can stomach it, courtesy of Real Clear Politics:

Michael Beschloss bills himself as a “presidential historian.” Indeed, he’s written several fine books about the American presidency and its challenges.

But as David Strom at Hot Air points out, Beschloss is more of a “history populizer.” That is to say, he eschews the more scholarly approach to writing history in favor of the narrative approach, adding interesting fact flakes and historical tidbits to liven up the copy.

As David notes, there’s nothing wrong with this. But somewhere along the way, Beschloss realized that a more partisan approach to his commentary would net him more fame and fortune than he could have ever imagined writing about long-dead white guys.

So Beschloss became a reliable hysteric on the network where hysterics congregate. Somehow, Beschloss wangled the designation “MSNBC Presidential Historian” to give him a patina of authority and the absolute freedom to use his history creds to trash Republicans.

Lately, though — like most leftists — Beschloss has sort of lost it. I mean, in his bid to top his “over-the-top” colleagues on MSNBC, he entered the fever swamps of fantasy and conspiracy.

Fantasy and conspiracy — that pretty much describes MSNBC. After all, this is the network that is home to the likes of race-baiters Joy Reid and Tiffany Cross, who, by the way, is reportedly on her way out:

Tiffany Cross, the eponymous provocateur who leads The Cross Connection, is out at MSNBC, Variety first reported. Variety reports that the network declined to renew her contract and “severed ties with her immediately.”

Cross was MSNBC’s preeminent race-baiter, a weekend version of Joy Reid who accused all who disagreed with her of being a racist while often engaging in racist remarks herself. She recently accused minority conservatives of being tokens and led a segment where she condemned “white-adjacent” Latinos.

Let’s face it. This is part of the left’s campaign of lies, propaganda, fake news, and smears. In short, it’s BS. There’s no other way to describe it. Sadly, there are enough low-information liberal voters who will consume and believe this steaming pile of feces without a second thought.

Let’s be clear. “Democracy” will be exemplary, provided Democrats can be kept from cheating. The Republic, however, may end if Republicans do NOT win next week.