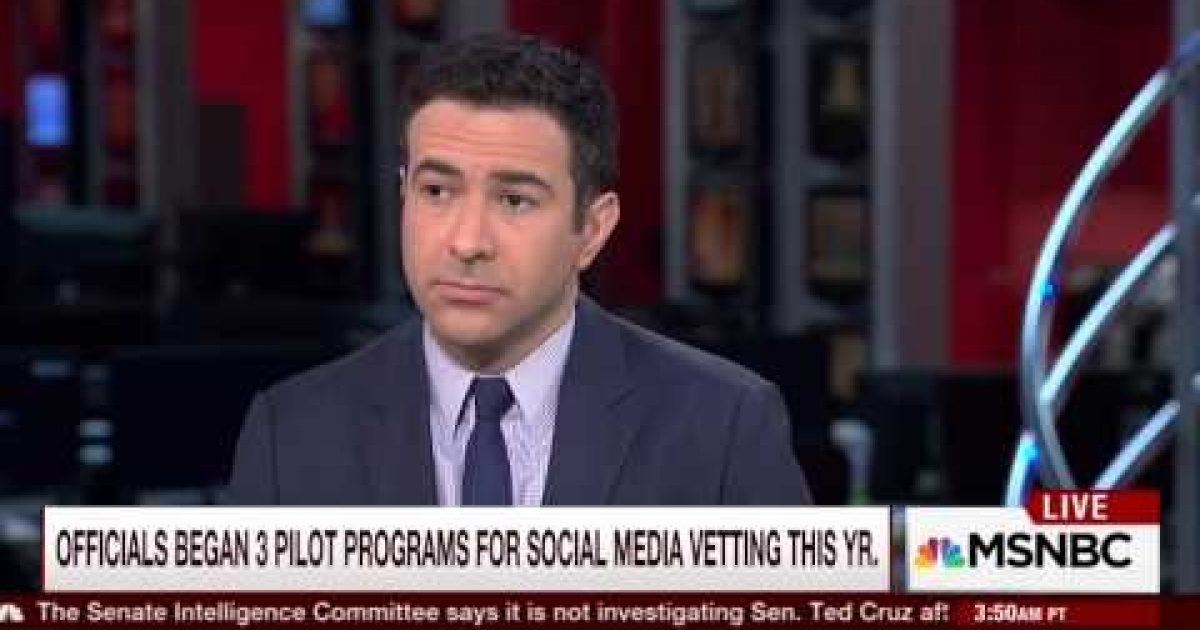 According  Department of Homeland Security (DHS) memos obtained by MSNBC (yes that MSNBC) senior officials at the agency considered and ultimately rejected a proposal to use social media accounts of  visa applicants as part of the vetting process.
This issue has received particular focus in the wake of the President’s decision to invite 10,000 Syrian refugees to the U.S., and the recent terrorist attack in San Bernardino. Originally it was reported that one of the terrorists, Tashfeen Malik was given a visa despite the fact that her social media showed her to be a radicalized Islamist, that report was disputed by the FBI.

The memo from 2011 (embedded below w/redactions for selected operational details) spoke to what many Americans are calling for, a review of social media, for people who are applicants for visas.  It outlines how officials could use social media to vet visa applicants abroad and inside the United States.

According to MSNBC’s Ari Melber (see video below)

It said national security can one of the reasons you would want to look at this. At this time we have a source, the former official who said not only was this not done but people in the customs offices had firewalls from preventing them to get on the sites. While the U.S. visa screening process does not include formal vetting of social media accounts, the memo proposed the Obama administration “authorize” customs officials to “access social networking sites” to vet applicants. Such vetting could help catch applicants bent on fraud, crime, or “national security” risks, the memo stated.

After it was first written, the memo was subjected to a year of tinkering with by agency lawyers, privacy officers and senior staff according to Melber’s source. And just before it was about to be distributed as policy a senior DHS official kicked it to the curb.

“I thought it was a done deal,” said the former official, who would only speak anonymously about internal security discussions.

“It’s unusual to go through the circulation process and revisions,” the official said, and then have a policy “not happen.”

“We are at war now,” the official added, “and we need all the tools we can get.”

When MSNBS checked with DHS about the story, the officials did not dispute the memo, but emphasized more recent efforts to vet social media accounts.

“The Department is actively considering additional ways to incorporate the use of social media review” for vetting, spokeswoman Marsha Catron told MSNBC, noting that the department began “three pilot programs” for that kind of vetting over the past year.

She said that officials must also ensure any vetting follows “current law and appropriately takes into account civil rights and civil liberties and privacy protections.”

There should not be any privacy concern, social media is an open public “space,” there is nothing private about it. In fact business frequently (and legally) check applicants’ social media before deciding to offer them a position.

[David] Schanzer, who directs a terror and homeland security program at Duke University, also argued that visa applicants “don’t have constitutional rights” protecting their information, so he was especially “surprised” the DHS would reject the proposal. Some customs officials caution, however, that the legal rules can be complex, since screening also affects residents who are inside the U.S. and have various legal protections.

The MSNBC sources said they don’t know it was implemented whether memo’s vetting program would have prevent any of the recent terror attacks. What the memos do reflect they claim how the present administration has put the kibosh on security reforms in recent years.

This is another indication that the Obama administration believes that political correctness is a greater priority than the safety of Americans, because every  hour a social media vetting program is not implemented, the chance of a terrorist being allowed into the country increases.

Now to be fair, the Obama didn’t kill all security reforms, under Big Mama (Janet Napolitano) DHS warned about conservative bloggers and activists, pro-life groups, and of course any law-abiding citizen who owned a firearm.

Below is a video of Ari Melber explaining the newly found memo, and under that is the three-page memo itself.

Rusty Weiss has more on the story at Mental Recession

Cartoon of the Day: Justice is (half) blind
April 11th, 2021 Liberty Unyielding