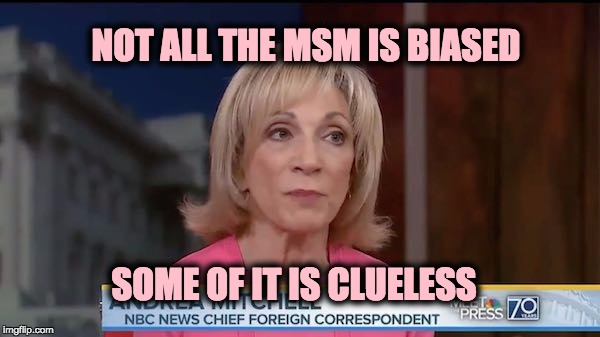 Perhaps this is why no one trusts the mainstream media anymore? Conservative media (including this site) has been reminding people for the last week about the Politico story from back in January that PROVED (with named sources, comments, and evidence) that the Clinton campaign colluded with Ukraine to damage the Trump presidential effort.

Here at The Lid, we covered it as recently as Monday morning, the day before Trump Jr, released the emails setting up the Russian lawyer meeting. The original Ukraine story was broken by Politico reported in January.

But as mentioned earlier this week, the MSM needs a Trump “scandal” to overreact about . Therefore:

“The MSM is trying to convince the country that Donald Jr. not only knew he was meeting with a Russian spy but also colluded with her to damage the Clinton effort. Soon they will probably claim that at the same Junior provided the Russkies some of America’s greatest secrets such as the ingredients to Colonel Sanders secret fried chicken recipe. But while they are trying to convince America that Donald Trump Jr. provided the Russians with Coca-Cola’s long-guarded “secret formula” known as  “Merchandise 7X,” which is locked inside an Atlanta vault, they’ve ignored the Politico exclusive about the Clinton campaign’s serious collusion with the government of Ukraine to destroy Trump’s candidacy which ended up costing then-campaign manager Paul Manafort his job”

Politico  actually found the people involved, talked to them about the collusion, and showed evidence of the so-called “collusion” taking place. Here’s the thing, we didn’t really “care” back then because we all understood that this was not collusion. It was dirty pool, it was underhanded politics, but it wasn’t Clinton promising Ukraine that she would do for them if they would do for her. Yet, somehow, even though we have proof of Clinton doing exactly what Trump is being accused of doing… only Trump’s alleged sin matters. Even worse, unlike the Clinton case, there is NO EVIDENCE that Trump and Russia ever worked together to undermine Clinton the way Clinton and Ukraine did to undermine Trump. Nor is there any evidence that Jr. passed along the chicken, or Coca-Cola recipes. And just in case CNN makes the charge, Trump Jr. wasn’t even involved with this missing recipe detailed in the movie “What’s Up Tiger Lilly?’

You may think that I am joking about the recipes and maybe I am, but does anything the MSM say about this president or his family surprise you?

When Trump tweeted about the miscarriage of media justice:

Brian Williams (who claims to have created some of the recipes mentioned above) and Andrea Mitchell whose lips are continuously planted on the “tush” of Hillary Clinton because she loves everything she says and does so much,  had no idea what Trump was talking about!

Williams was completely ignorant of what Trump could be talking about (perhaps he was in Syria battling Isis, or maybe with NASA designing the rocket to Mars), so instead he begged his liberal pal Andrea Mitchell for some clarity on the issue, but even if she knew about it, she has been told if she ever says something bad about Hillary her face would begin to melt away like those two germans who didn’t close their eyes in ‘Raiders of The Lost Ark’ when the holy Ark was opened.

Brian Williams: Andrea Mitchell, I said earlier no public events for three days on the president’s calendar. He leaves tonight for Paris, for Bastille day celebrations. What we’ve heard from the president again, three minutes ago on Twitter, I’m hoping you can help me decipher this: ‘Why aren’t the same standards placed on the Democrats. Look what Hillary Clinton may have gotten away with. Disgraceful.’ Do you want to take a whack at that?

Andrea Mitchell: I’m trying to figure it out myself. Earlier he called it a witch hunt, so he’s still on the fake news or what the Democrats are doing, that combo. Perhaps this is a reference to e-mails, since his son voluntarily tweeted out a whole e-mail chain. Nobody was forcing him to do that other than the questions that were raised by The New York Times, and they said they were about to reveal them themselves. So he voluntarily released his e-mails, so perhaps it’s an e-mail reference. But it’s hard to figure out what this is about.

Brian Williams: Let the record show Andrea Mitchell is always game for a challenge, though sometimes the material leaves us with more questions than answers.

Here’s my modest proposal for the folks at NBC… Perhaps, Mr. Williams, Ms. Mitchell (and the rest of the liberal MSM) should consider reading those rare Politico stories that do not rip President Trump. If that doesn’t work, perhaps they can read this blog, I would gladly add them to the list for the daily email. They need to read something that will give them a clue.