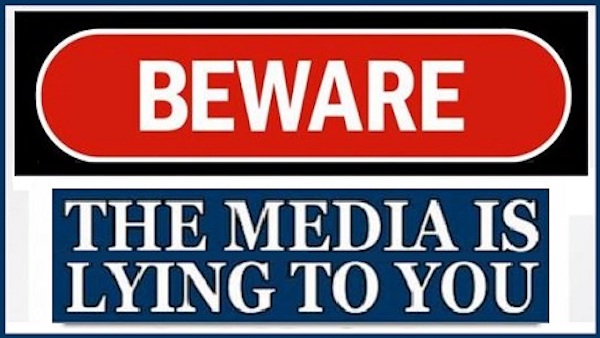 John Nolte who was one of my former editors at Breitbart  and as Onan points out he should be profusely thanked for his constant efforts at unmasking the real progenitors of “fake news” in the mainstream media. This week he has laid bare their lies by focusing his time on one story in particular – the sad saga of former FBI Director James Comey.

Over the last week or so the media has breathlessly reported on every little whisper that has escaped from Washington, D.C. and for the most part – much of what they’ve told us has been wrong. Sadly, this is a common refrain from today’s media who can’t seem to get out of their own way and constantly seem to be tripping over their own failures and falsehoods. It’s almost as if the media has an agenda that they are trying to promote and they are willing to sacrifice their reputation if it means pushing that agenda forward.

In their attempts to use the Comey story to undermine the Trump administration they’ve sacrificed every iota of reputation and been unmasked as the biased hypocrites we’ve always suspected them to be.

But don’t take my word for it – check out the 8 times they got the Comey story wrong in their attempts to hurt Trump this past week.

VIDEO: @NewsHour backs up @SHSanders45, says “inside the FBI, morale among agents has taken a beating months before” Comey’s firing. pic.twitter.com/4H89s8aPhh

4. TRUMP IS INTERFERING WITH THE F.B.I. INVESTIGATION INTO RUSSIA!!!

5. TRUMP LIED ABOUT COMEY TELLING HIM HE IS NOT UNDER INVESTIGATION!!!!

6. THIS IS THE ‘SATURDAY NIGHT MASSACRE’ ON STEROIDS!!!

8. THIS IS THE BIGGEST SCANDAL IN YEARS!!!

Nolte does a good job sourcing out the proof that these stories were lies but i’ll add some more background to the last few.

#5 – Nope. We’ve got the word of two leading Senators from opposing parties to back Trump on this one.

#7 – There is nothing to cover up look back at #4, and #5. New acting FBI Director Andrew McCabe explained that the Comey firing will do nothing to slow the Russia investigation.

#8 – Firing a bad FBI Director (that people on both sides of the aisle were saying should have been fired months ago) cannot be more egregious than the Benghazi Scandal, the Fast and Furious scandal, or any of the dozen other major scandals the Obama administration muddled through over the last 8 years. It. Cannot. Be.

The truth of the matter is that there is nothing to see here. There never was, there isn’t now, and there won’t be in the future. President Trump has done nothing wrong when it comes to Russia or Comey and the only reason the Democrats keep harping on this is because they have nothing else to talk about. They have no new ideas. Their old ideas destroyed our economy. Their old leaders are the same as their new leaders and no one in America like them. So, they keep talking about Russia.

Read the Rest of Nolte’s piece at the Daily Wire.